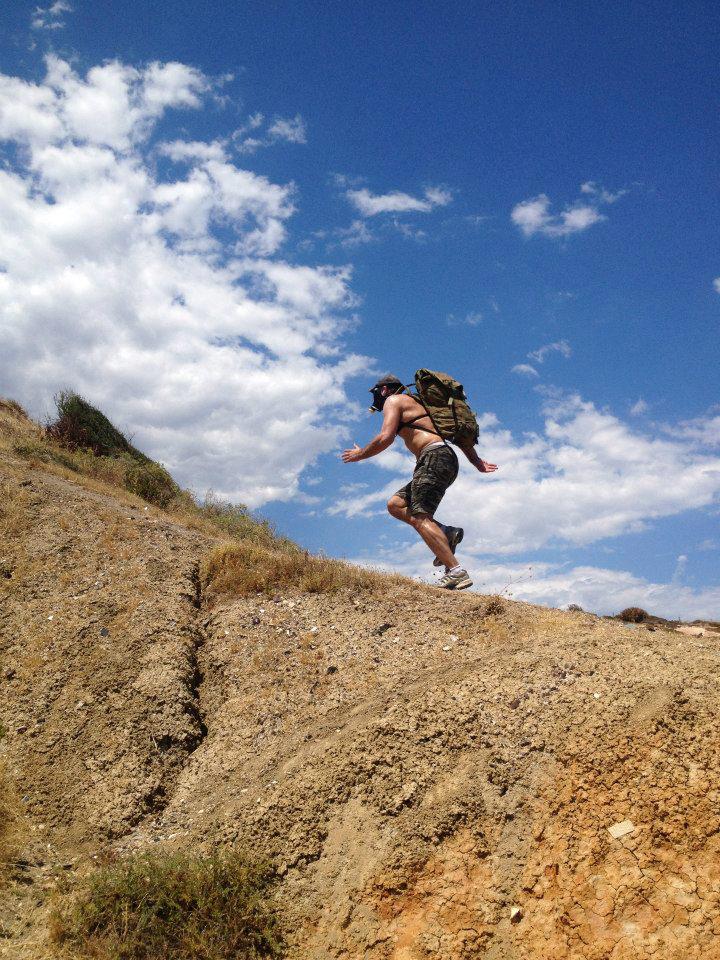 Sandals and Socks until I die

Sandals and Socks until I die.

It is no secret that I have a fondness for sandals and socks. I have found that over time the combination is both convenient and comfortable that offers a utility which the trendier ‘thongs/flip flops’ happen to lack. The utility of such attire however has taken on an almost socially unique condemnation, affording the wearer a weirdo status. I have often found it interesting that such a supreme and everlasting item of footwear is the subject of such sour and unwarranted attacks.

When I first started to wear sandals it was simply for two reasons. One, as I mentioned above, they are incredibly practical and efficient but also they were the footwear of choice of some of the most masculine men I have ever known, my uncles and grandfather. They would wear such footwear in all climates and terrain while performing great tasks. Hybrid men of eclectic abilities in both the practical trades, to being worldly adventurers while also, in the cases of my uncles, holding ranks as academic giants within their fields. These Quartermain etched men helped to forge my visually awkward but universally effective fashion.

I have observed that much we hold dear in our culture is in conflict with such a practical utility as the sandal and socks. Where fashion and the illusion of style and what is contemporary and considered normal for certain demographics should be adhered to for fear of criticism and condemnation. It seems that despite this awareness of what one should dress like or how they should present themselves based upon a ‘group’, many still consider themselves individuals seeking self expression. All the while utility and true uniqueness be damned!

I have often since I was very young been called a ‘Scotsman’ by my Father due to my sense of thrift and instincts to conserve. I have never found a real need to seek glitz and style for its own sake, I am quite happy to wear plain and generic clothes while using objects and devices until they are well past their death throes. In fact my favourite training shoes are still a pair of sneakers a good friend threw my way several years ago after he himself had well and truly used them. Is this sense of thriftiness archaic? Or has a culture of obsessive consumption overtaken much of society?

Perhaps in some ways I lack a pride when it comes to one’s own presentation. Or for my own awareness I simply do not care about such menial matters. I consider these values with such little regard that it seldom offers much thought. Found within myself is a set of interests and values which transcend shiny or luxurious objects, personally I prefer the usage of an item to how it looks. A fact which I know pains many of those dear to me.

I am not anti-consumerism nor am I an elite who frowns upon others interests in such decorative attire or collections. In fact, I am the opposite to this. I would gladly argue in the defence of such acts or such an ‘ism’. The very essence of coercion and mandate burns bitterly against my core especially when it comes to ones own self interest. What I am however interested in is why individuals themselves seek a dependence on social norms. To hide amongst the ranks of strangers because for a time such a fashion has been deemed acceptable. This is an exercise for one’s own mind and not for a study nor policy but merely an esoteric question for one’s own self.

This set of values of fashion is not locked into the simple codes of dress, I would dare to extend it to practices and customs. Why is it frowned upon and considered geeky or nerd like for a small group of guys to sit around playing a fantasy role play game while another group are considered normal should they intoxicate themselves into a stupor at a front bar or in a pay to enter venue? Why is it considered okay to sit behind a computer screen and play Call of Duty with strangers than it is to drive model tanks on a pool table with friends? It is such similar though socially opposed acts which often confuse my thoughts from time to time.

Yet despite many peoples reliance on the determination of populist depictions of style according to a clique or based upon a celebrity jester’s own sets of expression (however manufactured or custom made) there still remain those who vomit hatred towards ‘capitalist consumerism’. They may very well fit a stereotype themselves, the privileged professional student so dependent on the culture which they forsake as they study a degree with little practical value outside of the education industrial complex’s own self perpetuation: these stereotypes in themselves may crudely recite Marx or Mao from their latest iPhone or protest march down a street in a pair of Nike Frees. All the while never truly aware of their own self deceptions and putrid hypocrisy.

I find it with some frustrated interest that I personally lead a life more in accordance to practical Marxism than many of those who actually wish to FORCE others to adopt it. I personally feel a need to scream at the top of my lungs or rant into a keyboard the virtues of liberty and capitalism while I earn less monetarily than many of these apparent Socialists do. And yet all the while these apparent anti materialists are so obsessed with the material possessions of others and just how much they are entitled to it, all the while dressing themselves according to a socially accepted material standard. Consuming if you will, at the tit of the very market place which they seek to destroy or overpower via collectivised means.

If one spends more time in front of a mirror modelling themselves according to how they feel others expect them to look or how they themselves want others to see them, than they do in the advancement of their mind or actual functional health. Then therein lies a self deception. Grooming is one thing but considerations according to the cultural meme of the moment is an unhealthy imbalance. It is in my estimation a very dangerous consideration to have at times when it comes to one’s own passive self representation.

The idea of ‘cool’ is not supposed to be about following others. It is about being an individual against the odds of conformity which rebel both stylistically and conventionally. It is about not caring about what others think in regards to who you are or what you are. Cool is supposed to be about setting a trend and not following it. The Fonze was cool not because of his interest in following the conventions of others, but because he was his own man that inspired others’ interests or affections. Though even the Fonze would become so stale as to jump the shark when he began to do things more for the need of convention and less because it was his individual instinct.

It is not a Randian selfishness to walk against the grain, nor is it a Stallinist obedience to follow the norm. It is merely an idea one should investigate from within themselves when it comes to how they conduct or present themselves before the crowd. Nor is it a Hipster attempt to reject the contemporary by creating its own set of contemporary populist clique. It is simply being who you are and not assuming to be something or someone that you think others expect you to be.

In an age where many in our culture are obsessed with items being the ‘latest’ or newest, little care is placed on longevity of a product. It is no wonder that an ancient piece of footwear is so forsaken. The problem lies in those who denounce thrift. The very people who no doubt thump their chests at ‘environmental causes’ all the while consuming products with the decadence and obsessive opulence that would have Nero drooling with envy. Without any sense of perspective, no doubt due to their goldfish memory in regards to history, it is quite hard to imagine a world without digital application or where fashion was about function and protection as opposed to status and image. It is with a self consumed sense of deluded illusion that a great many celebrate their own arrogance in all areas of understanding to the past and even the present. Individuals simply churn through material and products with an appetite so ravenous that industries must invent inbuilt obsolescence so as to satisfy this traditionally idiotic market demand.

Previous generations would no doubt look ahead with a sense of shock and awe and perhaps envy but no doubt ultimately with a sense of disgust. If many supposedly concern themselves with issues of sustainability and look to the most wasteful entity in existence, the State, to address it while they themselves consume and abuse earthly resources with the recklessness of invading drunkards, one must simply sit back and shake their head at the futility of such hypocrisy. A hypocrisy so widespread that it is fashionable.

Perhaps at times a sense of ‘fashion’ is a desire not to offend or to rock the boat. This is perhaps the establishing factor of fashion. Those who are so easily offended by passive expression of one’s own self are themselves offensive and any boat so easily rocked by a person’s fashion has never been out to sea. A peacock takes pride in the apparent beauty of its feathers, while the eagle celebrates the efficiency of its talons and the owl is appreciated for its wisdom. We have perhaps too many peacocks and too few owls and eagles but that peacock is damned trendy.

As a societal whole it is a weakness to obsess over an image and grooming, to focus on not the practical but style and to forsake efficiency for perceptions. Whether this is the culture of policy, institutions or society at large, it is a dooming trait. In the end it will only burn out those people of practical ability, stifle unique creativity and disregard innovations into utility and effectiveness. While replacing these qualities with self perpetuating academia, un-dynamic drones void of any initiative and fluid instincts to non offensive politically correct customs all the while disregarding the very diversity which it apparently sought to promote. Dystopic an assumption it indeed is but such traits need only to maintain an unsandled foothold over time.

So it is because of much of the above that I enjoy my sandals and socks. But, put simply in less words, it was in sandals that the Greeks under Alexander conquered the known world, The Roman Legions brought light to the Barbaric darkness, that from Carthage her greatest enemy marched through the Alps, that Central Asian tribesmen climbed like mountain goats and bloodied three Great Modern Empires, that the Viet Minh and Cong ejected four Colonial Imperialist nations from its lands and even today such footwear is still so common place all over this great Earth. I suspect that in another thousand years, despite our faith in technology and the depictions we allow ourselves to imagine, human beings will still wear sandals just as they had before the Bronze Age. And despite the ancient design of the wheel it still remains much unchanged but its utility of efficiency only betters society as a whole.

It is because of those reasons that I shall wear sandals and socks until the day that I die. This in no way makes me any better than you, it simply is a point of indifference to your opinion.