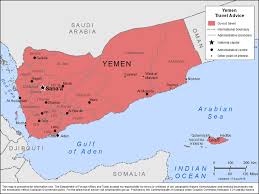 The trouble in Yemen

The crisis in Yemen that most in the West do not care to understand. (from August 2015)

The silent war in Yemen illustrates the perpetual hypocrisy and Machiavellan savagery that is Western hegemonic policy. The Saudi military, with US support in arms and advisors, continues to attack and ravage the Yemeni nation. It is a case of those in the poorest Persian Gulf state defending themselves from outright Imperialism from the most powerful of the Persian Gulf tyrannies, Saudi Arabia. It is a case of the Saudi regime attempting to reinstall the overthrown regime of President Hadi. The Yemeni regime that was overthrown earlier this year when Houthi tribesmen from the country’s North took the Yemeni capital in an attempt to set up a freer and less corrupt government.

Saudi Arabia has had an influence in Yemen both directly and indirectly for quite some time. The large Kingdom assuming custodian at times over this impoverished nation whenever it feels that Iran may in some way find influence through the minority Zaidi sect of Shia moslems in the nations North. Before the Saudi’s felt they had the right to control and manipulate Yemen as they so pleased, it was the British who left the region after fighting one of the last Colonial campaigns in the region in hopes of keeping the South Arabian peninsula inside the folds of the Empire. And now with such a history of external manipulations Yemen once again finds itself being ripped apart from both within and without.

When the US led coalition intervened in the Gulf in 1990-1991, it was because the rich kingdom of Kuwait had been invaded by war weary Iraq. The United States sent forces to Saudi Arabia along with a large coalition in the defence of the Saudi kingdom and in an effort to liberate the Kuwaiti monarchy. Apparently the threat of Iraq was too great for these rich Arab kingdoms. Saudi Arabia, a nation with an impressive military, having needed the assistance of most of the World fifteen years ago now finds itself again invading and attacking insurgent elements inside of Yemen with support from its American allies. Yet despite this, and despite the confused battlegrounds as far as the many warring groups go, Saudi Arabia and its coalition falters in its bloody efforts.

Calamity and catastrophe savages Yemen as the continued attacks from Al Qaeda, the Saudi invasion as well as a decade long drone strike campaign from the US has destroyed much of the small and impoverished nation. Meanwhile the world ignores what is happening as starvation and disease spread, while military powers destroy the populace with an Imperial zeal. Yemen being the only republic in the region with ancient civilisations provides a paradox when compared to the oil rich recently created monarchies and sheikdoms which so dominate the region with their wealth and influence.

After the 1990 reunification of South and North Yemen, the country has been in a state of unease. The predominantly Zaidi Shi’a Muslims of the North, with some alleged support from Iran, have become known for the most part as Houthi. It is with a complex power struggle that they find themselves in conflict with most of the factions in Yemen, including the Saudi led Arab coalition with American aid now invading the nation.

In the South a secessionist movement made up of urbanised Sunni Muslims have formed a coalition which in itself fights other factions of the conflict in an attempt to leave the unified State to form their own South Yemen. Corruption and secular disharmony has led many into this decision. The Southern separatists are opposed to both the Hadi regime as well as the Houthi tribesmen from the country’s North.

Al Qaeda has a tremendous influence in Yemen and it is rumoured that most of the organisation is now situated in the region. Al Qaeda finds itself not only fighting the Houthi, but also the various Sunni factions, the Yemeni government as well as the United States military. This is however only when the US is not using the terror group as proxy allies against the Northern Shi’a Houthis.

The Popular Resistance Committee (PRC) in the South, itself another Sunni faction, focuses most of its efforts in combating Al Qaeda. They do this with some support from the failing Hadi regime. But for the most part the PRC has done this on its own and is having the greatest success against the terror group. Pushing Al Qaeda back as the PRC claims a great deal of what was once Al Qaeda dominated territory.

Though the main fight is between the Houthi and President Hadi’s regime, all factions oppose Al Qaeda in Yemen. The Houthi have claimed that they support a transparent government and democratic elections, with a dual power share of Shia and Sunni to be worked out once hostilities end. Many however fear that they are merely puppets of the Iranian Government who seek a proxy ally so close to their rivals, Saudi Arabia.

As the Arab spring in 2011 destabilised many of the corrupt and despotic governments in the region, Yemen too experienced its own form of the Spring. Though corrupt, the pro-US government was overthrown in a popular revolt to be replaced soon after by President Hadi, who was elected in an election in which he was the only candidate. Hadi held ties to the old regime of the pre-revolt era and his rule soon turned out to be corrupt and ineffectual for the people of Yemen. This combined with the fact that President Hadi, who was meant to have stood down in February of 2014 in accordance to the nation’s laws, continued to rule due to an amendment written for his benefit in January of that year. A new law which was invented to extend his rule due to the National crisis affecting the nation. This eventually led to not only the Houthi fighting the regime on charges of misconduct and corruption but also some of the other factions of non Shia origin. Though Iran has been accused of inciting the Houthi and supporting them, the Iranians deny this and in fact have both recognised and supported the Hadi government.

To further complicate issues, a variant of what is generically known as the Islamic State has emerged in an attempt to set up franchise in the troubled region to further tie up both Shia and Western resources in an effort to spread their form of global jihad. While the Islamic State elements have struggled to gain much footing it does however add another dangerous element to the crisis.

Though the Houthi are a minority group and have dissolved parliament they have claimed to seek a five member presidential council with a limiting two year leadership. Whether the Houthi’s are genuine in their aims for a freer and fairer government that observes the rule of law is ultimately unknown. Meanwhile President Hadi, having fled to Aden, has set up a de facto capital where he leads his somewhat split government in its multi-faceted fight to remain in power of Yemen.

Yemen has become a microcosm of regional politics. It has become in some ways a Persian Gulf Balkans with complicated relations and alliances being tested, events being manipulated from external forces and all the while it is the civil populace who suffer as food shortages and diseases are rampant. Not to mention the frequent deaths and injury caused by the regular fighting and shelling destroying human life across the country.

Yemen has been all but ignored for some time by those in the Western mainstream media. It has been a crucial battleground in the United States fight against Al Qaeda as drones target many suspects, killing more innocents than the intended ‘suspected terrorists’. As they had attempted in Iraq, Al Qaeda hoped to unite the various peoples of Yemen in a fight against American influence but instead they were brutalising the populace and soon found themselves in a many front war against those who do not want them there. This however does not give the US and the other members of the Gulf coalition (Jordan, Egypt, Morocco and Sudan) led by Saudi Arabia a warrant to manipulate and control this already suffering nation.

Like most political leaders in the region President Hadi is no doubt all of the things that the Houthi and his Sunni opponents have accused him of being. But when and if he is toppled completely, will the vacuum be filled with a worse regime or regimes? And, if so, will the US and its Arab allies allow this to happen or will they continue to manipulate Yemeni governance assuring that such proxy puppets stay in rule. Yemen is unfortunately a battleground of so many interested parties and the only certain outcome is that a lot of human beings will suffer but who will have ultimate ‘control’ is less certain. Innocents will die and find misery and all the while political elites and powerful men will seek to savage each other and those in their grasp all in the name of stability for themselves or some hegemonic power play.

As Syria and Iraq suffer their own multi-faceted and confused conflict caused by foreign interferences and interventions, so shall Yemen though on a ‘smaller scale’. The humanitarian crisis that is both of these conflicts is however far from slight. Just like Syria-Iraq the fighting factions battle one another, juggle alliances and the apathetic viewer seeks to simplify the conflict at the behest of a manipulative government above them. It is a conflict more about its many omissions than it is about its admissions. This can be said for all conflicts, but perhaps none more so than for such recent ones as we find burning up this region of the world. Just as is the case in Syria-Iraq much of the cacophony of calamity is directly related to US and Western presence, policy and interventions. Animosity and hate will billow from this region for some time and an ever perpetual war shall go on while many in the region fight each other with age old hatreds reinvigorated by modern circumstances interspersed with new players of violence.

Many in the region continue to feel that the Crusaders have never left and maybe never will. So while an observer in Australia may look on with confused interest and hope that the Australian military may in some way help to solve the conflicts in alliance with the US, as is the case in Iraq, bludgeoning foreigners on their home soil fighting a complex struggle has never and shall never resolve or attain anything other than to prove much of the condemnation being thrown at the West as being correct.

The Saudi Arabian and American track record for supporting dictators and vile regimes is ever apparent and well known. The notion that either are fighting for ‘democracy’ and a freer society is a fairy tale but, like most conflicts, one cannot seek to find heroes or villains. The people of Yemen have been subjugated to colonial rule, proxy despotic rule, terror, foreign imperialism and tribal plunder for a very long time. Much of this conflict has very deep roots which are only now being torn up as the tinder box that is the region has been ignited from so many conniving and careless matches. While the arsonists proclaim legitimacy and some moral intent it is the people on the ground who suffer the most as their world burns down around them.