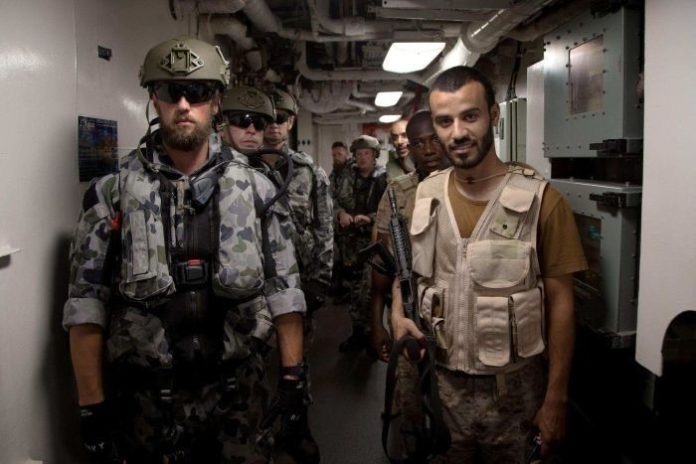 RAN and the Saudi blockade of Yemen

Australians love their military. Their adulation for the men and women who serve the nation perhaps ranks with the most militant and jingoistic countries of the Earth, countries that Aussies can call mates.   To question the conduct of the Australian Defence Force is often a posture of pariah politics and tends to taint ones credibility, even if the deed is so terrible that it needs to be condemned. The Australian military has in the past conducted itself with less than honourable friends as far as the consequences to the innocent go.  In its participation with the Saudi Arabian blockade and war on Yemen it finds itself on the dark side of history.

Yemen has suffered the tumult of instability and crisis for decades. It is with a combination of past conflicts and a need by the new youthful Saudi regent to emasculate himself and the Kingdom at the expense of the poor Yemeni people that we see the World’s most powerful nations joining in.  With fractured internal politics thanks to outside meddling, most notably from Saudi Arabia, Yemen is a hotbed for various factions now fighting for control of the broken state.

Saudi Arabia along with its Western backers wants to see another easy to control despot in power to ensure it can malign any potential for independence but most importantly to ensure that its arch nemesis Iran has no sway or influence whatsoever in the region. With this simplistic goal the war has waged on between those who want an independent South, the pro Saudi elements, the Saudi coalition, Al Qaeda and other tribal elements with varying allegiances in what can only be described as a complicated mess.

The simple narrative is that the pro Hadi (the former dictator) forces supported and recognised by much of the World, in short, a Saudi Arabian puppet is attempting to regain control of the country with the aid of his backers.  These forces are fighting the Houthi a regional tribe that has intervened after Hadi lost an election, the Houthi because they are predominantly a Shiite sect are deemed to be supported by Iran and thus considered a future Hezbollah by their enemies.  Throw in other more confusing elements and you have the armed groups inside of Yemen.  Despite their presence and ability to fight, millions of unarmed civilians suffer regardless of stated narratives.

Australia in its obedience to its allies and an interest to secure “stability” in the region cooperates with the coalition that is fighting the people of Yemen.  The Royal Australian Navies true role is uncertain but naval vessels have operated in this area for some time. Notably in “anti pirate” operations against Somali locals while also ensuring the wealthy Gulf States have another friend to deter an aggressive Iranian navy should it leave its territorial waters in the Persian Gulf.  Because of its proximity it is easy for RAN vessels to perform anti Yemen related tasks under a broader context.

The RAN is one of many that intercepts foreign vessels as they cross from central Asia and head towards Africa.  Contraband is searched for on these vessels, depending on the destination and what it happens to be found, it is then either turned over to their American allies, should it be weapons. If “drugs” are found, then they are dumped into the ocean. Despite the anti-drug operations, some of which may be medicines for crisis points, RAN sailors at a higher rate seem to enjoy the use themselves despite such operations.  What the United States has done with intercepted weapons caches is uncertain but open for enlightened speculation. Despite this, Yemen and the region are rife with weapons most of which were suppled to various groups long before the present war.

The Australian state run media and its mainstream news have recently reported that the RAN has participated in joint operations with the Saudi maritime forces.  This operation known as Manitou occurred during mid-August of this year and was under the guise of garnering greater cooperation between the two nations in a hope of safeguarding the regional waters. Meanwhile during this joint exercise, the Saudi navy was conducting its blockade as its air force bombed more civilians than fighters inside of Yemen.

The ability for the Australian government and defence planners to remain amoral on the issue is not new, this has been seen locally with the Papuan New Guinean conduct against Bougainville and the Indonesian militaries execution of operations against Western Papuans recently and Timor and Dili in the not too distant past.  It is easy for the Australian government to talk about human rights while knowingly assisting friendly sovereigns in bombing and starving to death millions.

Even should further revelations come out that the RAN was all out participating in the blockade in a more direct manner it is likely that the Australian public will remain mute.  Aid organisations can call out Australia as they have recently over the exercise, but this is meaningless when an indifferent majority is unable to find a common course with a dirt poor populace perpetually suffering.  Most of all however the brave sailors of the RAN are above reproach.  It is important to support and adore them despite their friends and those that they enable with their service.

In the great scheme of historical context Operation Manitou will be forgotten and is one in thousands of such operations that tie bonds between those who enable, train and supply and those with the blood on their blades.  Should the Australians help to sharpen and offer expertise in the usage of such knives, they are not culpable in where their Saudi friends stab them.  At least that is the moral disassociation that many inside Australia hold.

So, while Australian naval vessels cross the vast distances from home ports to enjoy the opulent luxuries inside their wealthy Arab host nations they do so knowing that they have the full support of their public at home. They are well paid, well-armed and a part of a coalition of ‘benevolent’ killers. The people inside Yemen and many other parts of the world for that matter shall go on suffering, they will die from starvation and disease if not from Saudi bombs.  Western made bombs dropped from Western made jets flown by Western trained pilots filled by Western fuel from Western piloted refuel aircraft.  But it is Saudis war on Yemen.

When they come home like many veterans, even those who have not seen direct conflict the Australian sailors are statistically at a higher risk of addiction, depression and suicide.  Perhaps the morose of merging factors culminate to heighten these conditions. The indifference to the political masters and the public that claims to adore them however remains knowingly ignorant of such despair.  The sailors in the end are disposable. Perhaps the moral turmoil that heavy drinking, discipline, pay and pride in service blankets eventually etches away revealing a cold cynicism that in the end consumes them with a darkness.

In no small part their conduct in the region, assisting in the genocide of the Yemeni people will come home with some of them. But the Australian Government and public are ok with this.  So long as more sailors enlist, more ships sail Westward, and our allies praise us adoringly then all is well in the service.  For Yemen, no one cares.  Millions of innocent human beings dying, suffering, doomed to tragedy like Darfur before them, Biafra before that and in the distant past perhaps Carthage, should they all be destroyed then no one will remember them. Then it is ok to no longer care.  That seems to be the bloody consistency of it all.  “Serving Australia with Pride” Royal Australian Navy.