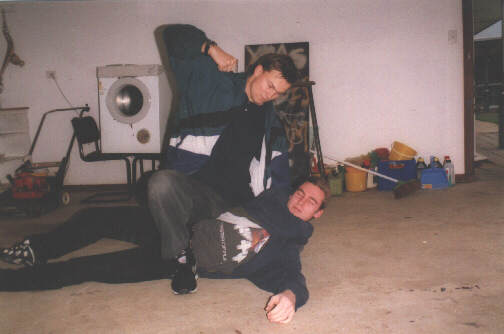 These were various pre-emptive combative engagement strategies drafted up at the commencement of each year.  Each was in place to help provide a framework for the years training and to ensure that a combat template was in place should one face threats.

If opponent/s intentions are recognised as being hostile, their hostility will be met with a ‘ counter ‘ (pre-emptive strike); the ‘ first flood ‘ in theory should put them to the ground or harm them sufficiently.

If hostile intentions continue an onslaught will smother them and will continue until their aggression desists.

A basic doctrine has been devised concerning the force and technical applications that are to be used in various situations and on various opponents.

In the circumstance of engaging a female or someone smaller, physical conflict will be avoided at all costs.  However verbal abuse can be used, if they intend hostilities, evasion and bluffing will be used.

In a single or a multiple opponent scenario if the fight is real, strikes and techniques must have knock out potential.  In a multiple scenario, striking will be the prime strategy.  Attempt to stay standing.  Against a single foe, if conditions allow, the altercation will be dominated by grappling.

Attack on the opponents centre line will be followed by a take down.  CES will be determined by the situation.  But a strong and powerful offence is the key.  One hundred percent aggression must be utilised, while maintaining an inner calm.

In the one onto one scenario ground fighting is the chosen strategy, ultimately the opponent will be blitzed with strikes starting from long range into the clinch.  When on the ground Submission techniques and chokes will be employed to limit overall damage to the opponent.

When facing multiple opponents, fast and vicious combinations will be used but if forced to the ground, an opponent, preferably a smaller one will be choked out or subdued and then used as a ‘ shield ‘.  Fast and rapid strikes and grappling techniques will be used during both the standing and ground phases of the fight.

With an armed opponent trapping and locking the weapon carrying arm will be attempted.  Isolating the weapon arm is not the only strategy as attacking the opponent has other limbs.  So fast locking and smashing techniques will be used.

Self-preservation is the goal, both physically and mentally.  All techniques will have a purpose, as the opponent/s are defeated accordingly to their level of threat and what they have done.

Fast and dynamic offensive movements and interceptive attacks are the main strategy, striking through the opponent, followed up by furious takedowns.  Weapons are a key tool when facing multiple or armed opponents.  Total assault on the opponent/s with aggressive and fast force.  Fast and effective striking and grappling techniques which will develop combination, submission and knock out attributes.

When facing an armed opponent, isolation of the weapon-wielding arm is of prime concern.  The use of other weapons to defend against a weapon-wielding opponent is a crucial tactic.  When facing multiple opponents’ movement is essential; preventing the opponents from encircling you and trying to get them to retard each other’s attacks is a key objective.  Getting them to stay in front of you or one another may do this.

Interception and pre-emptive offence are the prime initial engagement tactic.  Ground and standing techniques and strategies will be addressed to further progress and develop the effectiveness of the CES and self defence goals.