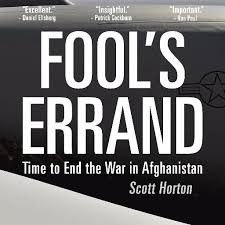 Review – Fool’s Errand: Time to end the war in Afghanistan by Scott Horton.

Fool’s Errand: Time to end the war in Afghanistan by Scott Horton.

Scott Horton has spent much of the past two odd decades giving a voice to the most ardent anti-war activists and minds.  He has never denied a guest to talk because of ideology, race, religion or region instead he has provided thousands of hours of histories for present and future generations to digest and consider.  As remarkable and diligent that this is, it tragically is not enough to stop the futility of human mass violence.  Fool’s Errand is the emergence of Horton as a credible book writer and historian based upon his interactions and accumulation over the decades.

It is a book that addresses the mostly American war in Afghanistan, one that seems rhythmic with its historical beats and bloody thrusts reminiscent to the British and Soviet empires attempts to contain the diverse though brutally rugged region of Central Asia. The information that Horton provides is a constant reminder of hubris and devastation for the region and wider world.

Horton’s prose is to the point and unlike many writers who hold a determined philosophy he lets the events, language and facts speak for themselves with a restraint on excess narrative.  The actors, those tragic and vile but mostly those innocent and unnamed are left to take centre stage.  It does not matter if Horton is a libertarian to the reader, the book does not preach where others do.  It is simply honest, it is anti-war.

The biggest fault of this book is also its strength, it is concise. It reads as though it should have been a segment of a wider totality. It is and was.  The reader can be left wanting more of Horton’s writing and to learn more about the subject at hand. The book is lightweight and a quick read, with easy to find references for those seeking argument or to gain knowledge when it comes to the recent calamity inside Afghanistan.

The book has plenty of footnotes and begs the reader to pursue their own investigations into the many surfaces that Horton has revealed.  It makes this book a key introduction and update to those who claim to know about events or those willingly ignorant.  Horton has provided a desperately needed counter punch to nauseating popular media and state-run drones rattling on with a perpetual push for more war and prideful mayhem.

The book is not a happy read, nor should it be. It is not a difficult read though, thanks to Horton’s writing and lay out.  It gives a universal appeal to even those who shy away from the mature non-fiction realm of books about consequence.  This is a must read for any one who wishes to know, not just about Afghanistan but the terror war and war in general.

It is also a book that the war fighters, the policy makers, the cheerleaders for death, arms builders, private contractor and civil servants of the state machine should dare to read.  Because the power is inside them, they as individuals have the ability to quit or to say, “no more”.  This book and its many foot notes provide them with moral fuel, a spark for dignity to denounce the bloody futility that their income stream ferments.

An important book of our time, Horton though not as well travelled as his peers has the intellect, wisdom and maturity as a multi-media journalist to provide us all with future reads and insights into the many facets of our civilised death culture.