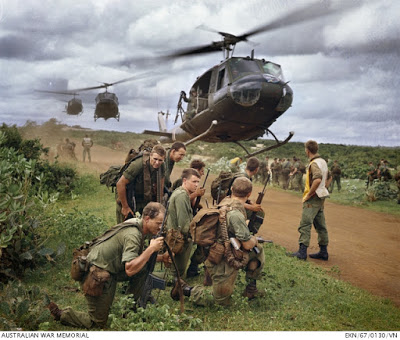 War for the asking by Michael Sexton book review

In 1981 when this book was first written much of the information revealed was no doubt a sobering and cold shower for those interested in the facts when it comes to their governments policies in regards to foreign adventures. This foreign adventure being the Australian entry into the Vietnam conflict.

Australia is a nation that has a confused narrative, it is a young democracy, a European transplant at the bottom of the Asias and a place of self righteous virtue often defied by very sinister foreign and domestic policies. Early on this eagerness at imperialism abroad was done with an attachment to Empire, a supposedly voluntary obedience to the crown and the English way to make the world better and safer for ‘democracies’ or at least Empire and her allies. This lead to an eagerness after Federation to fight in South Africa against the Boer, to fight in Flanders, New Guinea and the Dardanelles in the first World War to eventually adding a declaration of war against Hitler’s Germany over his invasion of Poland in 1939. None of which saw Australia’s military defending our shoes from foreign aggression.

The realities of World War soon revealed an isolation of Australia, that great separation from England and England’s own weaknesses saw Australia seek an attachment to another great power. It was with Japan’s entry into the war against the Allies that Australia now for the first time and only time in its history found itself truly under threat. Japan’s entry had also introduced the United States official entry into the war. It was here that a new ally and loyalty soon began to form.

After the war with the realities of the Cold War, Australia found itself in a confused state between Empire and Americanism. This saw the national governments eagerly lead Australia into the Korean War, Malayan Emergency and operations in Borneo. It was with the growing tensions in South East Asia that Australia much like many other ‘Western’ nations began to view those former colonial states as being distant frontiers, desolate and worthless but integral in checking an apparent spread of World communism. But much of it was mostly directed against independent nationalism surging among former colonial possessions. Communism was often the blanket by which to drape the fears with.

The book delves into the early days of Australia’s interests in Indochina to its jockeying to see an American wider involvement in the region. Many Australian’s have a perspective that ‘we’ were asked to join the conflict and not that ‘we’ essentially invited ourselves and insisted that the South Vietnamese Government ‘formally’ request our forces to deploy.
The Australian Governments interests in the region was based upon a consideration for forward defence, in the belief that somehow the contagion of Communism would spread from nation to nation until finally it was in our streets. Not merely communism but the Asiatic horde that had frightened Australian governments since federation, with the Boxer Rebellion in China and the Japanese victory over Russia in 1905 being two earlier conveyors of this frightful reality. A world where a white (notably Anglo) faced powerful empire lacked presence in the pacific frightens Australian political elites as much as it did then, as it does in this day.

Should the United States find itself embroiled in conflict in East Asia then Australia would have a constant friend strategically located regionally as a safeguard against Red China, fascist Indonesia and even the emerging trading giant Japan. For Australian strategic thinkers needed the United States to direct its attention to Asia and not Europe to make Australian political and academic animals feel safe in their beds at night so that the Moscow and Peeking boogeyman should not stir their sleep. Australia was after all a white blemish among the Asiatic ocean of barbarity, as many saw it.

The book does not cover the war itself, but Sexton provides scores of primary documents and direct dispatches, speeches and facsimiles that show the level of deceit exhibited by the Australian government and the jingoistic corruption of our media in ensuring that Australia enters another war. This alone makes this book a splendid source for references and quotes as far as historical figures go in relation to the war and wider policy.

Now while it is chic to look back on Vietnam as a painful mistake, as though Western adventures abroad can be so relegated as a past err by otherwise ‘great men’. The legacy of such ‘mistakes’ are buried in unmarked graves, continue to poison generations of the unborn and still remove the limbs of children in the distant jungles far from those capital cities that enjoy making such historical mistakes. The war is simply not a distant fog for those inside South East Asia its legacy still stings and seeps with misery, for many of Australia’s political and intellectual elites it is an ancient period simply overlooked.

Now while it would be criminal enough to simply view the war in Indo China as an isolated mistake, and this book depicts clear cynical arrogance and disregard for human misery on the part of key Australian officials, present events and none too distant histories reveal an obedience and trust in our Allies and Officials when it comes to deployments abroad. This married with a nationalistic and constant militant lust for the pornographic and romantic depiction of war abroad the befalls the Australian populace. Such romantic delusions will continue to see Australia near always sending elements into foreign regions, especially as a member of any wider coalition so long as it has a bigger friend to serve.

So while this book may be somewhat dated and many players mentioned are long dead, their methods and those institutions by which they lied ‘us’ and volunteered ‘us’ into war are all the more advanced and wiley. While this may be history, the lessons are clearly unlearned and are instead refined and advanced for the worse.

A key anti-war read while also teaching the many lessons that need to be retaught over and over as far as State torpidness goes but also its outright desire to simply murder in the name of pragmatism and policy.