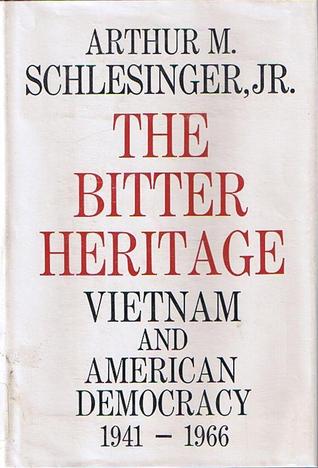 “The Bitter Heritage” is a book written during the intense peak of the American lead war on South East Asia, penned by one of the United States’ more respected historians and regal elites of foreign policy. It is an attempt to find an answer where none can really be found, a satisfactory outcome to a quagmire of destruction and death befalling the people of South East Asia in 1967, when the book was written.

It is not merely that the book looks to depict the then present failures which with retrospect we can see as being inevitable failure on the US part, it attempts to weigh up the declared intent of the various US political administrations to the actual implementations as experienced “in country”. With a prose lingering around the nationalist romance for ‘noble intent’ the book considers less the South East Asians, notably Viets, doomed to their fate than it does to the elusive ideal of national prestige. How the United States can and should eject itself from another’s country with dignity and strength.

The war that became “Vietnam” was the realisation of political theory, where academics, generals and professional bureaucrats toiled inside another’s land so that the perception of safety could be realised. It was a battlefield of declared containment, geared towards halting the communist spectre of internationalist revolutionary bondage.  It was one that seldom considered nationalism and anti-colonialist defiance but instead that of a less civilised peoples in need of salvation, even if it killed and enslaved them.

Schlesinger’s book is American, for the American reader. It is contrarian in a contemporary setting but with the voice of an insider who as McNamara would do decades later echoing regret, voiced with a respect to the dignity and righteousness of the imperial republic. It is respectful and considerate to the great men of American politics portraying their decisions with sympathy showcasing a train wreck that gained speed and lost control over time, accidentally.

The book for those who suffered in South East Asia can be summed up by this sentence, “The Vietnam story is a tragedy without villains.”  It is inconceivable for Schlesinger to suggest or even imagine that what the US government did was wrong, wicked, or even evil. Instead it is a mistake that can be deemed tragic.  This is who the book is for, those who need to be satiated by such illusions. Not for their victims, then, now or tomorrow.

It is a good book to read as it shows what was known then and what omissions found have more to do with the limitations of available sources. The book is full of helpful quotes and colours the meandering intentions of consequential violence.  How men of politics and intellectual lofty abstracts can discuss and then deliver commands and orders to men of action. Men of violence. How those on the ground, in the air and at sea can implement and interpret vague commands and decisions leading to death and misery for those inside Vietnam.

The compliance of the media and the militaries inconsistent information pertaining to its missions, enemy troop numbers and so on are illustrated and show an escalation of misinformation or perhaps incompetence. It is in the earlier chapters where the book discusses the French and American relationship in Indo-China, the support of an imperial ally against a nationalist movement tainted by communist ideals. Up to the much famous domino theories and Laotian expeditions and to the Diem regime and then to the official deployment of US forces despite a steady increase in the months and years before hand.

The language is that of statistics, direct and considerate of those in suits and uniforms. Bombing missions directed against the hard to define Viet Cong or targets of importance in North Vietnam, those inside Laos and then eventually in Cambodia all killed millions.  Millions of innocent, unarmed civilians. Most absent of ideology or loyalty, human beings blow to pieces, mangled and mourned. Those that survived, injured, traumatised and widowed all so that men of policy and men of uniformed action may find glory, etch their own honourable mentions into the pages of history and satisfy just another imperial crusade in the East.  The book does not voice these human beings, though it is in its own way on their side. In that it suggests the death and mayhem should end.  For American reasons, not to save Asian lives.

Though this book to the American reader and its powerbrokers discusses ancient history, for those inside the South East Asia, the American War still causes grief and oozes from the past miserably every day.  The lessons and scars are not there to be learned, instead they are ignored. And so, Vietnam, Laos, Cambodia are now tourist and investment regions despite the fears of communism and independence in the past. Today it is Iraq, Syria, Afghanistan, Yemen. The fear is extremism, even that extremist who were once ‘friends ‘are now threats to frighten the mighty.  For the innocent the tragedy is horrible, for the great men, the heroes in uniform, the voting tax payers and the media bobbleheads the wars are new, exciting and about more than just death. Vietnam, was a mistake, it should be forgotten. Except for the heroes who went and fought, they should be heralded.  The Asian victims, faceless, bleeding mannequins to be ignored.

For those who do not want to forget, those who seek history and what truths may come books like this are important.  It is a quick read, it is for the United States by one of its children elites, but it tells much even though little has been learned. So on go the rhythmic repetitions of histories war drums. That is the bitter heritage that we all must suffer.