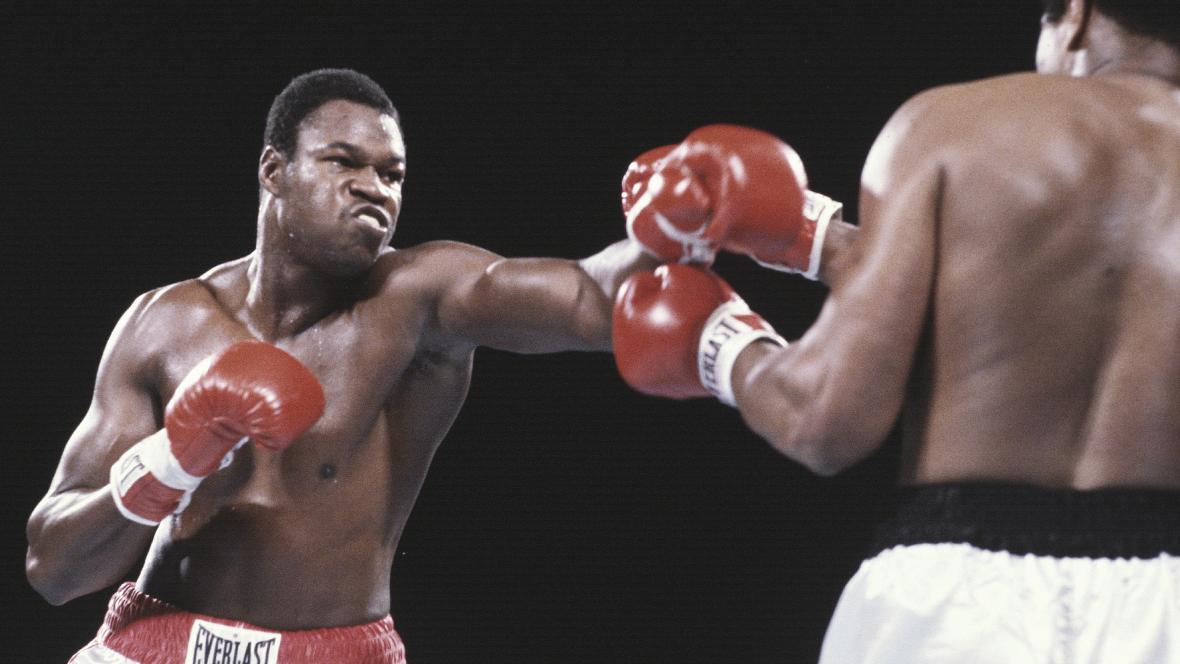 Had the most consistent jab through his career. It could be hard and fast, as well as stiff and long. Often for much of a round he would only throw the jab, and still manage to dominate his opponent. Holmes mastered the aggressive jab while also possessing a defensive lead had that allowed him to stave off danger when he was facing power punchers.  Even at 52 years of age, it was enough to defeat younger men. A student of Muhammad Ali and while he did show aspects of the great man’s talents he was very much his own fighter, especially in throwing the jab.

With his long reach and powerful shoulders, Liston was able to bludgeon his opponents with each hand. In his era he was a man to be feared and much of this fear was thanks to his ability to impact with the jab, often described as being hit with a pole many of Liston’s foes seemed as though they had been.

One of the best fighters to ever have laced on gloves, Louis is also considered by many to be one of the most technically perfect fighters in the heavyweight division.  Often his jab was more of a punch than a pawing action as was common from many of the other fighters in his time. If Liston’s jab felt like a pole, it was said that Louis’ jab was like being hit with a broken bottle being jammed into your face.

The Greatest of All Time, Ali by default should be at the top of any list. But despite his blinding speed, ability to recover and stubbornness Ali did not throw anything that could be considered ‘perfect’.  His jab was constant and at times a back fist or a flicking action but it was a factor in his fights that would wear a man down, bleed them out or set them up for one of many accurate and well-placed shots.

One needs to consider that there exists two version of Foreman. The brooding understudy of Liston who destroyed his foes, including the great Ken Norton and Joe Frazier, who would go on to face Ali famously in the jungles of Zaire. That Foreman had a hard and powerful jab.  The second career of Foreman saw a more versatile fighter, one that could hit hard with a battering ram of a left or at times one who could throw it with speed and accuracy allowing him to set up a knee bending right cross.

Lewis managed to win a few fights by throwing nearly the jab alone. At times, he would jab and grab and negate his opponents offence by either stabbing them at range with his lead left or smothering them with a frustrating clinch.  It was not attractive, it was effective.  Lewis also could hit hard and his jab, especially once he managed to solve his footwork out in his later career was a real offensive weapon.

The most accomplished inside the ring of the Klitschko brothers, both possessed great power and a lead hand.  It was WK who displayed not only a more consistent tool but also one that was versatile enough to allow the giant fighter to left hook and up punch from with balance and consistency.

One of the alphabet champions from the lost generation of heavyweights but for a brief period during the early 1980s, Thomas had a jab that many claimed to be the sports best.  Long and straight it was as accurate as a lazer and helped to win Mr Pink many of his early bouts. In his later career as he wavered it was not enough to keep at bay the better fighters, though sometimes it was enough to trouble them.

The unusual and controversial Polish fighter had a career that defies fiction. Both inside the ropes and outside he was a figure of drama.  When he was at his best inside the ring he had one nasty jab that could be both brutal and nullifying. In his two fights against Riddick Bowe it was thanks to Golota’s jab that he could control the former champion.  Into his later career Golota still displayed the dominant jab and though his legacy shall be stained, his opponents no doubt will never forget his punches.

Buster Douglas will forever be associated with his one night in Tokyo, when he defeated the bad boy of boxing Iron Mike Tyson. As a massive underdog, he used his jab with majestic perfection against the power punching menace. Douglas had been an inconsistent fighter before the Tyson bout, more so afterwards.  It was when he used the jab and set up his other punches from it that Douglas was in command and usually on his way to victory.

There are more modern fighters who had a better jab and were more technically skilled than the big Italian fighter of the 1930s, but Carnera had a long and effective jab in his time. It was telling in his fights and he could out point and bring down his opponents.  It was not a pretty punch but it was there and that was enough.