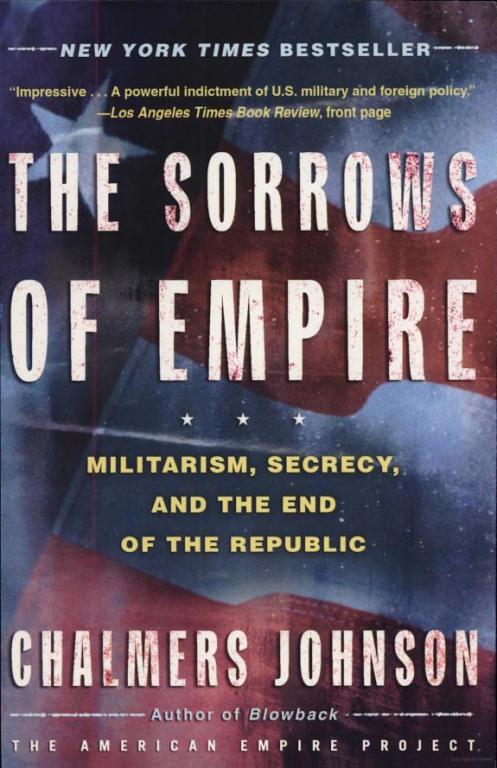 Sorrows of Empire, Militarism, Secrecy and the end of the Republic by Chalmers Johnson book review

The second installment in Chalmer Johnson’s trilogy of book. A book where Johnson pulls no punches as he delves into the history of US imperialism.  The theme of Johnson’s writings is to indulge the reader into the uncomfortable realities and histories of a supposed liberty minded republic and its hegemonic intentions upon the wider world.  Though no Manifest Destiny has been declared outright, it is assumed that most regions and events in the world belong in the domain of the United States.  Johnson like many other writers, most with a left tilting pen, exhibit histories distant and recent that depict this gruesome reality. Though despite many such good books on the subject and an excessive of evidence the mainstream continues to seem oblivious, whether the ignorance is an omission of choice or one of religious adherence to nationalism. Regardless outside the voting borders of the USA a wider world exists that watches and is not seduced by the prose of founding fathers or freedom dense speeches performed by the many elected executives whose regimes each oversaw mass murder, invasions and economic meddling’s far and wide. War and empire as Chalmers show in this book is a constant in US history. The intended readers are Americans but this is what the America that they do not wish to see is known for by the rest of us.

Written in 2003 it was a book fresh in the genesis of the modern American military age, the period known as the ‘War on Terror’.  After the 2001 attacks on the US, where a known terror group through intrigue, menace and planning managed to murder thousands of US citizens resulting in a new period of self-righteous endless war, not for just the USA but its allies and proxies.  Johnson warns of the widening implications of such a crusaders vengeance. He even suggests that it was likely that the US would have invaded Afghanistan regardless Bin Laden’s presence there after the 2001 attacks. In his 1998 book ‘Blowback’ his prediction was that an attack would come from East Asia out of a response to US foreign policy in that region, regardless an attack did come. Just this one was from the greater Middle East.  Just like East Asia those in Central and the Middle East have suffered directly and over time indirectly thanks to the many policies and aggressions by the United States. For many who do not remember the past five years it would be hard to expect them to have taken note of the 1990s, let alone decades before.  Johnson wants you and them to know, not siding or sympathising with any agents of vengeance he simply illustrates the factual actions conducted by a government unchecked as a restless superpower full of hubris and supported by many of its tax paying voters in the belief that the world is its buffer zone.  A buffer zone it turns out from its own consequences.

Having survived a stand off between the Soviet Union with a cold war full of hot moments and interventions and hand shakes with dictators known only as being righteous for their anti-communist posturing the United States looked to new threats and investments in military justification. Iraq in 1990 was an adequate villain commencing as in its pariah status, a former ally, did so as it threatened the security of the dictatorships of Saudi Arabia and the Gulf States.  Johnson spends time on this era and period as it is relevant to when the book was written and unlike now, should have still been fresh on many minds. Even the lazy observer. In 2003 such a book would have been a coherent dissenting read unlike many of the contrarian partisan garble produced simply because they were anti-Bush, then again so close to the attacks most were red white and blue all the way to Baghdad. Johnson does not write with any partisan limitations. His interest is in revealing foreign policy facts, not omitting those performed under his preferred regimes tenure.

Johnson at points reads like Chomsky for better an worse in that Johnson knows much but lacks a consistent focus. The energy and passion of his mind and his ability to contain knowledge fall into the pages yet never once does a place or period get enough information, it is all very introductory and most importantly a place for one to scratch. This is likely a reflection of the expansive nature of the history of the US empire. So for those seeking one, it is a concise and compact read, an overlay.  Those yearning more it is a repeat of knowns while also being an inspiration for investigation.  Unlike many other books of a similar nature it does not read like a compilation of articles or essays, even if by the same author. It is very much a book that fits well together.

Using the easy to handle comparisons between the Roman Republic to when it became an Empire, it is a contrast of similarities that is not uncommon but is simplistic. Johnson uses it at times as a theme though it is not needed.  The United States is not as exceptional as its many devoted champions believe it to be but at the same time it is it’s very own historical and present anomaly of power and moments. As others in the past and more recent times have done with the US and other modern empires the Roman analogy is clunky.  But perhaps this helps it to become a more ready to digest congestion of facts if others can use their basic knowledge of ancient Rome to overlay on modern United States, then ‘Rubicon’ and Latin expressions can edge their way as credible expressions and descriptions. Just as modern politics fixes ‘gate to the end of each trending event, so to do many historians use Roman history as a pronouncement for the now. For Johnson it feels unnecessary.

Like with his prior books Johnson dedicates the closing chapters to economics and his interpretations of the morality of certain economic principles. Though he spends so much time on centrally planned mayhem in the guise of militarism and interventions he then condemns ‘free markets’ or at least the rhetorical promise of them.  As he does illustrate the mercantilist protectionism of the US and British Empires had very little free markets in practice, yet he still attaches them to globalisation and lassie faire capitalism. He condemns the free market without having given it any examples of practical implementation.  It is here that the book reads with an anti-capitalist tome, which is relevant for the subject of exploitation yet so too would the command economy that helps to fund the military and constrains the populaces of the domestic and foreign people subjugated to rule.  Johnson is right to point out however that while some are expected to suffer sanctions and their own economic devices, others are endowed with subsidies, loans, incentives, protectionism and a mixed economy of much debt marred with some form of free markets in specific sectors all the while the US proclaims its vision of economic philosophy is the best. Though despite proclamations and contrast to communism never in actual reality has the confidence of faith in such freedom to practice itself or for its allies.  This is not so much a critic of a free market never allowed to exist but in those who pretend to obey an Adam Smith, let alone a Hayek while instead looking towards Keynes, Mussolini and Friedman all converged in a mutant expression of American economic exceptionalism. Regardless it is a strong book and as always Johnson delivers his blows well.