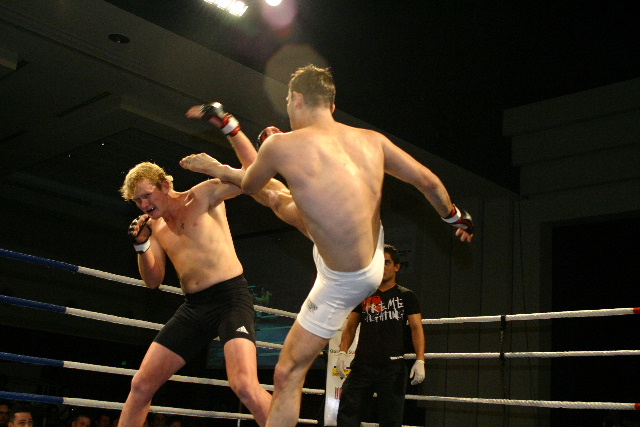 I often find it interesting as well as some what irritating that so many people seek to pretend to be a prize fighter.  They will adopt some living avatar incorporating all of the tid bits that they have observed from the media and perhaps in real life, they do this as a means of social and general currency.  Whether this makes them feel more secure in their day to day lives or gives them a false set of confidence I am uncertain. But what ever the reason these guys give us real fighters a bad image.

It is a peculiar thing that seems most often reserved for the combat sports, the more in vogue a sport is and the more guys it has walking about professing to be a competitor in it.  I have often come across such people whether they tell me directly that they are a ‘fighter’ because they are in training or because they had some obscure sparring match some where once and this should be considered a ‘pro fight’. And it is then should they dip their toes into the shark tank of a fight gym away from the ego feeding posts of social media and the drunken declarations at a night club, they perform all the more poorly than what their boasts at first advertised.

This is in no way an aggressive condemnation of such people nor is it really a written slap down to them it is how ever a tired shake of the head.  In so much that I know personally how hard it is to get to any levels of regular athletic competition, how hard it is to continuously ply it, to suffer the pains of injury, to walk the corridors of doubt, to look past the cheering crowds and to see the ugly emptiness of either victory or defeat.  And it is with such ignorant and arrogant disregard that they wipe over all of this with their dilution of the sacrifice and risk, all for the self service of their own egos.  All because they wish to big note themselves among some local faces all because they want to get laid all because…they are cowards.

In one incidence I was shopping one afternoon and had the pleasure of listening to some young lads hold a conversation about one of them having an approaching ‘Cage fight’. No doubt a music festival was coming up and having just left the local 24 hr gym they were now bloated and pulsing with what ever course had helped them inflate their show muscles, so their deluded self worth was very high.   One of the guys said to his friends that his strength training that his PT mate (apparently combat sport coaching is a two week course of certified bull shit these days) had him doing was going to improve his ‘ground and pound’ so much so that he was unsure if he could ‘legally fight.’

I just walked past them my ears both throbbing from the caulis that were reopened from the previous nights training (something that none of them would ever hope to know how painful it is to suffer) and because an aerial turd sandwich whisked by.  The thing that got me the most though was just how easily the others believed the toy ‘fighter’.  He was so secure in his platform of self serving bunk that he knew no one was going to knock him down from it.  Now I know that if I was with some one who had more of a hair trigger (ie my brother) then this guy would have been on the floor with his jaw liquidised.  But alas it did not illicit such a response from me. Just a need to vomit a little stirred my insides.

This punk was just one in many that uses the hard work and talents of others to help promote a self delusion-illusion of themselves.  Past all of the cosmetic lifting that they do, the generic tattoos and the lies to women that they pull to ‘get some.’  In the end they are scared.  They are scared of the truths and realities that one finds inside of that arena.  Not just the actual cage itself but the process one goes into getting there.

To those who say to me that they want to be a fighter.  Please do not tell me. Walk it day to day. Show me it.  No matter how loud your proclamations of future glories may be, it is in your silent effort that leads to this that I am interested in. It is not the clever slander that you throw around about those who are doing, but it is in the litres of sweat that fall with humble exertion that takes you far.  And most of all it is not the creation of a persona that you think matters.  It is simply what you do and have done that does.

Being a fighter especially by profession is not something you hold on to as a sword to wield aggressively at a social occasion, it is not something you have as a trump card to intimidate others and it most certainly is not something that you profess well before the fact.  I would never pretend to be an Olympic swimmer just because I like to splash at waves in the beach waters, I would be deluding myself that, the realities of a competitive pool and wading in knee high sea water were much the same.   Just as is the difference between fighting an elite competition differs from play fighting with your mates or getting into a drunken burst of violence at what ever watering hole you may happen to pollute.  One does not make the other.

I suspect this goes for all things in life.  And I suspect that these sorts lurk in every part of the World both here and and in great distant pasts.  You will always have Beta males attempting to poorly imitate the Alpha’s so much so that they deceive all others in their appearance and their mating calls.  But it is when the challenge is thrown up. It is when the drums of battle begin and stop that it matters.  That is when the toys are put down and the weapons of war come out.

Being a fighter is not about looking a part or even acting it. It is about working hard to that means. It is about being CONSISTENT and learning your craft with honest intent.  Some of the most violent and dangerous men that I have ever come across wear the most sincere smile, they dress to blend in, not to stand out. They know nothing about acting tough and its fashions, they simply know what it is like to be tough and to get through tough situations.  A peacock may be proud of how it looks and rely solely on its looks, high above soars an eagle or owl watching unimpressed with talons that will tear feather and flesh to shreds with ease. Though no doubt saying what I have here in this blog may have rustled some feathers.   So please do not try to walk a path because it is fashionable but do so because it is who you are, it is what you are.

And most importantly, this does not go for all but I should hope that it does for most.  When you do attain what ever it is you are looking for in your training, what ever you learn from the process and who ever you find in yourself when you enter that arena.  Please should you return again and again conduct yourself with honour and principle.  It is a far greater legacy than what you should ever hope to leave inside any ring or cage.  Though to those who I mentioned above in this rambling I suspect such words do not exist.

So this rant like blog is not so much an ‘I am’ as opposed to merely stating to those out there who can read and who are on the cusp of interest in entering this sport.  The best advice I can give to you is this.  Don’t say it. Simply do it.  This was in no way directed into the direction of any one, but is more meant as a general observation.  It is also an opinion of one who has DONE to those who have not. And rest assured my opinion is for the most part, from what I have ascertained, shared by those others that have Done about those who have not or who have perhaps yet to.

Train smart and be well.