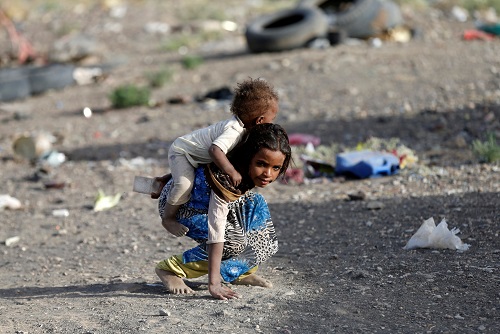 The darkness was permanent, even during the daylight hours it was grim. Smoke, fire, drones, death all blocked the sun. The smiles were brave but behind them lay hungry mouths and empty stomachs. Parents watched their children with a distance that only a loving helplessness knew. They could hold them, kiss them, wipe away the tears but they could not make the lights go on, could not fill their stomachs.  They could not end the killing.

Outside the darkness, beyond the grey of helplessness glows a light of enlightened arrogance. A brilliant bulb that consumes with its ever reach, like a sun of magnificence it can nurture instead it kills.  It casts shadows, tears love from every moment, shreds dignity from any pride. It is the mandate of the civilized. Those outside of its borders in the frontiers of peasantry and barbarity, they must suffer. It is policy.

Local master’s rule with shrill recklessness, born from golden eggs or the strong men who seized power upon waves of revolutionary energy. They now stand in pools of local blood, enemies whether real or invented die, are tortured, raped and lost to the prisons of power.  Their real enemy is the great empire, the distant master of the Earth.  Not a God but with a god’s power it can take and destroy, jealous, greedy and vengeful its testament is an ancient hubris that commands the latest technologies wielded by professionals with endless resources.

The peasant, the impoverished, the ruled they wish for no master, but it is the distant killer that hurts them most.  The picket line of warships, the blockade of fighter jets, the swarms of drones that snatch life and strangle without mercy they all do so for the starving strangers own good. So, they lie. If only the meek could rise, with emaciated limbs clench their fists and with rusty rifles storm the Bastille. They cannot and even if they did then what?

It would be with the dictates from a distant master that the new rulers should abide. Those dying, the dead, the unburied who would avenge them? What champion stands above the crying rags of the desperate? The great nations of the civilized and their proxy killers really could not care, it is not their concern and yet they are so involved, so intricate in the misery.

While those inside the civilized march for social justice, their obese bodies cry in anxiety trembling voices they speak nothing of their nations victims.  Those beyond the frontier witness through the same technologies and mediums the concerns and lusts of those who have it all. Yet from within the empire few speak about the anguish, the pain, the shame. Instead the civilized look into a mirror of neurotic imperfection celebrating in their own endless glory.  No matter how much murder, depression, suffering the elites and their supporters are never in doubt, never questioned.

The civilized have faith, it differs from those who are desperate. For the flabby in the light of modernity they celebrate the rituals of elections and worship in their governance. They cheer for it to provide, to take and to command. Those beyond look to the heavens to a God that has been absent for centuries. Though they pray and beg, with noble patience that often simmers into a boiling rage.  Terrorists do not come from Hell but from man’s own policies.

It is with God’s blessing that all seem to boast righteousness, whether it is in the pursuit of hedonism, to conquer strangers in distant territories, to snatch life with instantaneous vulgarity or for patriotic pride. The hungry, the sick, the thirsty they never seem to have enough prayers for a God who is supposed to be concerned with the material majesty of the civilized. God is too busy winning Oscars and sports trophies for the wealthy inside the empire to care about the milk less breasts of a mother who cries dry tears.

If only the dirty and unwashed would heed to the supremacy of a civilized system of law and government. Despite histories of self rule and independent distinction. The modern era is defined by the educated foreigner who needs to heal, who brings a gospel of control, who brings armed check points and mandates. Market places that are regulated and elections that do not reflect the number of ink stained thumbs are progress it is claimed. Instead the term democracy, Christianity, freedom, liberty and so on really mean hunger, death and dictators. The missionaries now wear camo.

The language is meaningless when the actions are everything. Those beyond the frontiers do not have the luxury of choice, no supermarkets, streaming services or bustling districts to visit upon with frequent joy. Their perspective is defined by what they are allowed, whether by the local war lords, the civilized empires beyond their waters or what aid workers can bring in. The black markets bustle when they can but with little wealth the starving only has their weak bodies to sell and some do.

It is for them to decide apparently. Celebrity flab concealed inside tailored suits surrounded by armies of armed professionals and bureaucratic tinkerers beat their chests, wave their swords and send gunboats. But it is always them going to the lands of the poor, it is always them entering the homes of the starving. There is no more bread to take, no more wine to steal. The Earth is shrinking, you have all but won.  It chokes from the wars, it bleeds from the exploitation. The cancer of foreign policy consumes the planet.

Another election cycle for the civilized looms. The talking points lack concern for the hungry, like the Biafrans or Ethiopians they are lost souls that a photographer may capture for a prize. Their eyes absent as the camera bulb flickers into the darkness. Will history be kind to an empire, a culture that swallows so much up with little regard?  Who remembers the bombs that litter Laos and Cambodia but the poor and mutilated? The future will forget the desperate of now just as easily. Yemen, Syria, Libya they are not broken nations but millions of individual human beings.

The names on the map, the different flags only separates but love, art, food, friendship, trade all of these unite. A baby sobs regardless of the crying national anthem, love transcends the borders of nation, friendship glows when policy segregates. The murder and torture does not protect, it endangers. Indifference does not strengthen, it empowers the worst in humanity and strangles the innocent.

The civilized empires God claims that the meek shall inherit the Earth. Perhaps this is so, as they fill it with their bones inside of unmarked graves as the land above is destroyed by arrogant. There is nothing romantic in starving the desperate, no crusade in murdering the weak, no glory in snuffing babies. But sometimes the powerful kick over ant hills regardless.