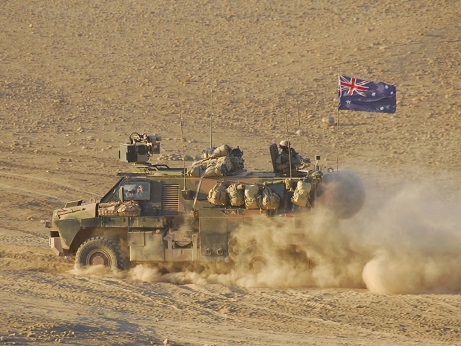 He enlisted soon after the 2001 attacks on the United States. He felt a sense of duty to get into the fight, though it was an attack on the United States, it also seemed like it was an attack on all of us. Even for an Australian, it seemed like The West, freedom, the good guys all were suddenly under threat.  In his mind the Yanks were friends, we had a history of fighting alongside them and now it was his time to do his part and help a mate out. Even if that mate was the biggest military in human history.

He became an infantry man, in his middle twenties he soon found himself deployed overseas. He did not know where Afghanistan was until the war on terror, he really wanted to go to Iraq. He was old enough to remember that Saddam Hussein was evil, a tyrant, a Middle Eastern Hitler.  He remembered all of that from his childhood. During the first war against Iraq.  Now however those responsible were inside Afghanistan.

It was an isolated frontier, even in the cities it seemed alien. Unfamiliar and distant. He smiled and greeted the people though he distrusted them, he still felt heroic inside of his uniform as he passed them by.  On the outskirts of the city he found himself coming across different people, poor and indifferent to his educated confidence.  The Afghanistan government he and his brothers felt a distrust for, wary of their soldiers. Reports of Afghani soldiers killing friendlies roamed his mind every time he saw one.  They were allies.

The only friends outside of his fellow Aussies that he trusted were those from the US or NATO.  He felt relief when he saw an American helicopter overhead, heard a British accent or even saw a German in combat gear.  He assumed every farmer to be Taliban, each teenager an Al Qaeda. All them worshiped an angry God that craved war. He knew this, it was ingrained in him since the twin towers in New York had come down. Before that moment he had never heard of Islam.  Now he felt he was an expert.

His unit was sent further into the barren hinterland, distant mountains and dirt farmland. Beyond that scattered hovels that seemed more primitive than the pioneer tourist attractions back home in rural Australia. The days were long and boring, frightful.  He was a professional and trusted in his training and teammates.  The highlight was in supporting the SAS, national super men who carried themselves with expert confidence. He felt important when he was in their presence.

They made contact but the enemy evaporated back into the distance of the countryside, the crack and hiss followed by adrenaline and the feeling of dust and dirt against the body, rifle against the shoulder and pressed into the cheek. Brief communication among the teammates as the incoming is located.  Movement is hard to see in the heat; a farmer may suddenly walk by indifferent to the life and death exchange.  Perhaps he knew more than it seemed.

On one patrol an RPG exploded nearby, dust and dirt splashed skywards, they ducked and hid returning fire only to hear distant laughter and jeering.  That was the enemy. They never seemed to stick around and fight.  They harassed and took life.  They were brutal and savage, their horrible methods could be found as they patrolled into other people’s homes finding those who were stuck between the coalition and Taliban.

One night they went out deep, the information was solid. They were expected to contact with the enemy.  He felt the nerves and the cold wariness of life and death, beyond the darkness was an unknown anticipation that only war fighters understood.  They were hunting the enemy.  Ahead in the cloudless night he could see the distinct shape of a farmhouse, carefully he and his mates circled it. It was for him and a few others to enter, while the others waited ready on the outside.

It did not take much to break down the door, he rushed inside.  The sudden intrusion had alerted an occupant, the beams of torchlight flashed across the room.  An elderly man holding a kitchen knife rushed towards him, yelling at him in a cursed language.  They grappled, it was an intimate exchange, he was young and fit despite his kit. The old man in shock was deranged.  Reversing the old mans tackle, he reached for something to hit the old man with. Nearby was a pile of roofing tiles.  He seized one and bashed the man repeatedly. His face collapsed easily as the tiles shattered.

The adrenaline pulsed through his body, his brothers on edge cleared the house finding an old woman and young child inside a small room.  They ripped them from their hiding place.  They both began to cry loudly as they walked over the bloody body of the old man.  He watched them in their grief, his mates laughed at the sorry sight of the dead man, whose head had imploded. He rubbed the brain matter and blood onto his pants, it felt warm and sticky.

As the sun rose, they left the house. He was embraced by his teammates, his back patted. He had killed a Taliban. Why else would a man who had never heard of Australia, rushed at an armed intruder deep in the middle of the night? The reasoning was sound. The old man was an armed insurgent and so it should be confirmed afterwards. It was a lawful kill.

The incident hardened him. Death and the brutal injuries of war were everywhere they visited. Air strikes from helicopter, drone or jet.  Artillery, mines and machine guns. All tore flesh and bone with ease. The remainder of the time felt grey. As though a plate of cold indifference had washed across him. It was war, his job was to kill.  The nightmares would come later.

He walked past a crying boy, mud and flies stuck to his tears.  His family had been killed, their bodies were already rotting.  He watched as the boy was taken away by a medic. He and his teammates said nothing, an airstrike had blown the boys house to pieces, the child surviving.  It was war. It happens. He went back to his cot that night and watched a DVD.

Once he returned to Australia, he like others tried to make sense of the war and his experiences.  It was different while inside the suburban comfort of Australia, family and friends called him a hero. But beer tasted flat, he could only sleep with the help of tablets and marijuana.  He considered staying on to help finish the job over there but his Mother’s concerns kept him home.

Those who knew what he did over there boasted on his behalf about the night he killed a Taliban with his bare hands. He let them, cheering on their exaggerations. But in his moments of solitude he recalls the woman and child as the old man’s body bled dry.  He took that life. He spoke with a friend, another ex soldier who had seen as much death as him. Both asked what they could do next? Where would they find work now after all that they had done was behind them.

The nightmares, the thoughts of suicide. The doubts, the questions all could be suppressed with counseling, drugs and booze. Him and his mate considered what was next for them. He thought about eating enough pills to sleep forever, what it would be like to get drunk enough to drown when he went for a swim or if he could swallow the barrel of a gun.

His friend and him drank a lot, they hid inside of computer games and then they both joined the police force.  They were welcomed and found a familiarity in the training and uniform. It was another home, another team. The drinking, broken relationships continued. Sometimes the worse nightmares that one can have are memories.

The nights were broken and the days grey. Sometimes he would park his police fleet car and stare into a wall, he knew what his side arm tasted like. He often had it with the salt of his tears. He kept doing the job and finding a reason to go on. But some day he knows that the trigger will feel lighter against his finger, the barrel softer on his teeth. He would still be a hero, just with no more nightmares.