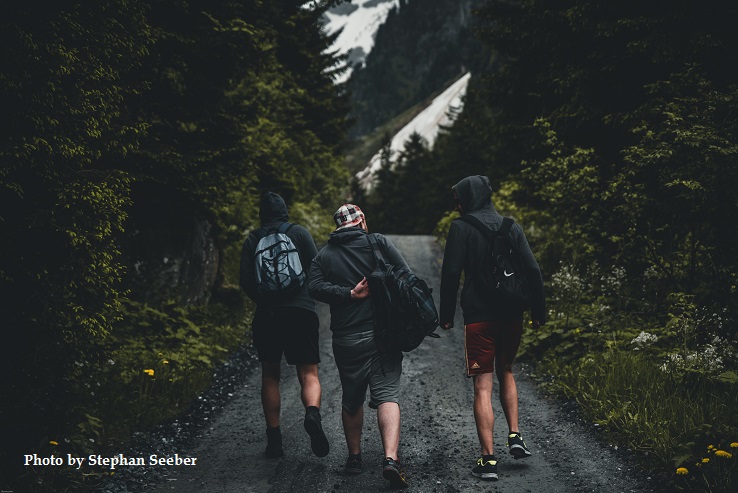 There were three friends, each were a little different to the other.  As young boys the three began to mature into different people, John was lazy he grew rounder as the others began to grow broad shoulders.  While they played sport he would watch and criticize the other players.  John loved his friends but he really was not as interested in participating in any of the harder activities like they were.

David was smart, he was cunning and always interested in schemes and scenarios that benefited himself. He loved to play tricks on the others, but they still loved him for it. Though he liked to run about, it was team sports that he preferred. He enjoyed in sharing in the glory with his teammates.  He found that there was great benefit to him in riding on the collective wave of others. Afterall he was part of the team and did them win. Whenever they lost, it was other players who were to blame. John tended to agree but their other friend Frank would often take the losses to heart and learn from them.

Frank always worked hard, he helped his parents with their business and liked to volunteer as a young man with local charities. Besides working for his parents Frank stacked shelves at a local supermarket after school. He would often shout the movies and sweets for his friend John who claimed that he was never paid for chores at home, not that anyone saw him do any, and that he had too many conditions that would inhibit him from getting a job.  David also stacked shelves but he was more interested in finding easier jobs.

As the boys grew into men, they soon parted ways but often kept in touch. John stayed at home. He enjoyed the treats of life and found that he could live comfortably at first as a student and then as someone who received benefits as an unemployed person. He would go onto social media and moan about how hard life was and would criticize those who were successful and wealthy. He had elevated opinions but very little experience outside of the computer screen.

David went to university and studied; he was proud of his accomplishments he was able to find a job for a company that had secure government contracts. He enjoyed the perks and knew how to navigate the world that he now lived in. His family was proud of him and he soon found a likeminded partner where they both took a loan for their first house.

Frank continued to help his family; he was able to steer their business from being mediocre to successful. His energy and innovation helped to build the company.  He also had some side businesses as he was never comfortable with one income, he would pull up weeds, mow lawns then with the rocks he found he would clean them and paint them, making extra money when they sold. In his spare time, he would coach local sports.  He was energetic and helped many others.

As the three friends matured into their thirties the toils of their life soon began to wrap around their worlds.  John eventually left home, but because he struggled to learn new things and never really wanted to work, he was able to live in public housing where he was paid a pension. He spent the money on toys, computer games and junk food. Occasionally he would gamble on the side but he otherwise kept his nose clean and never committed a crime. He often felt like a victim because unlike his friends he was not considered a success, and this would at times make him feel depressed. Though they loved him and always supported him, he sometimes resented them. John was told by his new group of friends that he should despise his old friends for their successes. Even though Frank would buy John expensive presents, pay for his holidays and even bought him car, John was still unhappy with his friend Franks business success.

David had risen to the ranks of the company that he was in, he had made contacts and managed to sell his first house and move to a bigger and better one. He was envious of the business success that his friend Frank had.  So, David began to use his contacts and decided that he would go into business for himself. He had many ideas and was confident that he could succeed.  He was able to get the paperwork done and even secured hefty grants from the government to help set up his businesses along with a loan from the bank.  He slowly found that business was hard and that when you must work for yourself it can be hard and unrewarding. When the grant and loan money ran out David learned that his business was not successful. Frank offered to help, David took the offer and used Frank’s money but even still in time his poor management ensured that he still had to close the business. Fortunately for David through his contacts he found a secure government job as a manager.

Frank told David not to worry about the loan. David was embarrassed and annoyed but soon forgot that he had ever borrowed the money in the first place. He soon told others that his business was very successful until others had conspired to ruin him.

Frank was enjoying life, he seemed youthful and energetic, he was helpful and thorough. He cared about his friends but found that he was unable to help them and when he tried, they seemed to resent him.  Frank ran a very successful business that employed a lot of people. He would sometimes give money to those employees who would come to him in need, he would donate to charity and still liked to volunteer with aid work and as a sports coach. He even had found that his painted rocks were doing very well online, he no longer had the time to sell them at the local markets. And instead had listed them on the internet where he would no longer get paid in cash but through digital means. He was happy with the fruits of his work and even proud that his silly rocks were selling so well because he used that money for charity and to help his friends out. Plus he enjoyed painting his rocks the most of all his enterprises.

One day Frank was contacted by the tax office.  He had been reported because he was earning too much money. Though he had paid a lot of personal income tax, business tax and was honest and accurate with his accounting.  His side business of rock painting had taken off to fast and was too successful.  He had put the money into charities and given most of it away so he never considered it a real income and because he thought that by finding rocks in his back yard or in his paddocks, then painting them with paint that he had bought he was doing no harm. He soon found out that he was.  He was evading tax.

Because Frank had been doing this for so long, he was audited and then everything he had ever done came into question.  He was made to account for every little piece of income he had ever made. The money that Frank had lent out and given to his friends was now working against him. Everything he had ever done financially was queried.  Frank was forced to close his business, sell his house and pay the government a lot of money.  He felt sad and many of his peers called him a tax cheat, even the local newspaper which had months earlier heralded him for his charity work now called him a greedy tax evader. Frank was a criminal. In the eyes of many, the worse kind. He had not paid his fair share.

Frank rented a unit and worked two jobs, he started to paint his rocks again on the side, he made sure to sell them at the local markets where he could not earn too much from them.  His friends David and John would come and visit him. He was happy to see them and glad that they were doing well for themselves.  Frank despite being called a criminal and losing everything slowly rebuilt himself. He was wiser now. He decided that he would not be too successful or hire anyone ever again. Though he was comfortable he was never as wealthy as he once was, he was too honest to take money from the government and he preferred to work for himself. He wanted customers and not an employer to be his custodian.

John was able to remain on welfare; he kept his nose clean and did all that was legally required of him to continue to receive his benefits. He was after all entitled to them.  HIs friends would support him and include them in what he would do, he was still depressed and sad that he was not successful but he had decided long ago that no opportunities existed for him so all he could do was make do with the pension that he received. It was not his fault after al that he was unable to work and make a lot of money.

David had become very successful in the government department that he worked for. He was the go-to man when it came to small business. He soon became a head of business coordination and even was considered an expert on the field. He would help to implement rules and regulations that governed the local business and even helped many to get grants and made sure that they obeyed the many regulations that he had helped to put in place.  David was never tempted to go into business for himself again. He had a large pension waiting for him, holiday, sick pay and benefits that many could not imagine.  He did not need to work for himself, his business was in regulating and controlling other peoples business now.

Frank remained happy for his friends.  He kept working and with honesty he built himself up but wherever he went someone would bring up the fact that he was caught evading tax.  He was forever labelled a criminal.  He could not escape that.  He accepted that it was to be his brand. Even though he was called this by many, he felt in his heart of hearts that he was the most honest and principled of his friends. But he and they each knew, that did not matter.