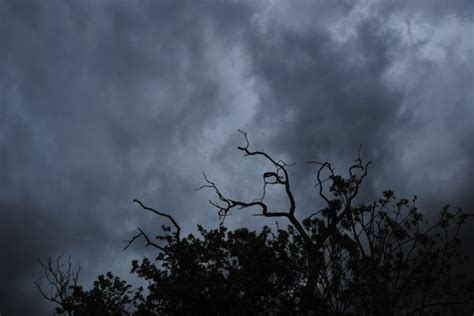 What comes in the night

The wind pushed against her house, leaves rustled over the fence and the doors buffeted into their hinges. She was not scared, she was inside. The cold crept, it was persistent crawling from the tiles as it reached her bed, she could feel it penetrate her blankets. She was wrapped up, guarded from the chill.  The rain began to slap and then pelt heavily onto her roof, she could feel the house tremble.  She was dry, inside and away from the curse of nature.

Slowly she felt her eyes lower, they collapsed onto themselves as sleep took her. It was warm, comforting and despite the rain, gentle. The storm eased, the wind lowered and the cold soothed away. Her eyes opened; the middle morning called her to the bathroom. Carefully she navigated the shadows and passed the familiar shapes of her house.  Writhing objects and glistening forms watched her as she passed them with little regard.

She soon returned to her bed, safe and inside again.  Outside her room, beyond the doorway crawled unfamiliar shapes. Shadows moved along her walls despite the motionless light from outside. She curled her toes, feeling the blankets wrap her tight. The cold crept across the bed and as the wavering creeps of the night visited her house, she closed her eyes welcoming a return to sleep.

Eventually the warmth that encased her carried her back to sleep. Beyond her bed and her ease, the shadows crawled and convened. They scoured and investigated, exploring her home. The darkness hid them from her mind and they slowly devoured any warmth not yet taken by the night.  Beyond her house, high above clouds conspired to swallow the moon. Dark and heavy they began to spit rain below.

Cold wetness reached for her, a tendril of unfamiliar seized her ankle. She jarred away and pulled upwards, awake she looked for what had disrupted her sleep.  Turning to her lamp, she slapped it the shadows vanished into the corners and behind her wardrobe as the light chased them away. She scanned and searched for the something in her room.  Nothing, only the familiar. Beyond that the storm and rain. She was still safe, because she was inside, she reminded herself.

Slowly she turned the light off and climbed back to her comfort, wary and unsettled she reasoned that it was just a dream.  As her chest lightened and her mind settled, she closed her eyes and welcomed sleep, The wet, the cold slowly returned. Delicately it slid and climbed beneath her sheets until it reached her hips, seizing her waist it pulled at her, she screamed and opened her eyes. The darkness was moving, violent and sudden it matched the storm outside. She slammed her hand against the lamp, the light returned and the wet cold evaporated.  She stood, searching her room with clenched fists.  She saw only the familiar of her room.

She could her wrapping and squirming from beyond, the darkness hid the shapes that she could hear moving. She grabbed a stick, slight and frail it secured her mind as she held it tight. Slowly she left her room, watching the shadows as they wobbled away.  Flicking the light switch, they disappeared outside back into the darkness as the cold rain washed over her house.  Carefully she continued to search her home, frightened and wary she stepped with care.  The thunder jarred and now lightning washed over her but she was determined to clear her house before she could settle her mind.

The shadows, the wandering cold, the unfamiliar shapes they eroded as she neared.  The lights of her house now all completely on, the darkness that lurked from beyond hid as she neared.  She could not see outside, only when the lighting came.  It was then that the shadows held form.  She backed away from her windows and waited for the lightning, when it returned, she saw them again. The unfamiliar shapes of the storm.

The fury from nature rocked her home and suddenly her lights darkened. The power gone. Her stick in her hands she walked through the house, wary of any object as she returned to her room.  She was inside, she safe she reminded herself her stick at hand.  The front door was locked. The back door too. She watched and waited as the lighting lit everything up for a moment. Those shapes that moved in the dark were gone.  Reason grasped for a foothold but the instincts to run pushed it away. She walked back to her room, behind her the shadows returned.

She slammed her bedroom door, pressing her body against it. The shadows beyond thumped into it.  She could feel the cold, the wind, the storm pushing against her bedroom door.  Her heart pounded; her muscles tightened. She braced against the door; the thin wood was all the secured her from beyond.  Beneath the door, gently it pried, the unfamiliar wetness licked at her feet. She leaped and clawed away. The door flew open, the shadows whirled. Inside the flickering bright of the lightning, she saw with fright the shape.  She could not unsee it. She ran screaming, passing its mass. She threw her stick; it was not enough for what she saw.

Struggling with her front door, she pushed it open. Running into the storm, the cold rain splashing shock into her fright.  Behind her inside her house the shadows, the shape and unfamiliar laughed and mocked. She was safe now, outside.  The storm persisted the howling of nature and the unnatural composed a music of fright. She watched, she listened and remained still in the rain and cold but now she was safe outside in the night.