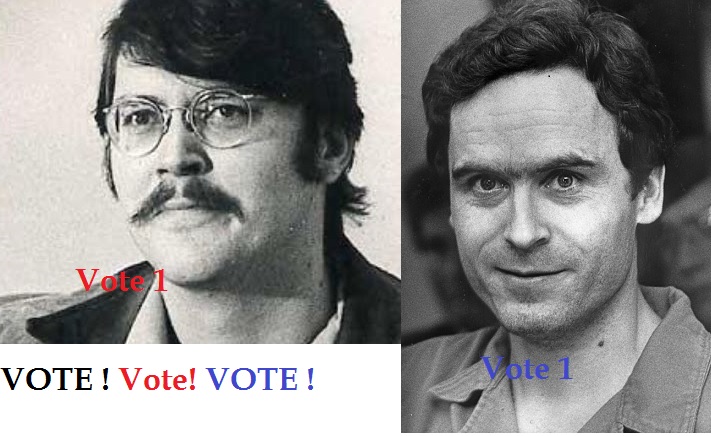 The seduction by the Serial Murderer and the State

There is an apparent seductive appeal to the serial murderer. Those mostly men who are remembered for their last name and the litany of their bloody deeds. Movies, books and in some cases fan bases are dedicated to them, they inspire art and despite their cruelty, for some there lurks a charm.  Famously Ted Bundy was charming, it was one of his tools that he used to murder.  Ed Kemper is almost nuanced in his ability to convey his terrible deeds, and again he has a charm that betrays the true beast that lurks beneath his glasses. Perhaps there is a civilised condition that allows us to sleep on instinct.

Beyond the celebrity murderers lurks a deeper and more widespread appeal to deadly charm that captivates both the morally neutral and those who consider themselves to be good people.   Inside the uniform of enforcement or military many assume that one requires courage, dignity, a sense of righteousness and most of all those wearing such an outfit will stand firm for the collective good. They work for a monopoly that uses the language of altruism to convince that it is an impartial safeguard for security and order but most of all it is ultimately benevolent. It is us and it is for us. Yet, it harms, constricts, feeds upon and at times destroys us. Often it murders abroad apparently for us.

Despite this, we can bear witness to its many misdeeds captured on film or by phone. Unlike a serial murderer whose moments of intimate terror are often lost in their victims’ misery, we can see with frequency many examples of when the State kills.  And though most of us want to see the serial murderer behind bars or executed, we have a complicated empathy for the State.  For Ted Bundy it was in his sentence that the sitting judge fondly complimented him.  A man who had raped, murdered, raped, mutilated and likely raped again young girls and women with brutal violence. And a udge, the supposed champion for justice of the people displayed a fondness for the man capable of such horror. He was Afterall charming.

We never saw the monstrous actions that Bundy inflicted, we could only read them and have them at best described to us.  We can see photos of the victims in their final indignity, a trophy to a now famous mans legacy.  And when we can see with our own eyes murder, captured on film many can through the magic of a loyalty contectualise the conduct. Whether it is a policeman murdering or the military.  It is through charm of the ideals of nationalism, the belief that those in uniform are some how doing this for a collective good.  The evil can be given a context, explained away.  We allow it because we are in some way complicit. A Ted Bundy can be tried before his peers, yet some one selling cigarettes is tried and executed on the pavement or worse inside the war on terror, suspects can be assassinated simply on the grounds of association.

The monopoly known as the State is made up of millions of public servants and yet their servitude is questionable and often ambivalent. It serves its own interests and at times that self interest can coincide with millions of individuals.  Stability, order and harmony is the ultimate interest of all government. How it manages to achieve this is determined by the regimes ideology and character. The goal is to perpetuate itself, to grow until what or when? Just as the serial killer’s aim is to feed his malicious hunger, whatever charm and benevolence that he may display ultimately serves that deadly and self-obsessed end.

For the liberal democracy the many voters are invited or forced to participate in a ritual of state religion known as voting. It is when the most narcissistic and sociopathic perform before an eager media and greedy-jealous public to promise, deceive and ultimately convince the voter that they are better humans. These individuals for what ever reason, generally, at best believe that they have the superhuman capability to rule and influence the mechanisms of government to improve an issue or society. The others, most often the victors simply yearn for power and the perks of politics and what life afterwards promises.  With all the skills of a serial murderer they smile and conceal what they truly know and like the Ted Bundy or Ed Kemper they view other human beings as disposable only to exist to be fed upon.  But in the end you are able to participate in the limited choice and when their careers end they can at times dissect their legacy with little remorse, the blood of policy washed clean of their hands because it was done for us, we voted.

Complicit in this deception are the thousands and sometimes millions of implementers, those who are morally indifferent. To them it is merely a job. Whether destroying a local business with bureaucratic bloat or in subjugating entire regions to the misery of war. They will do it with the sole self interest that they are paid and have a pension at the end of their career cycle. They have no great legacy or do not become famous; they are common and yet without them the politician, the State itself is nothing.  While the serial murderer has his hands, teeth, a hammer or knives.  The State and elites have the eager thousands as their tools for murder and coercion. Whatever consequences that others suffered is meaningless.  The tools of the State were obeying orders, simply enforcing law and policy.  And many will love them for it, because they are in name servants of the public. To kill a baby in a crib is criminal, to starve twenty thousand to death is legal policy.

In under any set of circumstances we can often come to an agreement that the torture and then murder of an unarmed person is abhorrent. Many of us live under a system that claims a rule of law, so that even the Devil has his day in court.  Men like Ted Bundy had many days in court. Despite his crimes, he was granted this right.  Even if the victim’s families yearned to see him suffer. The State determined that he should be given due process.  In doing so he was able to reveal both charm and intelligence, a cold-blooded murderer was suddenly human. But he was still found guilty.  If we are able to listen to the many voices of ideology and policy we can hear that others apparently do not have this right. People who have take no life for some reason are judged and tried in an instant than a man like Ted Bundy.

For enemies of the State, whether those insurgents-terrorists they can be tortured, imprisoned and sometimes killed without trial. Even if they are imprisoned on the grounds of being in the wrong area, likely never to have taken a life or even participated in the taking of a life.  Men like Julian Assange can face a purgatory of legal inconsistencies after being forced into house arrest and his detractors will crave his blood despite him never having brutally murdered anyone. Yet we are charmed into believing that we have rule of law.

Despite the footage of the murder of the Reuters journalists, the most famous of the Wikileaks revelations, many other clips are available that have also been revealed during the war on terror. Images and documents of admitted evidence that show mass murder of innocent civilians across the globe all as a result of policy. Whether the Pentagon or Afghanistan Papers each reveal the level of indecision and futility that the deadly adventures into other regions wrought and yet the appeal of the State remains.

Police murders in the United States have been so commonplace, that there only exception recently is in the nature of the outrage itself.  Despite this the State retains its charm. Many are inviting others to vote, for what? More of the same repackaged.  Many of the protesters are calling for an end of ‘systemic racism’, and inside Australia when another Indigenous man dies while in police custody, the outcome will perhaps be another Royal Commission. Those responsible will likely never face a trial and justice as a private actor would.

The State has so much appeal and many benefit directly that it is hard to conceive an alternative. The painful transition is too bitter to imagine instead the unborn will face more debt, regulation and tyranny. Those who question the State are considered radicals and anti-social. Abnormal. Those who yearn for it and call for more of it are normal.  And when the trending objection is caused by police brutality, the State again gets a pass and racism is the singular issue of blame.  What is then the solution? More awareness?   Racism unfortunately is always going to exist, but the State always has and always will give racists immense power to harm.

Until individuals begin to question and delve deeper into matters not much will really change. Many claim to want change and yet they only seek a rebranding of the status quo. Change is difficult because it means, change.  It is not just a word or a political slogan. It is a complete dismantling and overhaul of everything.  More of the same is not change.  It is the opposite.  Perhaps the solution is in allowing those who seek it to be free, to be free. If only somewhere on this Earth was available for like minded individuals to migrate and be free of the State. Utopia perhaps. But consider this, every piece of this Earth and soon space itself is claimed or overseen by a State.  And yet those who seek to be free of it are radical and the problems continues. It is not those who wish to be left alone that are imperial in their ambitions, it is those who claim the charm of ideological benevolence that continue to impose, manipulate and destroy under the guise of a greater good.

In the end George Floyd was looking for work, he had suffered because of a government mandated lockdown.  He then was accused of passing fake money, he was then executed in front of the world by police officers enforcing the law.  Perhaps there was racism involved, regardless this was another crime committed by the State. To assume that sexism is at fault because men like Ted Bundy and Ed Kemper targeted women, ignores the greater crime of rape and murder itself.  Can you reform such men driven by a deadly compulsion? Should you? And can you reform a monopoly that exists through coercion? We can only seek to end or limit such deadly entities, not delude ourselves in the pursuit of reforms. That is in itself a dangerous delusion.

The solution is not in voting for another face or management to sit atop of the monopoly, the solution is in ending the monopoly itself. The insanity to assume that others belong against their will is a violence that only a perverse ideology can manifest. With no consideration for voluntary conduct or interaction but through the threat of violence or inflicting it upon others is simply brutal. And then to smile and claim is a collective good is a madness beyond that of Kemper or Bundy.  Until we can look past the deceptive charm that we allow ourselves to be seduced by, then the mass murder and violence will go on in its present form all over this planet.  Liberty may not be charming in its honesty but found inside of it is a justice for all lives. And voting between evils only ever leads to more evil.