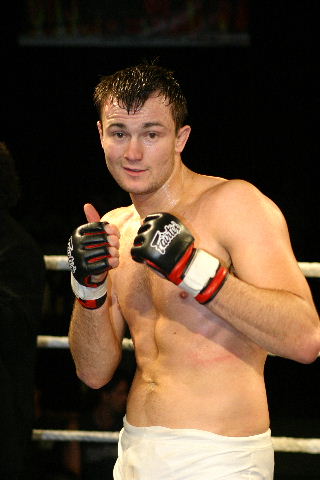 What martial arts do you specialize in?

Kym – MMA is the generic term But specifically, besides say ‘Cage Fighting’ I would say that an outside observer would say that I have a hybrid of Wrestling (freestyle-GrecoRoman-submission), Boxing, Kickboxing, Judo-BJJ. But for me it is just fighting, MMA or in the old days No Holds Barred submission fighting.

Why did you choose these arts? Did you previously learn them when you were younger?

Kym – I started Martial Arts at 13. I learned some Judo and TaeKwon Do and then become really ‘ecclectic’ meaning I tried to incorporate as many MA’s as I could. This was my Bruce Lee or Jeet Kune Do era.
Then I decided I wanted to fight pro and learned to train as though I was learning a trade or a craft, and that is how I see professional fighting.

What did you learn before you started to be a professional?

Kym – Basically whatever martial arts I could dabble in. I turned pro in 2003, and MMA was very young in Australia then, especially in Adelaide. I was considered a ‘Submission Fighter’ by the promoters because I had good grappling and submission skills and adequate stand up-striking.
I would say my early martial arts from a kid onwards were
Tae Kwon Do, Boxing, Kickboxing, JKD and grappling.

As a Martial Artist, did you find any arts that you found boring? If so which ones?

Kym – Boring… well not to sound negative, I try not to have ANYTHING to do with martial arts in a traditionalists sense. I liken it to Religion, often they are belief based. Whereas say professional fighting is based on science or fact. But I find all martial arts interesting. I believe that you can learn a lot from many sources. So while in one moment a certain aspect of a combat sport or martial art may be boring, it can in another be exciting and useful. Usually boredom comes from over doing something or too much of the same. Or in a negative sense because one lacks imagination. I would say I am more of a fighter and less a martial artists. But then that definition tends to vary from person to person. So in training as a professional fighter, you have to train proper and realistic other wise you get beat up and hurt. Whereas for a lot of martial artists they would never need to face such a situation.

What do you reckon is the most devastating art? Eg, punches, kicks, locks, takedowns etc.

Kym – I think you need to be good at all. They are not arts, but ranges or techniques.
A boxer has good punches.
A kickboxer-Thai Boxer has good kicks-knees.
A Judo-BJJer-Sambo guy has good locks or submissions
A wrestler has good take downs and control. If you are really good at one, and ok at other, you will do well. So each is dangerous. And for self defence that risk can become even more extreme so awareness and skills are even more important.

How do you feel when you step inside the ring/cage? Does it give you more motivation to win than you had before inside? Has any opponent intimidated you?

Kym – I feel apprehensive. The ‘fear’ fighters feel is more a case of performance anxiety. Meaning you are ‘scared’ that you will not do well, or lose, letting everyone down, and ‘looking bad’. I have never been scared in the traditional sense, or frightened I might get hurt. I suspect some people may do, but for the most part professional fighters, that stick around for more than one fight do not feel this. Simply because if you train hard, have guys to wrestle hard and spar with you have been in those situations already and the cage only allows you to perform and show case your hard work.

Kym – Capoeira – as a cultural art is excellent to watch, like any dance. It has good music and flows lovelly. It has attributes that can be indirectly and at times directly beneficial I think.
Karate- has a lot of variations to it. But to me seems very formal, rigid and out dated. Kyokushin would be my preferred style of this martial art. It has interesting foot work and striking that is very direct. We may see some good and effective Karate fighters in the future enter MMA as we have seen in K-1.
Kung Fu- is like Karate, in the sense it has a lot of variations and ‘styles’. It is very flowery and seems to be more theatrical at times. I think because how it is practiced often it lacks practical application and tends to lean into more internal or meditative aspects, which can harm the practical assets. But some people in Kung Fu are pretty good at what they do.
Wing Chun- This is a kung fu style invented by a female nun in China, as legend has it. It is based on the center line principle where you should strike down the middle of your opponent. Like most martial arts, it is a lot of theory. It has a lot of trapping and actions that have influenced other martial arts like Jun Fan and Jeet Kune Do.
Kickboxing- is a sport that mixes full contact karate with boxing, it has gone through some changes since its invention in the late 70s. I think its a good sport to watch and has some decent tools. A lot of striking sports come under the generic term ‘Kick Boxing’ but it has good aspects to it.
Muay Thai- is an aggressive Thai-Cambodian style of striking, it has aggressive strikes and is very popular. I think it is too attrition based, meaning it is about dishing out a lot of punishment, while also having to take it too. But it has great frames and sharp angles and you certainly feel it when you spar a good Thai boxer.
Ju Jitsu- this has alot of variations. It means the Gentle Art, it is an evolution of the traditional methods used by the Samurai. Brazilain Jiu Jitsu has shown its effectiveness in combat. Traditional Japanese Ju Jitsu is still very popular for security and police forces.
Tae Kwon Do- This has very fun to watch kicks, and is very visually appealing. It is a bit like Karate in the sense it is very rigid in its approach to combat. That being said it has good elements that can help one with flexibility and agility and a good kick can be very dangerous.
UFC- Well this is a promotion, the biggest, for MMA. But if you were to define UFC as say Ultimate Fighting, or Cage Fighting then I would say that this is the best. Because it allows you to actually fight and train to fight. MMA or UFC is really a modern inception of what the Ancient greeks practiced in the first Olympics. Pangration. But like all sports it needs an understanding of context. So you can play and train it for self defence but you need to know that self defence is not a sport and has a lot of other aspects to it.
Which means “all powers” from Pangration we got wrestling and boxing.
So while to many the UFC or MMA is a new thing, it is in fact really an ancient concept and sport.

What ones do you reckon are powerful and not so powerful? And which ones are most effective on the street and competition?

Kym – I think if you want to learn how to defend yourself in the street.
Learn to box or train MMA (UFC). But also what is important to street fighting is attitude. Dont go looking for trouble, be sincere and polite. But also assertive and ready to accept that out their lurks real jerks. When you encounter those jerks and should you have to defend yourself or others, then be ready. MMA is good because it allows you to be prepared for an actual fight.Boxing is good because 90% of street fights you can end with a quick shot to the jaw. Boxing gives you the ability to slip, roll, weave and block real punches, also make syou comfortable with them, and shows you how to punch proper.The reality is that ‘street fighting’ is an illusion. Often you are either ambushed by a thug-thugs, and get jumped. So good fitness, and the ability to adapt is key here. As the US Marines teach in ambush situation, fight your way out with MAXIMUM aggression…and here is where the attitude part kicks in. And the other scenario may be the confrontation, where words are shared and then the ritual of chest puffing follows…often you can avoid this, but if it happens be ready for the ‘sucker punch’ by him or his mate.There are no techniques perfect for self defence, its not like first aid. You just have to be aware of your own bodies abilities and get it in good shape and ready for ‘war’. Whenever and wherever that may be. There are no secrets or mysteries. Just hard work and a willingness to adopt a warriors mindset and lifestyle. So train for sport and train for self defence.
Sport can help with self defence, if you train like an athlete and learn from the combat sports and use that with your self defence training then you are in a good place. Just be honest in your training and your aims.

Thank you so much for your time.