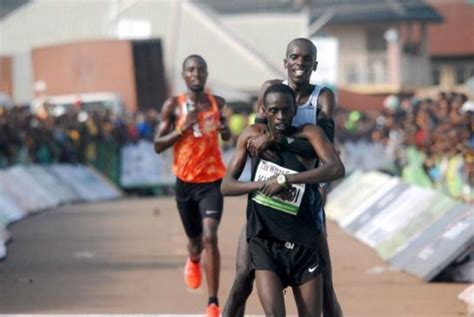 There is footage that on occasion does the rounds on social media of Kenyan runner, Simon Cheprot who in the last metres of a 10-km road race stops to help Kenneth Kipkemoi. The sight of Kipkemoi as he nears the finish of the 2019 run is one of tragedy. His body collapses under the heat and strain of the foot race. At first stumbling and then collapsing, crawling in desperation to cross that line which is metres from him. The other runners pass him. Kipkemoi rises and falls, he is in pain. Exhausted. The fellow runners continue to pass on, the finish line is all that is in mind for them. Until Simon Cheprot reaches the fallen runner. Cheprot lifts the fallen runner, it is a struggle to get Kipkemoi to his feet, eventually both men cross the line together.

After the race, Cheprot is interviewed and asked why he stopped to help his fellow runner. He replied “…when you are walking and you see someone sick on the road. Help him. Do not leave him, that is the first thing that came to mind.”

Cheprot refers to his fellow competitors, not as rivals or even as competition but as colleagues. The fellow travellers who are on a similar journey, their existence and drive is don’t a detraction. They improve, they sharpen, they offer a feedback in order to excel. Those who exist in competition make us better, not worse. It is the absence of the competition that often the worse in all of us develops. It weakens us all and prohibits alternatives and perspectives. The enemy are those that deny us such challenges, that inhibit our spirit and energies. In such moments of competition the nature of humanity is on display. As was demonstrated by Cheprot and the other runners.

To work so hard and drive oneself to the point of mental and physical failure is an elite experience. Those who may ignore a fallen man and push on, the focus of victory providing a tunnel vision of pain and drive, is another perspective of competition. The aim is to win, or finish as best as one can for self, family, team, honour and prize. The hunger that can compel one to such levels of competitive purity can draw out a savagery, a bestial essence that dwells deep inside of humanity. Even indifference.

Others may come so close, injury or fatigue will take them. Pushing self to the point of extremes, where mortality presses into the envelope of human fragility. The will to win, to be the best or do better overrides the biological demand to stay relaxed, remain safe and be lazy. To push beyond that and into a place of strain is for a driven few that remind us all just how powerful the mind is when it demands more from the body. Then failure, breakdown, injury. A snapped hamstring, shattered bone or complete shutdown. Leaving the mind to drag the broken body just that bit longer, no reason or rationale thought. The competition is the instinct, the will is all that retains,

For the few who can reach such heights of competition and witness a colleague collapse. To rationalise the balance of ones own desires to win, to do better and to justify the distance and pain that it took to reach a point of elite competition. Weighed against the compassion to help a fallen man who has collapsed under his own ambition. To relinquish momentum, to sacrifice ones own limited energy and to forsake a competitive victory so that one can help another cross that line. That is the human spirit. It is the choice and the distinction between winning at all costs and doing the right thing, regardless. It is the moral dignity of the honourable.

Endurance sports especially are graced with such moments of those who reach for a fallen competitor to help them cross the line. To give them directions, to push them over the line, to help when they are not required to. It is also filled with those who do not. Those who ignore or because they are beyond comprehension run on. We remember those moments of inspiration, the good person who helps and for a moment they are praised and become a viral treat. The fact that it is exceptional is the exceptional fact. That more are not compelled in their day to day to take a moment to help another, not for reward or praise. To do good regardless. Those moments come across each of us from time to time, and for whatever reason we may look the other way or run on just to get over the line ourselves.

It is then when a man like Simon Cheprot lifts up another runner that we celebrate with teary admiration. Sharing it on social media or proclaiming that more should be like him. We are the more and that moment is every day. The fallen runner may not be as obvious as a struggling Kipkemoi and the competition may not be as extreme as a foot race over distances. It does not take a God’s intervention or the altruism of social pressures but the awareness and willingness to help. To be a better person, to have strength in self, to have that courage and capacity to lift up another. To not imagine that the world exists for you or that another persons happiness and success is at your expense. The other runners are the reason you are running, they are what makes winning so powerful.

It is easy to hate and to surrender to jealousy and spite. To demand that things should always be better for oneself. That is the tantrums of our inner child that many of us never grew away from. We only have our own perspective and when the pain of the run can feel too much, it may seem easy to latch out at others and fixate on their strengths, that they seem to be that much further ahead than us. Maybe they are that collapsed runner, just because they are not on the pavement in visible agony does not mean that within a turmoil does not grip them. You can run on, fixated on the finish line or, should they fall, you can help them. It is a choice we will make in our lives, sometimes just once or maybe often.

One does not have to be mean and hurtful to those in peril or to harm those that for a moment they are stronger than, to be powerful. One is not righteous just because they stand with the mob. One is not winning just because it seems easy. The true wealth is ones reputation, ones health in mind and body. And to have the dignity to help regardless of reward and praise, is a decision we each must make. To do so, even at risk whether in crisis or while playing a sport is for the individual to distinguish themselves in that moment. Perhaps one needs to stop looking for inspiration in others and simply be inspired to do what needs to be done.

There will be those flakes in your lifetime when you can be so concerned with your own finish, whatever that victory may be in the moment. That you will run on past another person who is in pain, is in need Or you can slow yourself down, help them up and cross that line with them. You do not have to be Simon Cheprot to do that, just the right person in that moment. Doing good is an action. And sometimes doing wrong, is inaction. No one can tell you what do to, only the moral dignity that you carry inside can guide you. So run on or stop and help, it’s your race to the finish.