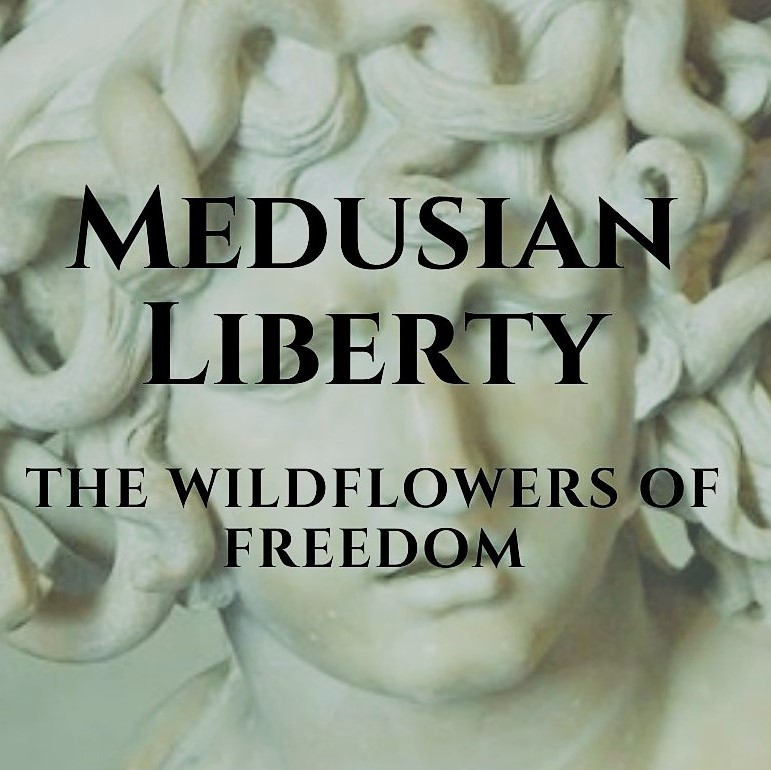 Myths are not real, they are stories that are told to convey morals and lessons. History and culture is rife with such myths. The good ones have variations, those that depict heroes as villains and the reverse. Medusa is not the villain of this story. She is for many a symbol of femininity, a woman whose curse was beauty. A quality that attracted men to her, men who felt it was their right to have her. Regardless of her will. She was raped, then through the curse or blessing of a god, her beauty twisted into such a manner that any man who looked upon her would be turned to stone. She became a freak, a monster. Was it because of her abilities? Or because she was no longer the victim to be taken? Only a threat to those who sought her. She yearned to be left alone. And still a man came for her head. Liberty is after all depicted as a woman and to many females, it is an expression of feminine dignity.

Some women do not want kids, they do not desire a family and have decided that they no longer need a man, or any partner romantically. She does not seek the corporate lifestyle because her life is not defined or reliant on a career. It is a choice that many of these individuals have come to after years of being ‘normal’. For whatever reason the mitosis of their womanhood has led them to such a moment and decision. They are not a threat to anyone. They are often self employed, motivated and active individuals who lead their lives according to their own will. Yet, they are often forced to validate their decision. An insecure society pursues them, insisting that they are abnormal.

This depiction of abnormality often translates into the apparent unhappiness that women should feel if they are not enriched by traditions. That she should obey the biological need to reproduce or that in having a family she may find purpose. This may be the case for many, it certainly is not for all. Often depicted as deranged spinsters, crazy cat ladies, witches or that their single status is not a choice, they are unlovable and thus avoided. More concerning are the voices inside of the supposed individual liberty movement that also claims women belong in marriage.

Anyone who has spent some time challenging the war state or any actions of coercive government can understand how hard it is to be constantly forced into a position where one needs to justify their principles. It seems stupid to say it openly, that murdering children is wrong. Yet, this is in pragmatic reality a minority position because once you strip back the many layers of context most turn into Henry Kissinger. For those who live inside the frontiers of fringe culture this too can be the case. In recent years the liberty movement has gone from one of unique and diverse individuals to a political cabal that is seeking to homogenise culture. Some it seems even want a king.

Those who claim to love liberty and individual rights will often pay lip service to the wars and the distant atrocities of the state while focusing in greater detail on the culture war. Conflating non-conventional lifestyles with tyrannical government. That some how femininity or liberty for that matter is defined by a particular definition. Such a perspective is unimaginative.

“Little girls, listen closely
‘Cause no one told me
But you deserve to know
That in this world, you are not beholden
You do not owe them
Your body and your soul”

It is not selfish to want to be left alone, a person has the right not to be harassed or raped. They do not owe anything to anyone, this all seems so obvious and yet with the miracle of context it becomes a complicated onion of miserable obligations. Liberty is a wilderness, it is not a structured orthodoxy. It does not come about because of conservative values or is unique to those who have a traditional family, those who do not seek these things are not anti freedom or enemies of either. In fact often the reverse is true in practice.

“No Means No” should be as powerful as “Don’t Tread on Me”, each have an ideological symbolism and are powerful statements of individual and communal dignity. Not to be raped, pillaged, enslaved, killed all should be universal rights. In a world where such statements have meaning, relationships and interactions of will and voluntarism are of greater value. This is liberty. The right to choose who one wishes to interact with, to be with. To determine what familiar unit one has, their own sexuality or celibacy. Not to be bashed into a generic category because it satisfies a societal norm or the puritan mob. A woman is not just a baby maker just as a man is not her bread winner, liberty has suffered during this tenure that certainly does not mean it will cease because some wish to not abide with traditions of man and woman.

History is stained with the burning of women accused of being witches, women who stood up to masculine empires, warrior queens as Boudica who defied Rome or brilliant minds such as Hypatia each brutally wronged. Unique individuals who did not yield to the convention, instead trusting the judgement of their own will over the obedience to others. Boudica was a proud woman who defied the external power that defined itself by conquest, Hypatia was a wise lady who helped spread knowledge and challenged the ignorance of doctrinal faith. As with Medusa, they were pursued and not left alone.

Inside the tangents thrown against the social justice left, the dignity of the individual is lost. Liberty is not a conforming blanket that is just for those of a particular nation or language, those of a monotheistic God or any religion for that matter. It belongs to everyone. Liberty is feral, the bush beyond the picket fences and managed lawns. And yet those who only know the conformity of a house can not imagine the home of others should it differ in structure and routine. That is a condemnation of those who lack imagination and their own insecurities, not for those who wish to live outside of such constraints. For some agency and energy is more important than income and perceived security.

To hide among the crowd, pulling up her face mask and her hat down so that desperate eyes do not track her, to pursue her and interject themselves into her life is normal. To avoid those who may, passively impose themselves to the more predatory is how such women HAVE to live. They can hide inside the clutches of a strong man, beg for the monopoly on violence to protect them or they can find their own solutions. Networks of like minded women sharing experiences and solutions, thriving inside the market of ideas and commerce. They are as free despite the state, its imperialism does not make her any safer. It is for her alone to do that, within her own community. This is the liberty that lurks beyond social media, think tanks and seminars. This is the liberty of wild flowers.

In an attempt to challenge the contemporary “left” ideology of some Western governments one may forget the anti-freedom of past conservatives, those of the right. The cancel culture of men like Jack Thompson whose crusades against video games and music was not unique to just him but an entire cult of right wing moralisers. Those who always found exemptions in their sacred constitution and for freedom itself. When the pendulum returns, it will be those crusaders who will be burning the podcasters at the stake, for different reasons but always an anti-liberty one. Those women of their own destiny will become the witches of the modern era, vilified and hounded because they may choose to be child free or do not want a man to watch over them.

She does not belong to you, or to anyone but herself. She owes you nothing. She is not an egg factory obligated to breed or stay at home. Individual choice is not right or wrong, Another perspective is not a threat to your own. Those who claim to love liberty should put down their memes and theories of praxis and understand that individual liberty is about individuals. Otherwise the goal is just another ideology of collectivism. Just because you want her to yield, does not mean that she should or will. Beyond Twitter and the podcasts are thousands of women living liberty, they have community and are thriving. It is not a theory to them, the flower pushes through the crack of the pavement no matter how many boots may trample down, if you can not accept this then perhaps you are just not man enough for any philosophy that embraces freedom. Because clearly she is.

It often seems that those who encroach, impose the violence, take and use force never seem to need to justify their actions and imperial ambitions. It is considered normal, it is the conventions of the culture. To regulate, steal and steer lives with violent threats or clumsy incentives is the orthodoxy, various moralities and ideologies may infect this practice, but the practice remains. The outsider are those who wish to be left alone, who do not wish to do harm either directly or by proxy and in the case of feminine identity some are those who do not need marriage to define them. They are not broken or witches, they are human beings that have considered their lifestyle with dignity.

Such Medusian women are one of many heads of the snakes attached to the ethos of liberty, they wish to be left alone and should not have to justify why. They are by their own design hidden inside the cracks of normative convention, they are expressing liberty and they have their own community of life minded free spirits. Perhaps there is a lesson in their dignity for all of us, regardless of ideology or gender. The problem is those who are always seeking the heads of those who are different, who want to be free. She just wants to be left alone, so stop coming for her head. It is not yours to take, it never was.

“It appears to me impossible that I shall cease to exist, or that this active, restless spirit, equally alive to joy and sorrow, should only be organized dust. Surely something resides in this heart that is not perishable—and life is more than a dream. “ – Mary Wollstonecraft