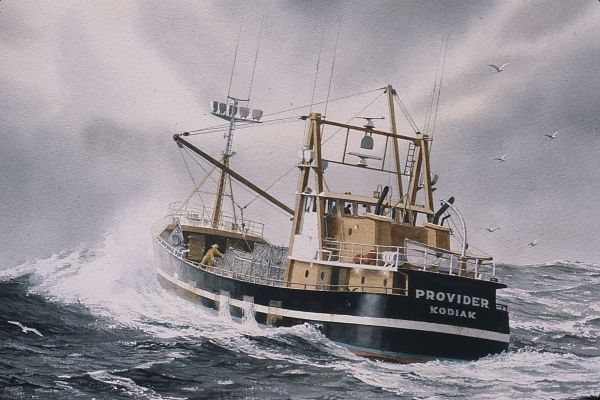 The early autumn wind washed the scent of the ocean inland, though the sun rested with warmth above, it was the approach of grey clouds that was of note. A man in his thirties sat on a solitary bench, he watched the crashing waves and fed himself from the minimum purchase of fish and chips still warm inside the wrapping paper. He enjoyed the feed, he stole the time for himself on the busy day to be alone, to hear the nearby waves as they crash. It had been another terrible morning, trapped, a prisoner, working a job he despised. Outside, in the sea breeze, he was free.

An elderly woman struggled nearby, she pushed her walker with effort. She stopped and looked at the bench and then then man, “Do you mind if I sit?”

He moved over, making room and smiled, “Not at all”

The woman, her cheeks red, face cracking with scabs on otherwise soft skin rested herself onto the bench, she ran a hand through her silver hair, “I thought that I best get a walk in before the rain.”

“It looks like it will be soon” they both looked to the nearby dark clouds.

“Yes, my daughter told me to stay home and rest. Rest. All I do is rest, I miss walking on the beach and entering the water. The doctor says that I am no longer allowed to those things.”

“That’s unfortunate, though it would be cold today.”

“I’m from Devon dear, this is a perfect day for a swim.”

He nodded and fed himself a small handful of chips as they both shared the sight and sounds of the ocean, occasionally passer-by’s would disrupt the view. The older lady rocked into his direction, “I had a fall the other week.”

She showed him the bruises and cuts that were slow to heal on her wrist and forearms, “I just loss balance and then was a pathetic heap.”

“I hope it heals fast. That looks nasty.”

“Oh, I have had worse. I am the youngest of five brothers. All were fishermen like my dad.”

“So you like to fish?” He asked as he fed himself the last of the battered feed.

“All I ever wanted to be was a fisherman. Just like my Dad. Girls could not even go out on the boat then, it was supposed to be bad luck. Women can do whatever they want now. Not then.”

“You never know, when you heal up, maybe you can start a new career out at sea”

She smiled and pushed her hand into his shoulder, “I suppose I don’t look my age. How old would you think that I am?”

“I suppose sixty-five, seventy?” He said, though she looked in her eighties.

“Eighty-five, would you believe it?”

“Oh, goodness no. You look much younger. Just lie about your age when you apply for that fisher-persons job.”

She laughed softly, thought about how she would now manage standing on a boats deck, let alone hauling in the nets filled with water and catch. He looked at his phone screen to note the time and if he had any notifications.

“I try to keep myself healthy, I can’t wear make up anymore. It hurts my skin, though I just wear a little bit on my lips”, she pointed her fingers to the scabs on her red cheeks, beneath scarlet lipstick smudged across tired lips.

“These days you won’t need make up, you can just use filters on your phone.”

“Oh, no thank you. I am past trying to deceive a man into my cot,” she blushed with an innocence as she adjusted a wool vest that covered her jumper.

“I thought it was going to be colder, you just don’t know what to wear for the day now” she fanned herself as he rolled up his rubbish into a ball.

“Well maybe you need a swim, the ocean is clearly calling you.”

“I love the ocean. All I ever wanted was to be a fisherman like my Dad and brothers. They would go to sea for weeks, then when they came home it was all work for my Mother and I. My Dad would pickle his own fish while out at sea and bring it home proudly for mum. If I was a good girl I would get just one piece.”

“Have you ever made it yourself, those old recipes?”

“I have, though it’s just not the same. Maybe something about the sea and the waves or maybe Dad used special ingredients, who knows?”

“The lost recipes of fishermen, buried beneath the seas”, he said while facing the beach and waves.

She pulled a handkerchief from her purse and wiped her lips, “I never was allowed to join him at sea. Not once. My brothers all went at a young age, it was what they were destined to be. Fishermen. Because I was a girl, I had to stay at home. Help mum to wash, cook and keep the home. Things were much different then. Much more tradtional.”

“Have you been out to sea much?”

“Not really. People can charter fishing boats and go out like tourists now, whole families. Can you imagine that?”

“I doubt it would be the same as when your Dad went to sea.”

She smiled proudly, “certainly not. It was hard work back then. He never complained. He was always happy to see mum and me. He was a good man, tough but fair. He was harder on my brothers than he was me. Though at least they were able to go to sea with him. “

He wanted to excuse himself and leave but he could see the sadness in her expression, “I’m certain that he thought about you and your mum often while he was away.”

“He was stubborn, old fashioned. Mum was the mother and wife, stay at home and be a woman, cook, wash and make babies. That was my destiny. Tradition. Dad and my brothers worked hard and long, tired often but they provided and came home proud of their catch. He was a provider as my brothers would be too.”

“He sounds like a good man, all good men”

“They were. The last haul before returning home, the crew was allowed to keep, to feed the family or sell. Mighty proud Dad and they were when the last haul was big. Mum could never be proud like that, only that she had healthy children and a man who provided her with fish and a home.”

“Times certainly have changed for the most part,” he said as he looked at his phone again.

“Dad has been dead for fifty years next month. What would two weeks at sea with him have been to fifty years without him? He has been dead longer than he was alive in my life. I was thirty-five when he passed. Fifty years, it is a long time. My husband dead twelve years, my brothers all dead in the past twenty years and my Mum, she died ten years after dad. What is a few weeks in all of those years?”

His eyes went from her to where her teary gaze was focused on. The ocean. The two strangers sat in silence for a time as the waves crashed as they had since before history, the same sea that had carried countless fishermen and unknown generations of their off-spring. Many with wives, daughters and sisters locked on land waiting and worrying.

“I will go swimming when my wounds heal. I just won’t tell my daughter that I did. If I drown, then I drown. Better to be lost to the sea doing what I wanted than to die in bed watching repeats on television. All she wants me to do, stay at home and rest. Watch the telly, like a reverse goldfish watching moving glass. No thank you!”

He smiled, “well I do hope that you are able to swim and that your injuries heal. I unfortunately need to go. It was a pleasure talking with you.”

“I suppose that I should get back before it rains. It is just painful pushing the walker, up any hill the angle hurts my wrists and when it hits a rock it goes through the arm and body with a horrible jolt.”

He looked at the worn thin wheels of the walker. He pushed it and noticed the stiffness, “do you mind if I have a look at the wheels?”

He pulled the walker closer, one of the wheels had hair wrapped in it, fouling up the rotation. It took him a little effort to remove the offending hair. The other front wheel had a small pebble trapped between it and the frame. He removed the pebble.

The fisherman’s daughter slowly stood from the bench and positioned herself behind the walker, she pushed forward and noticed the free movement of the wheels, “Oh heavens, it’s like new!”

Noticing the worn tread of the rubber and the flakes of missing paint, “maybe not like new, but hopefully easier to push. Though you may need to replace your tyres.”

“Oh thank you dear, have a lovely day and thank you for the chit-chat.”

He stood and nodded, “Thank you and I hope that you are able to swim soon.”

She waved him good bye and pushed the walker along, when she was several paces away she turned and smiled, gesturing with vigour at the contraption that assisted her walking.

The strangers parted ways. He would return to a job that he despised, obligated and trapped. Stressed and strained. It paid him well and allowed him brief flickers of liberty, to sit by the sea and have a few moments of the day to himself. Some minutes to do what he wanted, piled beneat hours in a day doing what he must.

The fisherman’s daughter would pass away a few days before the fiftieth anniversary of her dad’s death. Never a fisherman, she was a mother and a wife. The wounds from her fall had not healed in time for her to enjoy another swim. Her last days were far from the sea breeze and crashing waves. Resting in bed, watching a television flickering with re-runs.