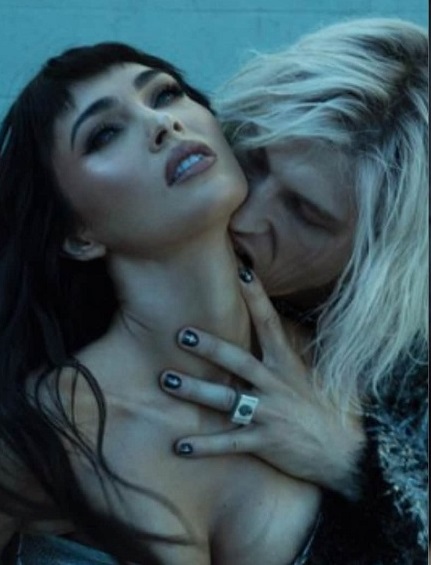 Megan Fox recently claimed on social media that she and other Hollywood elites enjoy drinking each others blood. This has excited those critical of Hollywood culture, in their minds it proves the evil secret Pagan nature of the liberal American establishment. As though a sub-culture of drinking blood has never prior existed or that the symbolic drinking of blood and eating of the flesh of a body is not an already widely accepted ritual. In any case, a video of a woman boasting of her involvement in the voluntary ritual of blood drinking, is upsetting to some. Drinking blood is bad. The spilling of blood however is still very much accepted, especially of the innocent.

It is a peculiar thing, this war of the cultures. The politics of human morality, a religious tug at the strings for control, not only of government but society and its institutions. At the moment the socially progressive American left has infected most Western political and corporate bodies with its academic skewered social world view. A mutant form of socialism for the privileged bourgeois aristocrats, the central planners world view from the lofty heights of comfort and digital distance. The proletariat and peasants need to be controlled, steered and lectured by their betters. The “dislike mob” and misogynistic critics who do not enjoy the same entertainment or news services that these anointed elites have created are ‘problematic’ and need to be silenced and controlled. As is the all too real caricature of the ailing culture masters that are slowly losing control of the narrative, influence in governance and corporate bodies.

It is a particular arrogance that can only be learned inside the highest echelons of academia, so here we are. Such modern day progressiveness will likely be the beliefs of tomorrows conservatives, at least in part. Much of the eugenics and racialist of the scientific progressive era has wafted in and out of vogue, often shared by the statistics quoting race realists who find themselves in the comfortable embrace of Western right wing politics to the reactionary anti-white man left who is so anti-racism that it has created an entire tiering system of privilege based entirely on the collectivised concepts of race and genders. The Hitlerian chauvinists agreed with such an approach generations prior. The camps scream at the other, smug and emotional at what the opposition does in the extremes. Each share the common desire to rule, to control, to impose, to have government. As all collectivists do.

After the social media announcement from an actress with a waning career, outrage has stirred among the memers and digitally addicted. The observers of Hollywood condemned and jeered with disdain. Meanwhile in the blood and flesh world, few noticed. For those real victims of left and right policies the world over, the misery of the experts is ongoing. What some elite Hollywood princess fills her golden goblet with is less important than where their next clean water source is or even if they can afford to fill their car for the weeks travel to work. These are the concerns of those who must suffer the culture warriors rulership, not what a lady drinks.

In distant, may as well be alien lands, babies cling to the drooping dry breasts of their mothers, flies clench to their sticky skin. Mother and child locked in an exhausted embrace, so desperately hungry that the body has almost shut down the ability to digest and so thirsty that animal urine becomes the nearest clean drinking source. High above drones and fighter jets circle and zap in, instant death and destruction, followed by endless terror and pain. This is the culture war that they must suffer for being poor and non-Western. The left and right of Western politics hold hands fondly to make it possible, spilling the blood of thousands to satisfy the vulgarity of foreign policy. It is unlikely that any Pagan blood drinkers fly those jets or operate those drones, that is usually reserved for the accepted faithful of the popular religions both theological and secular.

Liberal democracies the world over will perform their regular rituals of elections, where the partisan bickering will point fingers and stir concerns over moral necessity. Prohibitions and censorship will continue, it just will be performed for other claimed concerns. The left will go after fake news, racist and hateful content and the right will seek to protect national security and ensure that pornographic or violent content does not impinge upon the moral decency of the nation, or world. The support of non-democracies, interfering with foreign elections and the destruction of civil liberties all in the name of democracy and freedom, so goes the justification. The same monopoly and legions of amoral mercenaries will enforce either ideals eagerly, it is after all just a job for them.

Overseas on the fringes of empire, new foreign enemies will be found. At present within the sphere of US dominated thinking, the left seems to want the blood of Russians, women, children, athletes, artists, oligarchs, the lot. While the right prefers to focus on the Chinese and those other believers of an Abrahamic God, Muslims. What occurs South of Texas, in Africa and perhaps someday in space happens outside of popular conversation, but death and imperialism still occurs regardless. That is the one true united culture, war.

The outrage and cancel culture is shared by both wings of statism, the trouble is the hypocrisy is a whisper beneath the self righteous screaming. Neither party is willing to acknowledge it. They don’t need to. It is not about being right or wrong, just Left and Right. To impose ones own standards of morality onto others, while seldom abiding by them. It is a lack of imagination to understand that the world is truly complex and full of nuance. Instead it is the insecurities and cowardice of those who need to be wrapped up inside of a mob, to have a powerful nation state that is influenced by ideals that make them happy and secure. It is imperialism, it is religion, it is how government sustains and functions. It is always in need of reform and to be run by the right people, the amoral mercenary class that fill its ranks enforce, impose and administrate regardless. So long as perks, pensions and pay come to them, what they do, who they serve and who they harm matters little. The rationale being that it can’t be wrong, so long as it’s legal.

The real culture war should be fought against the culture of war, the waging, enabling and adoration. The culture that celebrates nationalism and the tyranny over the different, the intentional starvation of strangers and the mass murder of the innocent and ‘guilty’ alike. That is the prevalent culture, it is imposed both domestically under the guise of abstracts such as the war on drugs, terror or many regulations and it is often waged abroad in wars that are not even declared. Despite the many real victims of this policy culture, it is the imagined ones that are championed. The culture war has been waged since day one, tyranny and imperialism against peace and voluntary individual interactions.

So for this five minutes, drinking blood is outrageous and proves every conspiracy correct. Perhaps by the time this piece is finished another moral concern would have arisen to be piled upon those long forgotten, but for a time so concerning. Along with planking, Pokemon Go, marbles, Dungeons and Dragons, Tales from the Crypt comics and so on, the vocal moralists will find something else to point to and decry. The lesson once again is, spilling the blood of innocent is apparently morally righteous. Those upset over the drinking of blood tend to find an engorged excitement each time their national military discharges death and destruction from above on some distant family. The civilised hubris to know what is best for others, to force and even murder them to satisfy this need. That perspective is privilege. If God does not will it, the State, the real religion most certainly does. After all, what is but a cup of blood compared to the oceans that your government has spilled, likely with your blessings. Bottoms up!