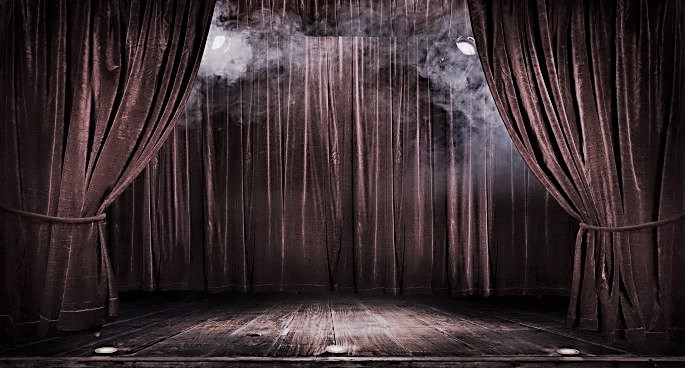 ‘The Show Must Go On’ short fiction

Short story from ” A City of Nights” coming soon…I hope.

Karen Vangelo stared into the mirror, around it yellowing newspaper clippings, printed photos and decaying stickers all of which were at least twenty years old. Tangible reminders of a better time, a more youthful self, when the smiles hurt less. The theatre lights wrapped around the glass and illuminated her face, she slowly removed the make up. She had been sought after voice, a presence on stage, millions of eyes had feasted upon her as she made love to their ears. Now she felt a misery as the face of her true self smudged free, one dab at a time.

“You may as well be a clown now” she mumbled, her cracked lips quivering beneath the once vibrant red lipstick.

Karen looked up to the top left corner of the mirror, forty-five years ago, when she was twelve. A young attractive girl, dressed as a woman. The photo was faded, her long blonde hair, white teeth and beaming smile, she was so naive. It was a week from that photo, she recalled with painful clarity, that she first learned how the world would be.

“It is all a performance, the show must go on” she recalled the words from one of many directors. Perhaps her life was all to be just a show. A performance it seemed then for the lying smiles of men who adored talented young women like her. The lingering fingers, the pressing palms, the heavy eyes and then the sudden actions once she was alone. Over and over again. Her parents had signed her soul to the devil, she was pretty, a budding flower and she could dance.

“But my could I sing, my voice, could I sing” she whispered as she removed the dark liner from beneath her eyes.

The other dancers all understood, they could be jealous of her talents and even resent her for rising in fame. One evening, when she was fourteen, an older dancer that had often teased her walked by while she sobbed in a corner. Far from home, it had been the last performance of the evening, exhaustion and the realisation of what awaited her later on that night ripped her to the bone. The older dancer looked down and handed her a tissue, the woman did not say anything. Nothing kind or nasty. For a moment they shared a gaze, they understood one another. Never again did that older dancer harass her. She understood.

Along the top of the inside of the mirror was a wedding photo, she was twenty-one, her ex-husband Dan, thirty-eight. He was the first man that had ever been nice to her, no insincerity or deception. Proper nice. Karen smiled, he loved her. Though she was difficult to love. She hated loving him. She was a performer. Her life was travel and shows. Dan, tolerated it, they had met by chance one night. He bumped into her and was kind, his eyes were warm and his smile was welcoming.

“Dumb little girl and prince charming,” Karen garbled as she poured herself a vodka. Dan was not perfect, though he was not a bad man. She was the problem. He never cheated on her, never hurt her, he just tolerated her. Maybe that was the issue, she wanted him to pull her in line. To stop her from the cycle to protect her from herself, and the world that she was in. Karen never told him about her agonies, she could not bring herself to. To him, she was a princess, he would have died building her a castle. When he found out that she had cheated on him, five years after she had promised him those sacred vowels, he drove his car over the ledge one dark lonely morning. She got the news while interstate performing and later on that night she sang better than she ever had.

“Looks like I need another bottle”, Karen tipped the empty glass upside down, she waited for any liquid to drop from it. Like her eyes nothing fell. Karen looked at the mirror, she gazed into it. Karen had seen her face so many times before, she had become adept at avoiding her own eyes, to look past herself just to objectively observe what she looked like, to make sure that the mask was on. ‘The show must go on’, those moments like now when she did look into her own eyes she saw nothing.

“Give me one fucking tear!” Karen said, it was the last thing that Dan has asked of her. She did not cry at his funeral, she was relieved that the marriage was over. She did not want him dead, she felt guilty that he had felt pain. Though there was no way he could have lived a life without her, it was perhaps the only way for her to be free from him. That was how she had consoled herself in the dark thoughts, when sobriety allowed for moments of clarity.

Karen is a professional, a performer, after he had died. She sang. The media reported on Dan’s death, the persona as a grieving widow had boosted her career. Ironic, the very thing that had killed him became a living epitaph to his death. The car going over the ledge, was an accident, his note and the arguments leading to the event were omitted from the wider world. Karen still had them, in a shoe box somewhere along with her wedding certificate.

It was then that she became a super star, adored and praised, a celebrity. She had become a queen, living in a mansion modelled on a castle that it turned out a nice man had died in a way to help make possible. The music was the only time that she felt happiness, money, possessions, toyboys and praise all were passing fancies. Empty ordeals.

“The worst thing about being on top of the world, is that you have far to fall”, Karen had finished removing the make up from her face. Beneath the diva’s veneer lay an old woman, poor skin and the decay of bad living eating into her being. Even her voice was heavier, she could not carry the notes as she once had, her hips ached and she slouched while standing on stage.

“An old woman with a broken voice” she repeated the lines that one critic had given her performance. She had never had a really bad review before then. Now any good review as an act of generosity, a fondness for an elderly act.

Dan had died a saint, a good man with all his skeletons buried with him. He likely had very few, as am man though she knew that he had had fantasies or thoughts that he kept from her. Dan smiled proudly as he stood alongside his young bride, she believed absolutely that was the happiest day of his life. Hers was when was won the first of many international awards, then they just became another performance, another night of costumes, make up and smiles for strangers.

For her worse than dying, was getting old. When the world looks the other way, when you go from being the star of the show to a nostalgic memory. A living relic of another era, to perform for old people who for a flicker of a song remember feeling young again. That is worse than dying. But Karen could never die, she was immortal now. Famous. Everyone had an opinion on her. Soon those clippings on the mirror would have another addition, her obituary. Then, she would for a moment be a star again. Until then, “The show must go on”.