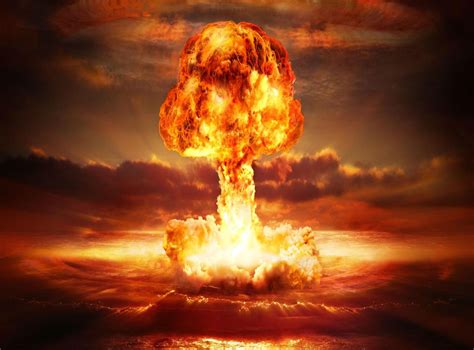 Just One Planet – We used to be scared of nuclear war

“Our most basic common link is that we all inhabit this planet. We all breathe the same air. We all cherish our children’s future. And we are all mortal.” John F Kennedy

There was a time when a lot of people feared nuclear war. The cold war was a delicate dance of destruction between two super powers, each armed with enough weapons that could obliterate the planet. Protest groups were active outside military bases and test sites, the anti-establishment energies were often focused on opposing the arms race and nuclear weapons. Even at the height of the cold war, when the empires rattled their atomic sabres, diplomacy and compromise prevailed. Reason and the dignity of human understanding ensured that the planet gained another tomorrow. Today it seems few take the threat seriously and the two biggest nuclear powers are not talking to one another.

The Cold War was full of popular culture and literature reminding the world about the dangers of nuclear annihilation. The concept of ‘Overkill’ was ever apparent, though to build more bombs and missiles was an addiction for the empires. Movies and television shows were made that depicted a sobering reality, the unwinnable nature of a nuclear exchange. Even Cold War warrior, Ronald Reagan was stunned by one such television movie focused on the days after the detonation of atomic weapons. Many environmentalists, anarchists, anti-government, anti-capitalists opposed the nukes and not all of them were paid shills of Moscow. It was a reaction of the sane minded in an insane world of think tanks and policy makers.

For the powers in the West a self righteous morality has arisen that ensures an aggression of supposed benevolence, well meaning warfare and economic deprivations that strengthen some nations and interests while harming others. The belief that preventive war, embargoes, assassinations and violations of human rights are allowable so long as it is the exceptional nations doing such things. And should other nations, those pariah, do similar then it is irredeemable. The hypocrisy is easy to point out but it is never felt or admitted. It’s either ignored or it is arrogantly not comprehended. What it has done is created a rift and a break down of diplomacy and the threat of war between nuclear armed nations.

In the absence of the Soviet Union, the United States, NATO and friends have found Hitlers all over the world, spectres of evil who apparently seek to conquer regions or destroy freedom. The threats may exist as abstracts such as terrorism and drugs to nations such as North Korea, Iran, Iraq, Syria, Libya and Afghanistan. Or in need to replace the Soviet Union at its peak, both Russia and China are imagined as great military super powers with global intentions to rule the world.

The brinkmanship of the cold war was an insanity that only the most educated and morally minded could bring the world close to, though it was never as cavalier and reckless as the sword dance that is occurring now. Fresh after the fall of Iraq and Afghanistan, the bloody blades of the United States and its allies push towards Russia and China. New lines in the sand are being drawn. Against the Chinese over Taiwan and with the Russians for the disputed territories in the Ukraine. The great outsider in its own strategic interests decides what is right for the world. Though the Chinese government has stated their policy repeatedly towards Taiwan and the Russian leadership has directly stated that it will use nuclear weapons in defence of certain territories. The jesters of Western imperial policy persist.

At the time of writing rumours abound about a possible coup in China, instability in an already economically fragile nation racked by terrible Covid policies and with diminishing foreign trade. It is very unlikely that any successor in Beijing wants, let alone can afford a war. China has grown thanks to its trade with the West. Russia has been pushed as an outsider for many years, even as it supplies Europe with gas. The West needs a Russia to exist as an antagonist, even if the Russians themselves only want to coexist. Russia justifies NATO expansion, NATO expansion provokes Russian belligerence and so we have a symbiosis of conflict.

The same question can be asked, is the Crimea worth plunging the planet into war, over another European conflict? Ignoring the antagonisms from 2014 onward that has led to the Russian invasion, is it worth the threat of nuclear conflict or even the introduction of NATO forces. The West is already sending scores of weapons, trainers and munitions to bolster the Ukrainian government. Many are profiting from the ongoing war, as humans die and suffer others throb with greed. The collectivist mentality has already determined that ALL Russians should be punished and are responsible for the deeds of their government, cast as the ever villain the narrative is set. Blame Russia, again, always.

The Russian invasion of the Ukraine is vulgar and wrong, innocent people are dying. The Chinese threats and bullying of Taiwan is wrong that does not ensure willing reunification. Those who are quick to point out the ills of the Chinese and Russian governments will eagerly ignore the same wrongs committed by the exceptional powers who have decades of war buried beneath their bloody boots. Governments are not good guys, warmongers are terrible human beings, escalating and spreading a local conflict into a global one harms more than it helps. It seems that many are protesting for war and intervention, to be against war some how makes one an apologist for Beijing or Moscow.

The protesters of past generations are not as rampant as they once were, the anti-establishment is now an establishment in itself. Defence companies are hard targets to picket, they after all provide jobs, pay taxes and donate to the right political types to ensure business as usual. The military is forever sacred, even for a lot of hippies it seems. Every Russian is a villain, the Chinese government genocidal, though is every Muslim still a terrorist? There was a time when scores of people stood outside US military bases protesting the presence of tactical nuclear weapons or when French commandos sunk the Greenpeace boat ‘Rainbow Warrior’ to stop the organisation from protesting a nuclear detonation in the Pacific. The cause against nuclear weapons and war was more acceptable.

Those who have forgotten about ISIS and who once claimed to support free speech after the Charlie Heb-do murders likely have Ukrainian flags on their social media accounts and call for the censorship of any Russian perspective on the war. The Middle East, just like South East Asia and the threat of communism are yesterdays crusade. That Assad used chemical weapons or that Qaddafi supplied his soldiers with Viagra to mass rape with are all moments that have passed the lexicon of Western importance. The consequences still remain for those in Libya, Syria and South East Asia. The West is almost free of any misery, besides the loss of military people and the injuries suffered by those who served, such war has not infected the opulent masses back home.

A war with China and/or Russia will not be so kind to those in the West. Hardship and catastrophe will be worse than inflation and shortages, it will disrupt the planet economically and physically. The pollution and toxic outcomes from a war on such a scale, even a non-nuclear one, will cause environmental catastrophes that are unimaginable. The burning oil fields of 1991, burn pits in Afghanistan and shattered cities of any strategic air campaign are the outcomes of a total war between mighty military powers. The pride and irrationality of statesmen, their military and those trained to kill will not stop until it’s too late. What would be gained?

Nuclear weapons as they exist are supposed to be a deterrent. They have not stopped war, in the years since the atom bombs devastated Hiroshima and Nagasaki and other nations detonated their own devices, peace has not reigned. Millions have been killed and murdered in wars and undeclared conflicts, many of which involved the nuclear powers. Outside of border clashes and minor ‘incidents’ the nuclear armed nations have not gone to war, yet. That perhaps is in itself a deterrent. Though would they ever have, in a post World War Two world. Would either side really want that type of total war again?

And here we are, watching with helpless interest. Business as usual between governments, the diplomats are less active as they should be. Unlike in the cold war, the communication is nearly impossible. And in a world of cancel culture and puritan absolutism, even to entertain compromise or dialogue with the other side is forbidden. The morally bankrupt and most zealot nationalists have the planet in a game of Russian roulette with nuclear weapons. More should be concerned, frightened and angry. Instead war apathy has taken over, the culture in the West is to always be at war now. It’s a given.

The spectre of a nuclear exchange is not entertained or even considered that much of a threat, it’s not like it’s as dangerous as climate change or even Covid-19. We only have one planet, why must it be at the mercy of governments and those who always seem to profit from war? But Nixon did after all go to China and Reagan did watch “The Day After”, motivating him to talk with the Soviets about lowering their weapons stockpiles. Perhaps Steve Gutenberg can help save the world again, we only have one and it is more fragile than we realise.

“The catastrophic events you have just witnessed are, in all likelihood, less severe than the destruction that would actually occur in the event of a full nuclear strike against the United States. It is hoped that the images of this film will inspire the nations of this earth, their peoples and leaders, to find the means to avert the fateful day. “ Ending disclaimer to the 1983 film “The Day After”.