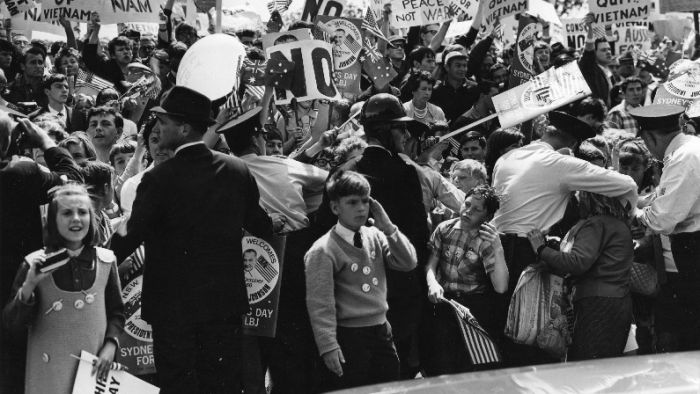 Some Aussie songs against the wars

Some Aussie Songs against the Wars!

Music can be powerful, at times possessing the ability to conjure emotion through lyrics and sound, achieving in a few minutes what an essay can fail at. The right song is the parcel of catchy brevity and lyrical poetry with meaning. Australia has a rich history of talented singers, writers and performers creating music that is unique to the sunburned continent. Australia also has a rebel culture rebel, hidden in plain sight. Founded by reluctant prisoners, enthusiastic adventurers and those escaping their birth land to call Aboriginal land their home. With a history of empire and defiance, the music can at times reflect this combination, none more than in the songs against war.

A Walk in The Light Green and Khe Sahn

Few songs express the sorrow felt by soldiers when they return as Redgum’s, “I was only 19.”

The journey of youth into maturity that war, lead vocalist and guitarist John Schumann wrote the song based on the experiences he had heard from veterans. The song is rich with slang familiar to those who served in Vietnam with the Australian army. The original title “A Walk in the Light Green”, refers to the shading on the map of vegetation density, light green meaning less vegetation but with a higher chance of contacts, dark green for the denser jungle. It’s a song for the diggers who fought in Vietnam. As a song it has become one that reflects on war itself, the futility and waste. It may be for the soldiers, in parts written by them it is also very much an anti-war tribute.

The lyrics to “I was only 19” unveils the realities faced by returned soldiers once ‘home’. The Vietnam war veterans found themselves as a forgotten bunch and the popularity of a song about them helped to raise a national awareness. Men who had been in war, a failed and now unpopular one, trying to cope and survive in a society that did not understand the physical and mental damage incurred had a musical advocate.

Cold Chisel’s break out hit was the song “Khe Sahn”, a catchy number about an Aussie soldier’s transition from war to civilian life, delving into addiction, trauma and bad relationships. Unlike Redgum’s take on the issues some veterans face, Chisel produced a more upbeat sounding rock anthem that marched into the 1980s. Though the lyrics when heard are depressing, perhaps go unnoticed despite its constant play on most Aussie radio stations even to this day.

Today PTSD is known, when “I was only 19” first was heard it was a dark secret, one of the tolls that war takes on those who fight it. The soldiers are often remembered and known, even those who suffer in painful silence. The civilians whose lands they visited remain forgotten, faceless props of history. PTSD, injury and death occurs for them, though rarely are songs about them. For Midnight Oil it would be their call to arms to sing about war and injustice the world over. Unlike Redgum’s folk sound for the soldiers, Peter Garret the front man for Midnight Oil produces an in your face rock to push the point.

The Midnight Oil song ‘Blossom and Blood’ begins with the famed soundbite from President Eisenhower’s ‘Military Industrial Complex’ speech. Musically an aggressive tribute to those lost and the impact war has on society and family, “You talk of times of peace for all. And then prepare for war.” A lyrical punch to the ears of war masters who lie and manipulate so that armies are filled with eager sons who die and kill. Other Midnight Oil songs such as “Forgotten Years”, “Put down that Weapon” and “No Man’s Land” are as powerful and listenable tunes against war.

For a nation like Australia there is a healthy distrust of the ‘Pom’ and ‘Yanks’, the awareness that we exist as their little brother in policy and conflict. Though any wariness of the big allies pales in comparison to the Australian fear of others. Australian history is marked by its eagerness to serve empire first the British and now the US. The Midnight Oil song, “US Forces”, is a criticism of US military interventions.

The Australian bush ballad, “Waltzing Matilda” lyrics were written by Banjo Patterson about a man down on his luck who is caught stealing sheep. Written during the depression of the 1890s, it’s a ‘battlers’ song. The spiritual anthem for white Australia, the uniting sound that when sung abroad raises a chorus of those who are missing their home Down Under. For soldiers fighting and serving abroad, it can be the sound of home. To invoke “Waltzing Matilda” in a song raises a sentiment that is unique to Australia. In his 1971 song, Eric Bogle did just that with “And the Band Played Waltzing Matilda”,about a young soldier who loses his legs in the Gallipoli Campaign during World War One. A battle that is more sacred in Australian history and lore than the Federation of the nation itself.

The battle of Gallipoli is a peak of Australian historical pride. A song about a young soldier who goes from a traveling young man in Australia to one of the many ANZACs fighting at Gallipoli is a powerful and tragic one. Many singers have done versions of “And the Band Played Waltzing Matilda”, though the original rings with a sadness, a tragedy that only war can bring to not just a man who loses his legs but to a nation mourning men lost in a war fighting for an empire that view them as disposable. In its remembrance of the courage and sacrifice of its soldiers, Australians tend to forget or perhaps ignore the futility and sacrifice of their warriors disposed of with little regard by imperial masters in war.

The sadness of Bogle’s songs pace lends itself for remembrance ceremonies. Though remembrance should be about reflection as well. Why must Australians always go abroad to fight, from the days of Breaker Morant fighting the Boers to the age of Ben Roberts-Smith in Afghanistan? The weeping lyrics layered with ‘Waltzing Matilda’ resonate to this day though the deployments may differ and technology has changed, young soldiers losing limbs and suffering from the trauma of war remains.

Before his reputation was tarnished, Rolf Harris was an Aussie icon. His version of the 1902 American song by Morse and Madden is a tender rendition. Refereeing to an incident during the Boer War, two Aussie servicemen rode an Australian horse together to escape an ambush, leaping barbed wire and avoiding incoming fire, the men and horse surviving. The lyrics humanize the incident, telling a story of innocence of youth into mateship under fire. That Aussie take on friendship, a key component to the Australian warriors mythos.

The imagery of two boyhood friends, maturing and fighting in a war together is romantically tragic. Though an occurrence that has often ruined lives, a right of passage that can lead to loss and pain for those who must endure it. The lyrics for “Two Little Boys” captures that combination. Just as the band 1927’s song “Compulsory Hero” begins with two boys playing, “Remember the times when when we were kids, playing war games in your yard, everybody had to be a hero, and get one in the heart.” The song goes on to invoke the generation call to serve, “its war without choice”, leaving home for a place where all they do is try to make it home alive. Normie Rowe, when doing a cover, drew from his own years of service as a conscript fighting in Vietnam giving us a song of heartfelt truth.

It is assumed for nations chronically at war that young men are to to be grown to someday fight abroad, the call to arms is a duty that one must endure in order to be both a man and patriot. A vile lie that convinces men to fight, the belief that they are defending their kin from distant threats, protecting and ensuring freedom. Rather, they serve a government that invests their blood into its own self interest, the salesmanship is in convincing the warriors, that imperial wars are a righteous cause. Always for a good, until the end and afterwards when the warriors are abandoned. These two songs share that boyish eagerness, the youthful innocence that can convert boys to men of war, and the sad afterwards.

The original war fought by Australians is often forgotten. It is a cliché to say that histroy is written by the victor, in some ways so too are the songs, at least by the “victorious” culture. The band Yothu Tundi in 1991 came out with the hit “Treaty”, about the two Australia’s. It’s a song that is catchy and very Australian while also being one that protests political lies that layer over a culture that exists while not-existing. For much of Aboriginal Australia, history is a tapestry of traditional stories and those that are infected by a national narrative which apparently began in 1788, when imperialism arrived. “Treaty” is a song that is in someways anti-war but also a call to peaceful arms, a defiance against betrayal and a voice for the marginalised. It’s the song sung by those whose ancestors lost a war that they did not seek, the voice of of the other side of a settler colonial nation. The unpopular voice, even if for a little while a song or the culture itself is in vogue.

One needs not be anti-digger to be anti-war, it’s after all in keeping the soldiers home and not subjecting them to the misery of war that one can support soldiers. Though like most anti-war media it is conflated with a hatred of all things that most take pride in, national identity and soldiers. The only time that songs protesting war generally become acceptable is when it’s too late, when a war has run its course, the dead have been piling up long enough for the public to care and the maimed return home in such numbers that it’s no longer possible to ignore. To be Anti-War suddenly becomes ‘pop’, some music will tenderly dance between tragedy and courage while celebrating the soldiers, without calling out the war itself. The lyrics about suffering, loss, death and destruction is the call out. Tears of the survivors is the rebels chorus that came too late to be heard by the dead.

Few musicians will go all out, in the fringes they exist and always will. To be at the top of the charts, it takes nuance and delicate writing and timing to ensure such a thing for a rebels chorus, the weight of the public needs to be on the songs side. The tragedy is that war, despite all of its terrible outcomes and most peoples claims otherwise, is popular. It’s a collectively understood, ‘necessity’. Another obligation in the splitting between evils that societies generally calculate at the expense of others. Songs against wars push back against this notion, to be antiwar is punk. Australians have many talents and some of its musicians are rock stars for peace.