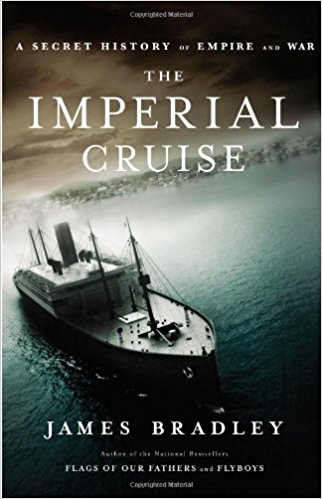 The Imperial Cruise: A Secret History of Empire and War by James D. Bradley

This is a book that perhaps comes into the category of “revisionist history,” not because Bradley invents some obscure series of events or manipulates facts in a manner to convince the reader to adopt an ideologically flavored balloon of crud. It is “revisionist” because it merely presents many of the facts and indulges in horrible admissions and not the important omissions that are integral in popular history.

The standard history that many of us are fed is based upon the romantic illusions of the great man in time. Those iconic figures who stood taller than their peers and led society, culture or nation through troubling times and into a greatness of legacy. This is a book that looks mostly at one of those great men in History, Teddy Roosevelt and how much of what we “know” about him was a myth that he, himself invented.

James Bradley is most famous for his book The Flags of our Fathers which went to be made into two films. One showing the Japanese perspective during the battle of Okinawa and the biography about the iconic moment frozen inside history of the U.S. Marines who raised old glory upon the volcanic rock. This book was in many ways jingoistic and helped to secure the pride of American glory, especially during World War Two. This book does not unveil such feelings. It was written as part of the authors process to ask the important, why? Why did the American and Japanese empire come to bitter and bloody heads in the middle twentieth century?

Bradley perhaps indulges a little too much on the cruise that seems to be the personified focus of much of his book. It is in doing so that his narrative at times becomes sickly and over enforced. The voyage of American political royalty across the ocean and into the Asia”s is one of interest and note but it is not the absolute depiction of American imperialism. It is merely symbolic. Perhaps in this book too symbolic.

The book looks at the American attitudes and conduct in Asia from its opening salvos inside a Japanese harbor where they sought to open the isolated islands to American dominated, Western trade. On to the occupation and racially derogatory treatment of non-whites (non-Aryans) in Hawaii, China and the Philippines. Though a brief book it explores Anglo-American attitudes to colonialism and civilizing the “barbaric” parts of the world. The extension of manifest destiny, all the way across into the Pacific.

It is here that the book exhibits strength, it uses the condemning words alongside the brutal actions of the common American right up to the great elites of leadership. Whether it is in depicting the people of the Philippines as being backward dog eating pacific Negroes, or the China man as an unwashed barbarian to heralding the “Jap” as an honorary Aryan the history of US conduct and policy in Asia is despicable and dangerously self-serving. A history that many Americans omit from their memories. Many Asians have not.

The book looks to show how President Teddy Roosevelt and some of the players from his era helped to set in motion the inevitability of a war between the U.S.A. and Japan. It shows with evidence that the U.S. along with other Western Imperial powers helped to build Japan up as both a bulwark against the Russian Empire and as a reliable player inside the Asia Pacific region. A local friend to be embraced among the other Asian nations.

In doing so the US in many ways created a future enemy. An enemy that would grow to resent the West for its hypocrisy and double standards. An enemy that early on was cultivated to occupy Korea, assisted in snubbing China, which helped to quell the nationalistic Chinese boxers, that defeated the Russian military in a fight over Korea and who with an American attitude assumed its own “Monroe Doctrine” inside of Asia.

To lay the blame at the United States and the West is not an entirely fair conclusion, blowback certainly occurred, but the Japanese who went on to rape, pillage and murder much of Asia, most notably in China are responsible for their own terrible conduct. They do so for their own nefarious reasons. Perhaps they learned to do this or perhaps they did so regardless of those who inspired them into a form of chauvinistic militant aggression. One thing that is not uncertain is the fact that during the late 19th Century, the Japanese were encouraged to adopt Western views regarding racial supremacy and colonial imperialism.

Regardless the Japanese actors in those vulgar moments in time are personally responsible just as much as the Americans and other Westerners are for conducting so brutally with savage self-righteousness terrible and murderous violence throughout Asia and much of the World. But we know of the Japanese imperial crimes, the horrible rape of Nanjing, the comfort women and the mistreatment of those captured. History tells us often about the miserable experiences of those beneath Japanese occupation, the ritualistic beheadings, the impaling of child and mother alike, the sexual torture for Empire. These disgusting acts cannot be blamed on any other, other than those individuals responsible and their Imperial rulers for enabling them.

Many however do not care to know about the American crimes, the horrible occupation and war in the Philippines. A campaign of genocidal misery that cannot be glossed over or glorified, it simply was savage and yet at the time and in the decades after it was accepted as being an Imperial right. How superior races and nations treated those beneath them. Whether they be Indians beneath British rule, Namibians under the German or the Congolese under Belgian rule, it was how colonial lessers were treated by their civilized masters. The American rulers of the Philippines were no different in their brutal colonies.

The legacy however does not waft away for those who experienced it. Though the history and text books ink may omit such bloody pain and suffering, the crimson darkness of the dead does not wash away so cleanly for the generations who grew up listening to the survivors and those who suffered. Just because a national narrative suits a gloriously romantic past, it does not make peace with the bones of its victims. Bradley attempts to relay this point, though at times his message is distracted by biographical speculation of Taft, Roosevelt and their familiars.

So, while this book does seek to hammer its point across, it should. If reading about a nations conduct and actions during an apparently glorious period of history is uncomfortable because it upsets your views, then that is an indictment on yourself. For those who wish to gain information about history, real and non-romantically narrated history then this is a book for you.