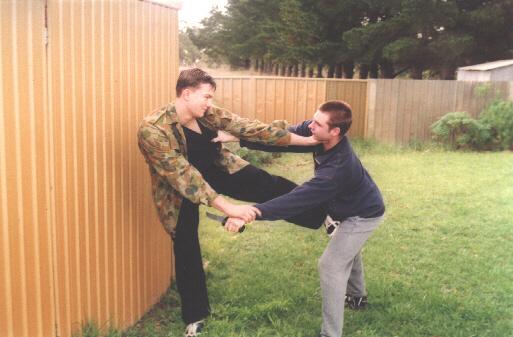 Dogmatic deceptions of self defence

Violence is a fluid and erratic relationship between the actors of such moments. It is about the initiator and reactor, the many or couple that are engaged in this conduct. Dogmatism and doctrinal beliefs are created as a safeguard for the ego and the inexperienced. They are naïve shields invented to best wish away the horrible potentials that lurk beyond.

Because of the splendidness of such dogmatic beliefs they go down the path of misguidedness in a few different ways. One is that they form comfortable activities or hobbies for people to indulge in long ago losing any real objective purpose or relationship to actual violence. Two, they invent theories of misconception for inexperienced cowards to either exploit the ignorant with. This is done with professions of training and claims that are never backed up. It is done to elevate one’s social status while also gaining material benefits. Three, the other is from sincere naivety. It is all that is available for those who desperately need truth. It is the only glimmer of potential reprieve for those that seek an answer.

The courageous student is the one that can realise that these dogmatic martial arts or approaches to unpredictable violence are meaningless bunk and ultimately counter effective. The lie that some knowledge or a little bit of training is better than none is dangerously incorrect. Often the student has trained away physical instincts, learned methods that are so terrible in application that they are almost injurious in repetitive practice let alone when deployed in conflict. The other reason is that some training in a misguided doctrine helps to foster a belief. This belief can then flourish into a deadly assumption which will do nothing to help prepare the student should actual conflict arises. Worse this belief can lead them into a false sense of wandering as the calamity of conflict arises.

It is never an easy thing to propose to a physically and mentally ill prepared individual for the realities of life or death conflict. The change in mind-set alone is confronting and something that does not relate to modern culture in most societies. The physical training needed is also hard in that it requires diligence and honesty while also addressing the bluntness of conditioning. Often it is assumed that one can ‘fitness’ their way out of conflict and while this may be the case on occasion, the methods and attributes that one gains from generic exercise regimes is counter intuitive when it comes to dealing with a physically powerful violent predator. Not to mention the emphasis on isolation of muscle groups versus relative needs of kinetic linkage is in complete conflict when under real world stress.

The reality is that a lot of drills, role play and feeling positions-scenarios is one of the surest ways in preparing a student for conflict. Merely deceiving them by playing one steps, repeating forms or grinding cookie cut techniques over and over again is one of dangerous deception. While also assuming that a sport orientated system will cross over absolutely to self-preservation despite the non-sport variables that one may encounter in the ‘real world’, is also dangerous and has harmed many living systems like BJJ. However, living the methods and training of many combat sports may be, an inability to truly adapt them to real combat can create a true deficit and in itself become dogmatic as far as the training goes.

Off handed delivery of clichés over and over is no safe guard to success in objective training nor is it effective coaching. By saying lazily ‘go hard or go home’, ‘sweat is pain leaving the body’, ‘chin down and hands up’ or ‘go for the balls’ are simplistic verbal slogans that lack implementation or contextual reality see the practioneer and ‘instructor’ wrapping regimes and concepts around these clichés with dogmatism and beliefs of sheer naivety. As though reciting mantras is enough when it comes to finding truth or solving problems. The assumption that hard training will equal success without the honesty of intelligence and skill is so very simplistic but ultimately alluring because hard work is actually easy. Complex puzzles and for ever moving targets require both thought and living adaption, which is very frustrating and hard.

The greatest crime of this nature is in the faith placed in those that deceive so openly. The willingness to be deceived and the obedient lusts of the students for the instructors who have merely taken it upon themselves to invent a persona of a sea faring mariner from the dry dock. Never once braving the seas let alone understanding the mysteries of the great oceans, instead they polish a barstool of arrogance and are fondly loved for it. It is both shameful and disgusting on both the instructors and students part. The only intelligence displayed is by the forever con artist safe in their societal pulpits as we in the end applaud the expert despite their inexperience. This is a fault of the one adoring and employing these liars. True justice would see them exposed for what they are, and inviting them to display these dogmatic regimes of willing exploitation in real combat. But alas we do not live in a world where examples and evidence are required, instead self-validation and papered certification are all that is needed when it comes to material and cultural praise.

Don’t deceive or be deceived. The truth is less than appealing and training for actual combat opens you up to more questions than answers, that is the splendid thing about training is you are always evolving and adapting to answer these frightening forever questions. Dogmatism assumes the answer to dead questions, whereby one never moves nor grows and instead is lost in a place of comfortable naivety. Reality does not wait.