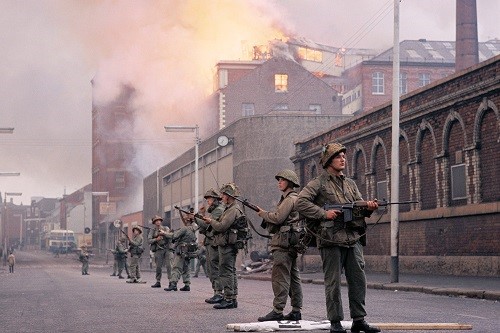 The Vulgar violence of a polite society

Violence, it excites as much as it frightens just as it attracts as much as it deters.  It is not merely human, it is nature itself.  The mechanization and institutionalization of violence are however perfectly human, beyond the crude savagery of the wild. Humanity with its ingenuity and at times arrogant self-importance has managed to romance and deify violence to such a status that is often heralded. Humanity has professionalized it, industrialized it, given it endless mandates, upheld it as a virtue so long as obeys a collective context.  The passion or carnivorous desires of murder are abstracts of esoteric greatness to be honored and worshiped.  The dead victims of the righteous and moral violence of a great society are nothing, inconsequential to the heroism of the killers and the martyrs of conflict.

It is not in the fictional fantasies of film, books or computer games that violence finds a sacred place.  It is in the abstract collective ideals of human history and governance, where the nation and tribe look to the past that often never was for its heroes and inspiring guidance.  It is in the collective notion of such violence that brutal destruction of thousands of lives can so easily be sought, so long as the reasons and ideals are romantically conjured.  It is a society of polite manners and decorum that allows elite, scholar and nobility alike to run their verbal hands across a map with a swift swipe and declare that there within all shall die, however suddenly or slowly so long as a notion or valued reason sought.  The polite of society pays its proxies to do this for them, heralded soldiers and enforcers who do so with brutality beyond the echo chambers of media and academia. These killer proxies do with professional brutality what the elites and obedient of the polite society cannot stand to imagine, let alone bear any witness to.  Instead, it is done with blissful ignorance and with the air of poetic valor.  They are brave, heroic and crucial to freedom, the vanguard for a polite society of manners and standards.

Yet, those individuals who walk among the socially polite ranks of the blood lusting nations who with an individual readiness for violence are often looked at as being strange or themselves dangerous.  Should one with no malicious actions of their own, diligently prepare for combat and proclaim so among their familiars their mental readiness to destroy any element that sought to harm a loved one, a chill and upsurge of discomfort often emerge.  The socially polite bulk at the vulgar words that edge with physical purpose, but chew down popcorn as the flicker of animated fiction emulates the righteous violence of romanced history.  They are as barbaric and unrefined as the crude athlete or prize fighter who perpetuates a social violence that is unwanted and beyond the scruples of a polite society. The consensual violence of sport or even the prepared individual of self-defense are improper reminders of the world beyond the walls of manners.

The socially polite beings celebrate laws and acts that lead to the misery of millions.  They can so easily relegate an entire theology to pariah status, condemned a region to perpetual occupation or excitedly drool at the idea of blasting to pieces the cities of millions of strangers.  This is after all academic conversation had by those who are in touch with the policies and histories of their great nations.  An elitist assurance exists from within the arrogant chauvinism, whatever tribal identifier may be.  Ideology, Theology, Nationalism, Race and so on are all proud banners to drape oneself among.  But the swinging fists of intimate self-preservation is crude and horrible. The individual engaging in seldom deadly violence is a brute and uncivilized. Civilized is the mass destruction of one hundred thousand beneath so many bombs, via crippling embargoes or with chemical agents.  Fisticuffs is unrefined savagery.
Whether the debates are held over the dinner tables, upon the stage of election politics or from within the academic towers of importance, it does not matter.  One is safe to proclaim the heroism of their own militaries, to uphold the valiant purity of one’s national warriors before the foreign inferiors.  Those that dared to oppose ‘us’ in the past could not suffer enough atomic bombs, let alone drone strikes or carpet bombing raids.  They in some calculated way started the wars and ‘we’ merely finished it. Even if they never did actually start anything, they, the enemy and their innocents, bought the fury upon themselves.  This is socially polite to conclude, it is after all common knowledge, an accepted truth.

To sit among these ranks, whether they are loved ones or apparent social betters one cannot help to find a disgust at the blood that drips from their tongues as they so arrogantly collectivize millions of human individuals as being one globulous mass of dangerous non-humans.  Their babies apparently are just a decade or so short of being like their parents, murderous and untrustworthy, the proclamations fall short of genocide or the call for all-out extermination. Yet they yearn for the misery and death of so many strangers. To cross the ocean and bludgeon a terrorist to death themselves would be reserved only to rhetoric, to suggest that they kill the ‘terrorists’ family with their own bare hands would be over the top and crude.  Yet, when they vote and when they discuss among polite familiars they cheer for those babies bloodied bodies, except they hide it beneath proper language, the proxies do the killing, they simply participate in the paying and condoning.

And while among these very same socially polite individuals should one propose an intimate scenario, one more likely than the threat posed by far away distant strangers.  Should one suppose that a deranged man entered the room, wielding a bloody machete and intent on hacking all to pieces, one would be inviting an uncomfortable thought.  If one was merely to ask, what would you do?  The question would then cause a stir of cerebral cowardice or at best deceptive bluster.  Whereupon in most cases, the realization is that they would not know what do to.  They have no abilities, arms at hand and those they hold faith in to protect them are not present and will not be until well after the violence.  The polite would change the subject or at best ignore the question.  The paid proxies would stop the deranged killer, apparently.

And when one capable can honestly answer with cold truth that they would attack that machete-wielding person in the scenario, using experience and purity of objectivity one proclaims that they would destroy them, liquefy them with bare hands and ensure that they never harmed another being again.  The room would fall awkwardly cold and the conversation should end.  The suggestion of intimate violence is puerile and violent. It is disgusting to create a realistic depiction to force these socially polite beings to conjure up their own uselessness at their self-preservation. And should one ask, what would you wish to do to the deranged killer that did such horrible violence to those dear to you in your absence? Would you seek revenge? Or again would you beg for the paid proxies to avenge the dead. Harsh questions, not to be asked from within polite company.

But the conversation for proxy murder, the intellectual delight in pretending to be tough at the expense of others as paid killers do so with their blessing is supposedly virtuous.  It is easy to call for the blood of others babies, to yearn for the destruction of others homelands when they are faceless and distant, alien in culture and belief.  It is empowering to discuss the swift violence that should supposedly befall upon these strangers because they are at war with ‘us’. Somehow, however, far away that they are, they pose a threat to us all, to our civilization. Alien, Oriental, Backwards, Barbaric, Uncivilised and Foreign, they must be stopped, contained and exterminated. If not at the very least converted and changed so that they are better, more like us.

But when the violence is close to home, most likely from a cultural and racial similar, it is frightening and impolite.  Those so steeled with their collective histories lack the courage and ability to do what is right in those desperate moments that may arise.  It shows both cowardice and cerebral failure, a masturbatory delight at the destruction of others but a limp impotence in one’s own personal self-defence.  The sacred belief in the third-party monopoly of protectors or the naïve trust that all beings will obey the law ensures an infantile trust that violence is for others to experience and not for themselves, not for any of us.

So, next time you or those around you delight in the deaths of distant humans, when they call for the bombing of others because they are linked to ‘terror’ or look back at the great murders in history, known as war, and gladly indulge in the death of millions as though those living in the past were toy figurines upon a child’s floor.  Ask them calmly what would they do if the violence found them, would their academic pride for proxy killing suddenly snuff away as their faux masculinity diminished beneath the reality of truth.  While few may answer that they would act.  Many, if not most would either lie or cry inside.  Heroic intellectuals tend to make pathetically weak humans in moments of desperation when others need them to act and to be brave.  If the imagination of a machete-armed man hacking party guests is hard to conceive then what about the sudden explosion of a detonating missile tearing loved ones to bits at a wedding party, fired from an unseen drone or an armada of large aircraft dropping tons of steel and explosives onto your childhood home and the city full of all those that you know, the liquid burning misery of napalm consuming everything precious to you spread from an exploding steel egg dropped by a fast moving jet or the trampling of boots stepping over your possessions, gloved hands tearing apart your life as gun barrels jam into your face and wide-eyed professionals scream at you with fingers embracing their triggers.  What would you do? What could you do?

It is easy to imagine the powerful righteousness one feels when the mechanized violence of technology and profession represent you and your society when it is you who hold the leash to the beasts of war as a proxy master.  But if it were you and your loved ones suffering beneath the beast’s teeth and jaws.  Beneath the manners and neatness of society lurks a bestial heart for violence with a very human mind.  In some ways and perhaps in many ways, the wars are yours. They are all of ours. The violence is all of us. You pay for it, you get it. You sanction it, you condone it, you in many cases even praise it. And should those most precious in life to you are broken and in pieces falling away through your trembling fingers, remember this is the true outcome of polite violence, it is what you and your peers often sought and called for. So enjoy it for what it really is. Terrifying and fucking Horrible.