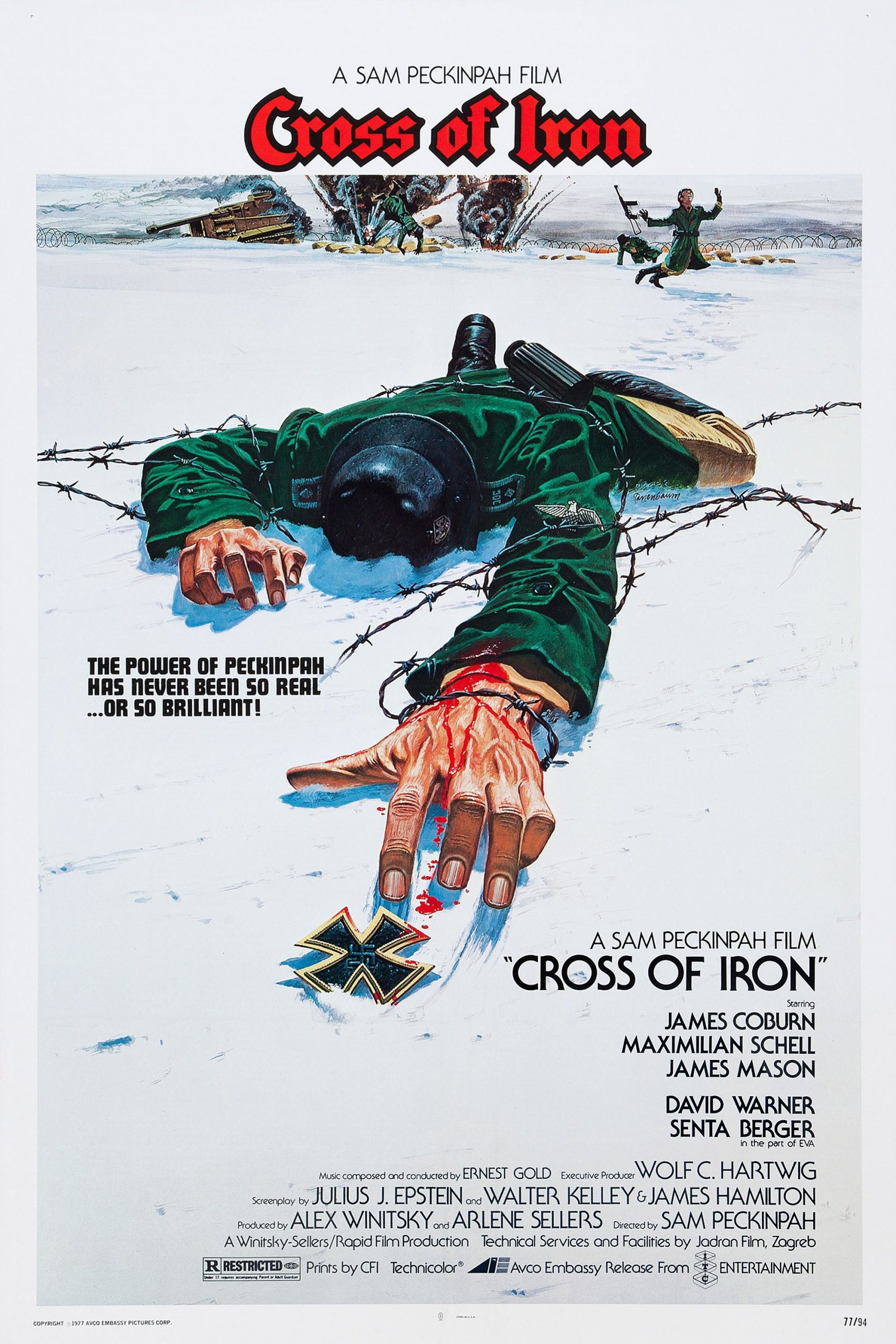 War as Directed by Sam Peckinpah

War movies have been popular since the early days of motion picture, often as means of propaganda, to stir contemporary emotions, depicting brave warriors of nation or faith locked in battle. War is a popular setting for story tellers, a stage for heroes and villains, the destruction and death is as much a prop as it can be a fellow character. Alongside the romantic war movies, some with an anti-war message emerged. In the 1960s and 70s, American film writer-director Sam Peckinpah gave us the misery of war with his own particular touch, specifically with ‘The Wild Bunch’ and ‘Cross of Iron’.

There is a unique method to a Peckinpah film, slow motion that captures the violence and gore of death and destruction, followed by sudden rapidity encased in sound, with close ups on an actor, grit and determination to terror and pain. The viewer is shown the violence and its consequence. It is disorderly structure, exciting, perverse and once it has been digested, those characters that survive go on and we will experience it again. The essence is for the viewer to know imperfect characters, to empathise and despise them as we accompany them. It is in knowing the human being inside the action and on the cinemascape that the viewer can share in the horror and action, whether via self insertion or as a voyeur.

The End to the Wild West

‘The Wild Bunch’ is set in 1913, long after what many would consider the prime period fir the wild west. About a gang of veteran outlaws that head to Mexico for one last job, the Wild Bunch redemption is in who their enemy becomes in the final showdown. A corrupt military led by a Mexican general that rules over a small town, much like ‘the Magnificent Seven’ it is a film about a few that take on a superior bully. The films climax is of brutal cinematic majesty, a violent shootout, it is warfare all the same.

Peckinpah had made several other Westerns, each hitting the standard tropes of the genre though his often depicted regret in his characters. A human complexity that can be found in reality, especially during war. The wild west after all was a war, one between the civilised and the supposed savages, individuals resisting a conforming society and even that as fought between nations. “The Wild Bunch” begins with the protagonists dressed as US Army soldiers, on their way to rob a bank. A former gang member is hiding above in a rooftop with a thuggish pose, below the towns people go about their day. The protagonists help an old lady cross the street, they are polite and friendly. Once inside the bank they become ruthless, determined.

Once the shootout commences the Wild Bunch and the posse exchange bullets, the townsfolk are insignificant cover or objects that now scatter the battlefield. Life and death is instant or painfully slow in a Peckinpah film, he reminds the viewer that violence is unpleasant. The films heroes are not nice men, just men who are surviving, filled with regret and isolated outside of their own company. Those killing one another have more in common than the civilians around them. Peckinpah takes effort to depict the cruelty of the world, as children torment scorpions and ants oblivious to the violence between men nearby.

Unlike other Westerns, ‘The Wild Bunch’ does not romance the outlaw or the frontiers that by 1913 have dwindled away. Classic repeater rifles and six shooters are matched by Maxim machine guns, Mauser bolt action rifles and Colt automatic pistols, in a mesh of genres. Peckinpah claimed that he wanted the audience to know what it was like “to be gunned down”. So the sound effects and squibs needed to seem consequential. What Peckinpah shows is bloody and explicit, perhaps indulgent in moments.

The film ends in a dusty shootout between relics of the wild west and Mexican soldiers, frontier madness. A year after the films setting, in civilised Europe, millions of men would go to war for their imperial masters in one of the most gory and destructive conflicts of human history. Not even Peckinpah could write such madness of human tragedy sparked by a 19year old murdering an elderly married couple that would lead to the death of millions. Films tend to need to make sense, reality not so much.

In the final battle. William Holden as Pike mans a captured machine gun, killing many Mexican soldiers. He in turn is shot by a boy soldier, rushing to his aid is Dutch played by Ernest Borgnine, with six shooters in hand only to also be gunned down by the Mexican soldiers. Both men collapse in blood, in desperate slow motion.

The film ends with the viewer seeing each of the now dead Wild Bunch in scenes from earlier in the film, each laughing in those lighter moments. The films men, fragile and courageous, adventurers that shared a bond. Now dead. When the film was made, 1969, thousands of men were fighting in South East Asia. The exception was that the Wild Bunch fought for themselves, feral relics against the army of a nation state. Perhaps in modern times they would be called terrorists, insurgents or militants, though when it is red blooded Americans fighting as outlaws, such terms are seemingly misplaced.

Above all it is a film about honour and the stubbornness of men who abide by a code, even in a complicated world that has no place for such nobility. Though outlaws and vestiges of the prime era wild west villains, the men that make up “The Wild Bunch” are honourable and loyal. Dedicated to each other, brothers in a place where nature and man want them dead. All they have is each other and that is what underlines their courage and will. As most soldiers do, they fight for the fellow that they laugh with and sleep alongside, the abstracts beyond the battlefield are distant. After taking that final walk into certain death, the outlaws die bravely as soldiers.

In 1977 Peckinpah directed “Cross of Iron” a world war two film shown from the side of German soldiers trapped on the Eastern Front in 1943. Based on Willi Henrich’s book “The Willing Flesh” it steers away from the source material in a lot of areas, as an audio-visual story that only Peckinpah could lead. The films setting is a horrible lived in reality, mortar fire, mud, unclean conditions and bullets. James Coburn plays “Steiner”, a veteran soldier and leader of grisly men who have no love for their Nazi masters. The soldiers have more in common with their opposite number, despite the brutal fighting, than they do their governments. Soldiers conscripted to fight for an ideology that they perhaps neither understand or even like, yet the soldiers are ever crucial for its survival.

The film starts with the black and white reels of Nazi propaganda footage, children sing in optimistic and patriotic notes until eventually the promise of a statist Germanic Utopia is interspersed with the grime realities of war. The film changes to colour as we see the platoon of protagonists in a forest, inter cut with images of Hitler and his devoted parading in gaudy uniforms with regalia and flags proudly raised. Soon we see our heroes snuffing out Soviet sentries, with knife, garrote and bare hands. The protagonists are men of deadly deed, like the Wild Bunch they know the craft of killing and though they do not do it for loot, Steiners platoon kill for survival.

“Cross of Iron” interjects the violent action scenes the films characters discussing ideology and philosophy. Maximilian Schell as Captain Stransky, an aristocratic Prussian officer who is neither Nazi or the common man, buttsheads with Steiner and despite his class, and rank Stransky is envious of his subordinate. Steiner had previously won the Iron Cross, a medal for bravery, saving lives while under fire. Stransky wants such a medal so that he may return home to his family, proud and proven as a man. To Steiner it is a meaningless and worthless piece of metal, to Stransky it is the reason he requested transfer from a lavish posting in Paris to the trenches of the Eastern Front.

Early on Steiner and his platoon capture a Soviet boy soldier and despite orders to murder all prisoners, they keep him fed, clothed and hidden. The boy is the face of innocence along with recent arrival, teenage soldier Dietz. Boy soldiers thrown alongside the old men of war. Steiner attempts to set free the boy prisoner who is gunned down by his fellow Soviets, moments later a battle erupts. Steiner is wounded. The likeable young platoon Lt. Meyer is killed leading a counter attack. Afterwards Stransky attempts to claim credit for the actions of Meyer, naming Steiner as one of his witnesses. Steiner does not lend his support.

James Mason is Colonel Brandt with his unhealthy adjutant Captain Kiesel played by David Warner, both officers are pragmatic and sympathetic to Steiner. In another attack Steiner and his platoon find themselves behind enemy lines, Stranky sacrificing them to the Soviets. While behind enemy lines Steiner and his men come across Russian female soldiers, where the romantically naive Dietz allows himself to be stabbed and a brute of a man loses his genitals while attempting to rape another. Steiner leaves the women, along with his wounded soldier.

Returning to their lines most of Steiner’s men are gunned down by Stransky’s aid, Lt. Triebig. Who in turn is killed by Steiner and his survivors. Moments before his death, Triebig insists that he was ordered to do so. Among the madness of war, Steiner leaves the survivors of his platoon to lead Stransky into battle. “I will show you how a true Prussian officer fights”, Stransky promises to which Steiner replies, “Then I will show you, where the Iron Crosses grow.” While convalescing Steiner had fallen in love with a nurse, he left her to return to the front lines to be with his men. A woman’s love is now a distant feeling for Steiner who returns to battle alongside a man who he hates, fighting alongside each other.

Despite their deep conversations and intellectual sparring the men in the film are killers. They may hold a variety of beliefs as individuals that condemn the Nazi ideology, they serve and kill for it. As men they may debate class and nobility, yet fight and die as equals when under attack. In the moments before carnage and the collectivist brutality of warfare, the men in ‘Cross of Iron’ quote Clausewitz and Bernhardi with sarcasm and discuss the morality of homosexuality but it is their deeds that exhibit their true character. To kill for masters that they admit to hating and fight a war that they do not believe in, and should the cameras transport across the battlefield into the Soviet camp we may find men of similar contradiction.

War is not glorious, Peckinpah wants us to know this. To witness violence with an uncomfortable indulgence, is a reminder that a beast resides inside of us all. Peckinpah wants us to love horrible men, to share with them and to bear witness to their deeds. To even cheer for them. In fiction this is uncomfortable to admit but in life it is done without thought. Peckinpah gives us intimate glimpses in his stories, helps us to understand that the goodies do evil and bad men have reason, unlike romantic films, it is complicated. Many of us view the real world with a romanced simplicity, ignoring the vulgar nuances of war and violence. It is how the process to war is often repeated. War has far too many sequels and we know they never get better over time.

“Do not rejoice in his defeat, you men. For though the world has stood up and stopped the bastard, the bitch that bore him is in heat again. “ Bertolt Brecht