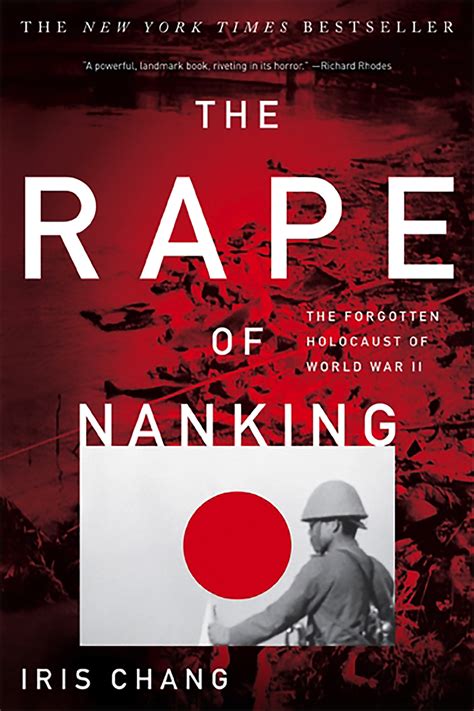 Iris Chang’s ‘The Rape of Nanking’

The Japanese empire was violent and brutal, the event known as ‘the Rape of Nanking’ is a water mark for such imperial savagery. It was a genocide and rape frenzy committed against the Chinese populace, an example nationalism, imperialism and acts of extreme savagery. The Chinese government abandoned the people of the city, the international community watched on in impotent horror while a proud Japanese military conducted itself with dishonour. Individuals with courage defied gangs of Japanese soldiers, exhibiting bravery and moral dignity. Iris Chang in her book ‘The Rape of Nanking’ concentrates on the eight weeks of terror which in 1937 took the lives of hundreds of thousands.

Iris Chang faced academic criticism along with hate mail once ‘The Rape of Nanking’ was published in 1997. The aggressive critics did not offer credible refutation to her conclusions and what she presented in her book. It was widely known that the Japanese government had committed atrocities during its imperial phase, the months of misery that it spent terrorising civilians and prisoners of wars in Nanking was known at the time. The true extent and details of which had never been properly recorded, until the ‘The Rape of Nanking’ was published. Nationalists from Japan immediately attacked Chang, no shame expressed only the hatred of the bias desperate to protect the legacy of an ugly empire.

Many of the sources in the book came from eye witness accounts, including those who had survived rape and maiming. Not to mention a series of confessions from Japanese soldiers who expressed regret after the ejaculation of defeat had allowed remorse to sober their minds. Contemporary news pieces also helped to contributed to her research along with evidence in the many unmarked graves.

It was a crime scene of such a magnitude that only a government could commit. It was a crime scene so terrible that it required thousands of willing participants, each using the uniform that they wore as a shield from any moral culpability. A crime scene where Japanese soldiers used their penis and bayonet with such painful and deadly ferocity against babies to the elderly while boasting a Bushido code of honour. It was one of the many crimes against humanity that 20th century governments inflicted on the World and its innocent. In her book Chang compiled the evidence against the criminals of Nanking.

Outside of Japan many know that the Japanese empire was terrible. It was marked with savagery and acts of cowardly violence against the unarmed and innocent. Many inside of Japan, barely know the details of the savagery that their government committed. They understand that they were defeated, the fire bombings and atomic devastation was a punishment for such. That bad things were done by some people of the empire, the details and scale are often omitted. This is the purview of all governments, especially those from cultures steeped in pride. Iris Chang’s book is cold water down the spine of Japanese nationalists who cling to the romantic delusions of a better time. A better time for their ancestors perhaps, not for their victims.

Chang captures the many human stories of courage from a humanitarian Nazi, John Rabe who used his status and position to protect and shelter Chinese civilians from the savage clutches of the Japanese soldiers. At times risking his own life as he stood between armed Japanese soldiers and the innocent prey that they were seeking to defile and murder. The Westerners who bore witness to the savagery, reported upon it and did their best to save as many lives that they could. Along with approximately 20 foreigners who managed to rescue as many as 200,000 Chinese from the Japanese military.

The book covers the military incompetence of the Chinese army that led to the sacrifice of the city, with soldiers dressing as civilians in the hopes of fleeing as refugees. Japanese soldiers showed no mercy to the Chinese army once captured, murdering them in large scales that the nearby Yangtze river was full of corpses. With perversion and a fetish for murder the Japanese soldiers ran a competition between officers and who could behead the most Chinese prisoners. Others were used for bayoneting practice, soon the civilians in the city would also suffer.

The photos inside the book reveal frozen moments of horror, the morbid memento of vulgar savagery as young women lay splayed naked having been raped and then mutilated to death by the soldiers of Japan. One photo shows a bayonet still deeply embedded inside a dead victims vagina along with an image of many severed heads. Another photo is of bound Chinese coiled in fear as Japanese soldiers plunge bayonets into them with sadistic malice under the guise of training. Chang no doubt came across scores of other photos, many taken by official Japanese government photographers, though the ones contained in the book only add a sickening weight to the written accounts.

Acts of individual courage such as those exhibited by Li Xuuyin, the pregnant eighteen year old who fought of several Japanese soldiers with her bare hands. Determined not to be raped by them she suffered 37-bayonet wounds before she was left for dead by her tormentors. It would take several months for Li to recover but she would go on to live a long life as a grandmother. To the children who had their heads doused in gasoline then set alight or who were imprisoned, tortured and bludgeoned in the face only to escape to a hospital. Their photos a frozen reminder of what men are capable of. And the lone surgeon in the city at the time, Doctor Robert Wilson who tirelessly fought to save lives with his volunteers and little resources.

The book includes the Japanese critics of the atrocities from official photojournalists reporting what they witnessed with revulsion and numbness, unable to stop events only to record them with cold honesty. None of then cheering or condoning the actions of the military. Japanese General Iwane Matsui was the initial commander in the operations around Nanking, once reports of murder, rape and looting had reached him, did his best to scold those involved. He would then go on to tell anyone that would listen about the ill-disciplined atrocities of the soldiers in his charge, “My Men have done something very wrong and extremely regrettable”, Matsui in a toast over dinner to a Japanese diplomat. Retiring from the army in 1938. he would then go on to be tried and executed for war crimes by the allies.

To curb the rape frenzy of the Japanese soldiers and prevent venereal diseases, the military hierarchy created the ‘comfort women’ system. Whereby females, most against their will, were recruited to serve as pleasure slaves to the soldiers of empire. As a means of reward and to control the deadly lust of its men, the Japanese government provided them with girls and women to rape. One of the many lessons that the military had learned from its expedition into Nanking.

As a book it is well written, not just a compilation of statistics and facts. Chang is a talented writer who gives life to the many victims, her extensive research and interviews allows her a degree of intimate revelation which only makes the subject matter harder to swallow. A well edited and presented book that gives the reader space to digest the information, while flowing chronologically and naturally with respect to those inside the pages. You do not read this book to enjoy it or to be entertained but to pay respect to those who suffered and to learn about the shared history of the world.

Iris Chang wrote a book that is a reminder that humanity can be terrible and cruel though even when the powerful are inflicting such terror against the innocent, individuals will stand up with courage and risk everything to help strangers. In her own way Iris Chang did that herself, as a young woman she undertook the task to tell the many stories of a horrible history. Facing scorn and death threats, along with the brutal reality of the subject matter Chang slipped into depression and took her own life in 2004. Her book is a testament to her willingness to tell the truth, to champion the lost victims of history and to put faces to the forgotten many who remain lost and decomposed in unmarked graves. The Rape of Nanking is a crime of the Japanese government and the individuals who were responsible for the atrocities. What occurred isn’t unique to the Japanese but applies to all of humanity.