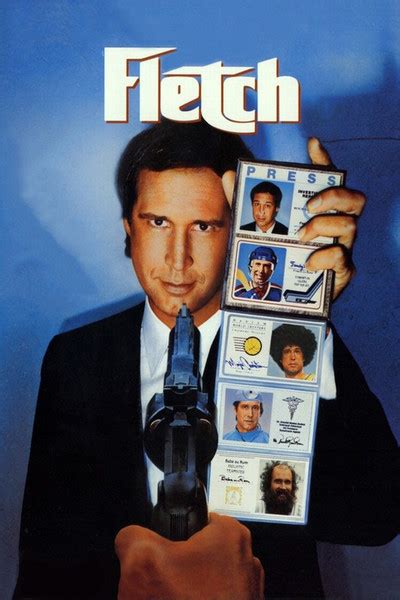 Fletch lives in the courageous pen of reporters

Fletch Lives in the courageous pen of reporters

“I must follow the journalistic instinct of being skeptical of everything until I personally have proved it true.” Irwin Fletcher, Fletch written by Gregory McDonald

In the post-Watergate world fiction was full of lone wolf reporters, the courageous typewriter and camera that pointed where it was unwelcome. When author Gregory McDonald wrote his first “Fletch” novel in 1974 about reporter and former marine Iriwn M. Fletcher or ‘Fletch’ AKA ‘Jane Doe’, it would develop into a series of books, two movies starring Chevy Chase and a remake to be released this year. In the first book and movie, a world of police corruption is unravelled after a man approaches Fletch, requesting that the undercover reporter murder him so that he can claim insurance for his family. The man alleges to be dying of bone cancer. This request stirs a curiosity in Fletch which unravels a plot of a double cross, fraud and a police supplied drug epidemic.

Written in a time when even the highest office was no longer above investigation and condemnation Fletch followed his instincts, writing on what he discovered while uncover. Risking reputation, income and his life. The era of heroic reporting would span into the age of Wikileaks. Though for a time it was celebrated, when Daniel Ellsberg turned over the ‘Pentagon Papers’, he took great risk. The New York Times then published the information revealing the hubris and depth of deception that the US government possessed in its war on South East Asia. The editorial staff of the New York Times could have sat on the information and participated with the government and perhaps in the 21st century they may very well have done so.

Make no mistake do not confuse courage and integrity for truth with moral character, the book version of Fletch is not a good man. In the first novel he uses a fifteen-year old addict even having sex with her, his empathy for her seemed to be related to what information she could provide, she was not a human being only a source. When she dies, he loses the information that she carried with her. The singular pursuit of revealing information can easily be romanced and seem noble, it can also come at a cost to human dignity and the human ability to compromise to the greater good. One teenage ‘junkie’ can be sacrificial beneath a greater story, for an example as in the case of Fletch. Fletch even takes the money and runs after exposing the corruption, only to return where he almost began in the subsequent novels. Fletch is cynical and written from the purgatory of distrust and numbness, maybe that is where we are now.

The 1980s would celebrate the tradition of the rogue reporter, romancing them with an adventurers avatar who dodges bullets, suffers torture and conducts espionage like a James Bond in order to find the facts and reveal evil. The champions of the innocent, heroic untouchables who were incorruptible and fearless. Whether it was James Woods in “Salvador” or Nick Nolte in “Under Fire” these were individuals of courage. The media did not have to be a propaganda mouth pieces for the regimes of rule or advertising copy announcers, the relationship between the suffering and the general public required the conduit of reporters to weaken the powerful, shame them and even over throw them. It was the aftermath of Bernstein and Woodward, names of now journalistic fame thanks to their efforts in breaking the Watergate scandal.

The massacre of innocent civilians in My Lai, Vietnam was a sobering reality for those who were able to read about it. The rape and murder of women and children by US soldiers could have been another event of unmarked graves if it was not for the investigative curiosity of journalist Seymour Hersh. The US government had been keeping details of the massacre concealed, when Hersh heard rumours about the court martial of Lieutenant Calley for his role in the murders, his investigation began. Once Hersh had interviewed and investigated he reported on a dangerous event that undermined the US governments policy in Vietnam. Sparking criticism and reactions all the way up the White House. The courageous pen of a reporter challenged the highest authority again and reported the truth.

Men like Robert Fisk lived this life, though he would die in the days when reporters like him would become a rarer specie. Those who are not seduced by becoming embedded with ‘friendly forces’ or those loyal to a particular side in a war. Instead the blabbering face on a screen or paid keypad masher has become the norm inside the realm of ‘credible’ media where the corporate and State run entities spit out homogenised filth that no longer challenges authority, only serves it. And when inconsistencies or outright lies are apparent, business as usual continues. Perhaps saying as much about the viewer-readers bias as it does those propagating the information. The instinct of curiosity seems to have been long lost, it is after all safer and financially smarter to not posses them.

We are fortunate to have many who still continue the legacy, they risk themselves for the pursuit of truth. In the case of Shireen Abu Aqleh who was likely assassinated by the Israeli military while she was covering an IDF raid in occupied Palestine or the brutal murder-torture of Jamal Shashoggi by the Saudi government. Not to mention the many reporters murdered in horrific manners and numbers by cartels in Mexico. Terrorists, criminals and governments alike often target journalists and reporters for the words that they write. Failing that as a threat, censorship and professional practices within media organisations act as another deterrence to ensure a bias and loyal media to the government or a particular regime.

Modern technology and access to the internet has given many of us the ability to seek those who report the truth for us. If one is willing to look for them, they exist. They may specialise on certain subjects or they may be broad with a curiosity for information. They may focus on corporate corruption and misconduct, to the crimes of specific national governments. As the reader and distant voyeur we have the ability to hear and read them, to witness from afar the horrible things being done by those who are powerful and have so much control against the lives on others. Many of them are independent and rely upon the private donations and support of their readership, free of the editorial interests of corporation or government regulations.

So as the new Fletch movie comes out, perhaps we can celebrate the tradition of the past by championing Julian Assange who in decades past would have been considered a hero. A champion for free information and truth, no matter how hideous or dangerous it may be. With more access to media and information the mainstream culture has turned away from a desire to be informed from as many sources as possible, instead generating a digital realm of bias and comfort input. To be challenged, to read or hear the truth even when it goes against the grain is undesirable. Instead such a media culture keeps men like Jimmy Saville protected until his death and a man like Julian Assange behind bars because he published the facts about war crimes and corruption. A good journalist puts a mirror to the face of power, evil and society itself, how we react to that reflection says more about us than those who hold up the mirror.