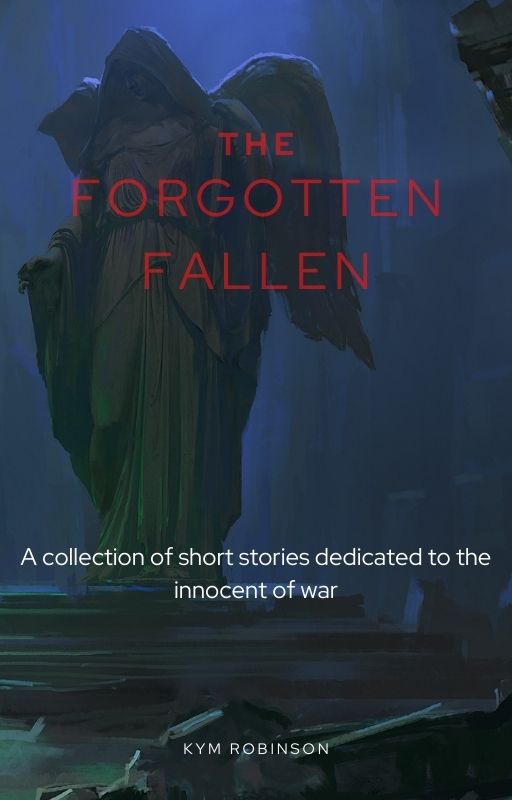 The Forgotten Fallen story – Does it Ever End?

A collection of short stories dedicated to the innocent of war.

Does it Ever End?

“Does it ever end?” The small boy held onto the banister as the ship beneath him rocked and heaved upon waves that were taller than anything he had ever imagined.

“Everything ends” His mother smiled. She ran her hand across his fluffy head of hair and then wrapped a wool jacket around him. It had been two days since they had been on the ship, a large passenger liner. Two decades old, it had taken families across the ocean in peace, then in the war it became a troop carrier, then hospital ship and now it was weighed down by the thousands of refugees that clung to its decks fleeing a war that was near its end.

The mother steered away from politics, she had lost her husband to the war and feared that her brother was gone as well. Her son would be old enough soon to be press ganged into service, they were taking boys as young as eight and giving them rifles to shoot at tanks. She had done things that her nightmares would remind her. She did all to make sure that she and her son were able to make the ship. Now that it was on the open seas, she did not feel any more at ease.

The alarm sounded, the mother pulled her son from the banister. The grey ocean crashed and lapped at the ships hull as the captain steered it on an evasive course. She had been in the war enough to know that aircraft loomed. She pulled her son into her chest, around her the crowds of other passengers stayed low and clung to anyone or thing that they could. The ship was over loaded and a fat target for any aircraft. But no bombs fell.

“It’s only a spotter” a crew man yelled. Relief washed across those that could hear. The mother kissed her sons forehead.

“Are we going to drown now?” The boy asked, as he held his arm around his mother.

“No my sweet child, it was just an alarm” Her son held her tighter. All he had ever known was war, the austerity of embargoes and the need to assist the war effort. He had only ever known hunger and the cold. War was endless for him. He knew his father in letters, photos and when his mother wept at night holding a jacket against her chest.

The night came in slow and cold, the waves splashed and rocked the ship. The deck was wet, those who were inside had the luxury of over crowded rooms and stale air. But it was at least dry. The mother and son clung to one another hiding inside the only clothes that they owned resting on a small bag that they could use as a pillow. They had slept like this before, in the bomb shelters, on the side of the road and in a forest while they ran from an advancing enemy killing all in revenge. Mother and child were not safe from such a murderous vengeance.

The mother fell asleep, she was exhausted. She had slept in shifts, her mind waking her hourly so that she could check on her son and make sure that no one was coming for them. Now she fell heavy and her body collapsed against his. She slowly woke in the darkness of morning, aches from the hard floor pulled her from any rest.

“My dad was a soldier, he died though”

“I am sorry to hear that my dear, my two sons were also soldiers. They both have passed in the war.”

“Maybe they knew my dad?”

“I wonder if they were friends? Do you think that my dad would have told your sons about me?”

The mother opened her eyes and saw her son speaking with a woman a generation older than her. The older woman was grey and sunken, she rested on the deck in a wrapped blanket. Her tired eyes remained friendly as the moonlight washed across her thin hair.

“You are supposed to be sleeping” The mother ran a hand through the boys hair as she pulled him close to her making sure that he took some of her warmth.

“This is a mum of some soldiers that may have known dad” the boy introduced the two mothers,

“I am sorry if he kept you up, he has a habit of being a bit of a chatter box.”

“Oh dear, don’t be. He was keeping me company. I was unable to sleep” the older woman adjusted her slender frame as comfort escaped her every effort.

The mother fell back asleep with her son snoring in her chest. They were both woken by cheers, followed by the drowned out sounds of music crackling on a gramophone.

“What has happened?” the mother asked as she sat up.

“The war, the war is over” a man cheered.

Despite the smiles and looks of relief there were those who remained grim and silent, the deck was a mix between those celebrating a birthday and those mourning at a funeral.

“We lost the war, it is no time to celebrate” an aged man with one leg snapped.

“Yes but it is over now, no more killing” the old lady replied.

The mother did not feel joy or sorrow. She clung to her son as the many bodies moved about the deck.

“Can we go home now” her son asked as he watched the others around him celebrate or grieve.

“No, I don’t think that we have a home left any more.”

The ship floated for five more days, lost at sea and with no port welcoming it. Many grew sick from the sloshing motions and then hunger and thirst set in. The mother watched her child eat dry biscuits, she had not eaten in the two days and only sipped the dirty water when she had to. Each time her child offered her some biscuit she smiled, “You need it to be big and strong”.

With a degree of guilt her son ate the biscuit, flavourless he chomped it as his young eyes watched the expanse of ocean. The sight no longer fascinated him. It was late afternoon before the tired bodies on the ship stirred to life.

An alarm sounded, the ship began to turn, a loud explosion followed by the angry buzz of aircraft above. The mother pulled her son against a nearby tower, the ship lifted and then another explosion ripped it apart. She ran from the broken hull, as the ship began to slip beneath the water. She had no life jacket and was barely a good enough swimmer in her youth. Now she held her son, lifting with every ounce of strength she ran among the panicked crowds as people clung and clawed at the uneven motion of the dying ship. The mother stood in line with her son waiting to climb onto a life raft.

The passing aircraft had finished dropping their bombs and began to strafe with machine gun and cannon at the ship and those now on the life rafts. Exhausting their ammunition the pilots flew into the horizon, leaving death and desperation behind them,

“But the war is over, they won! Why?” a crew man asked as he helped others onto a life raft.

The mother held her son as they sat on the lowering life raft. It was over crowded and the water lapped at and into the boat, two men jumped over the side and into the cold water. They swam and pushed the raft as best as they could. Another explosion from the ship blasted shrapnel and sent splashing waves across the survivors. Mother and child fell into the ocean. The water was cold and sucked the air from them both.

“Are we drowning?” the boy asked as he clung to his mother, who pulled them both near the wood of the broken raft.

No one spoke, the few survivors nearby clung to the clumps of wood and shivered in the cold water. The old lady floated nearby. A crew man slipped under the waves his water logged clothes and boots pulling him below. The mother held her son as close as she could, his lips blue and his jaw trembling. She was too cold to speak.

The night washed into a cold morning. Clamping her fingers onto the wood, the mother held her son, she was determined to reach sunrise. It would be warmer when the sun came up. She tried to stop the shivering so that she could speak to her boy, it was difficult to do but she managed briefly, “Hold on, stay with me”

“I’m cold” he muttered against her as the waves pushed and pulled at them. She could not promise him warmth or a dry reprieve. She could only love him, hold onto him, cling to the raft despite the pain and fatigue for that moment longer. The sun would be up soon, soon she it would be light, she promised her self.

“It hurts” her son trembled.

“I know honey, hold on and stay with me”

The sun slowly rose on the horizon, the mother opened her eyes. She could barely hold on to the wood. The cold water had caused her mind to slow, she turned to her son. She was still holding him with one arm. He was limp and floating, she lifted his head. His face was in the water. It had seemed like just minutes before she was awake and watching over him. He was not breathing. He was cold. She shook him, she opened his eyes. He was gone. She could not scream or yell. She held him, she tried to push him onto the wood, but he was too heavy. She tried to pull him from failing beneath the waves.

The mother held him, the sun was now above the horizon when she no longer could stay afloat. The ocean claimed them both. A wet darkness. It would finally end. The war had taken everything from her.